The story of King Henry VIII’s creation of the Church of England is well-known in its basic outlines, vociferously debated in its details. Did the infamous English monarch aggressively pursue Anne Boleyn or did he succumb to her seductions? To what extent was he motivated by lust, to what extent by infatuation, to what extent by a desire for the male heir he believed essential to his country’s political stability after the Wars of the Roses? Among the leading Englishmen of the day who were actively committed to separation from the Catholic Church how many wanted a caesaro-papist one which maintained most Catholic beliefs and practices, how many were committed to pseudo-reform along Protestant lines? 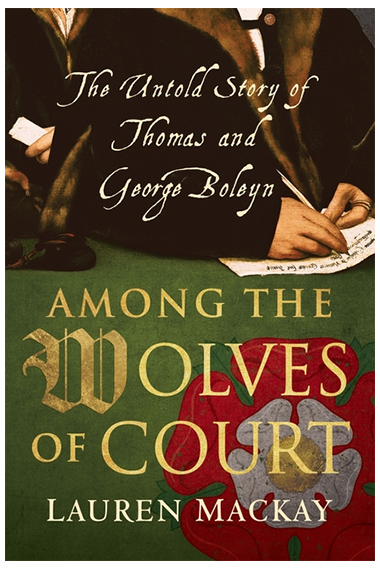 It is only natural that each new book released on that period of English history will claim to break new ground in its attempt to answer such questions. But few live up to such claims even a quarter as well as Lauren Mackay’s Among the Wolves of Court: The Untold Story of Thomas and George Boleyn.

Though somewhat overdone as a case for the defense, Among the Wolves of Court convincingly shows that common depictions of Thomas Boleyn are seriously flawed, at times contradicting demonstrable fact and at times treating debatable interpretations as indisputably factual. He most certainly was not the relative non-entity of legend, a man who rose to prominence merely because of his two daughters’ successive romantic relationships with the king. He was, instead, a first-rate diplomat, an amateur scholar who intellectual accomplishments were held in high esteem by his friend Desiderius Erasmus and a good athlete whose aristocratic milieu expected such prowess. The family into which he was born was closely intermarried with the nobility and his maternal grandfather was an earl, though it was recently self-made in the direct male line. In short, his daughters’ influence with Henry VIII undoubtedly facilitated his advancement but did so only by giving him an edge over the mere handful of other highly qualified men and well-connected men who were his rivals.

With such facts in mind, Mackay argues that Thomas Boleyn would not have promoted his daughters either as royal mistresses or (until the king himself had decided upon such a course of action) as replacements for Henry’s queen, Catherine of Aragon, as long as the latter remained alive. He was, so she argues, too astute a politician to play such a dangerous game, one in which success could not provide his ambitions with more than moderate assistance but in which defeat could be utterly disastrous.

Like those which she attempts to refute, Mackay’s interpretation of the facts is to a considerable degree grounded in a series of mutually reinforcing assumptions and interpretations, but by presenting an alternative of at least comparable plausibility she does show that a serious re-examination is called for. She also contends that, though he rejected the authority of the Catholic Church as a judge of marital validity, Thomas Boleyn was too moral a man to favor his daughters committing either adultery or fornication with a king to whom they were (by anybody’s standard) not married, an opinion which bring up the interesting question of his religiosity.

Early in his life Thomas Boleyn was conventionally Catholic. Later (like Saint Thomas More) he entered into the Christian humanists circles associated with Erasmus, circles which included some who were of exemplary orthodoxy and some who were clearly heterodox. In his later support for the creation of the Church of England he seems to have embraced views which would later be termed Anglo-Catholic. How much his departures from Catholic orthodoxy were influenced by heterodox forms of Christian humanism and how much by a desire to see his daughter married to the king is open to speculation. That he opposed his daughters engaging in extramarital sex does, therefore, seem likely enough, though Mackay does not give consideration to the fact that, if this was the case, the combination of such an attitude with his political skills could mean that Thomas Boleyn played a greater role in fomenting schism that has previously been thought—either because of pre-existing heterodoxy or out of a need to salve his conscience.

George Boleyn, who died at the age of only thirty-two, receives only secondary consideration in Mackay’s book and, as in the case of his father, it becomes clear that many commonly repeated beliefs about him lack substantial proof. His opportunities to demonstrate his abilities were somewhat limited but even if his talents did not rise above the level of the ordinary he cannot, in the absence of new evidence, be passed off as a mere fop.

Perhaps the most refreshing thing about Mackay’s book, and the thing which allows it to be packed with truly new information and analysis, is the extent to which it remains firmly focused on its professed subject matter—the life stories of Anne Boleyn’s father Thomas and brother George. Her work is not, like many biographies of her subjects’ contemporaries, more or less a broad histories of the period in which a particular is, at best, given special emphasis. In contrast to this approach, Mackay uses the major events of the period as simple “mile markers,” without explaining what they are or their more general significance, mentioning them briefly for the sake of context and giving substantial consideration only to the direct role which her subjected played in them or the impact which they had on her subjects’ lives.

This does mean that her book is best suited to those who have a good basic knowledge of the period but is not for that reason a special volume inaccessible to the average reader. Those who have read one or two good introductions to the period should have sufficient background knowledge, and Mackay’s narrative is clear and as succinct as a full presentation of her material will allow, her prose unmarred by academic opaqueness.

Undoubtedly Thomas and George Boleyn rank among the villains of history but are not for that reason undeserving of an accurate appraisal—one which has the potential to be both in some ways redeeming and in some ways damning. On the one hand a good case (at the very least) can be made for the view that they were not so sordid as to merely pimp their close female relatives to the king, and were not so inconsequential as to have any cynical “need” to do so. On the other hand, the very facts which can be used to defend them on those points may well imply that they played a more important role in promoting other evils than has often been believed.

Among the Wolves of Court: The Untold Story of Thomas and George Boleyn
By Lauren Mackay
I.B. Tauris, 2019
Hardcover, 312 pages

New York, abortion, and a short route to chaos

It was the celebration that was particularly galling. On the 46th anniversary of the Roe v. Wade decision, the governor of New York, Andrew Cuomo, signed into law a protocol that gives practically unrestricted access […]

St. Thomas More and the tribulations of our time

State-imposed lockdowns, suspended sacraments, locked churches, city riots, vandalized statues, “cancelling,” educational upheavals—these tribulations rippling from COVID-19 have rocked Catholics and the practice of our faith. As the pandemic gripped the country and the months […]