Mike Aquilina is a prolific writer and editor, with many of his books focusing on life in the early Church. He is executive vice-president of the St. Paul Center for Biblical Theology and he has hosted eleven series on EWTN and two documentary films. One of his most recent books is Villains of the Early Church: And How They Made Us Better Christians (Emmaus Road Publishing, 2018), an intriguing look at some of the most profoundly scandalous and treacherous figures—Christian and non-Christian alike—faced by the Church in her first centuries. Often humorous and always fascinating, the book delves into the lives and actions of Judas, Pontius Pilate, Marcion, Diocletian, Arius, Nestorius, and many others. 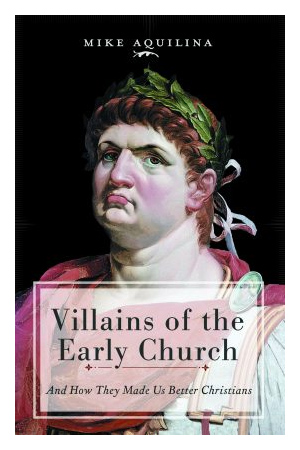 Aquilina recently spoke with Catholic World Report about this book, and the way in which the tales of these villains can be beneficial to today’s Christian.

CWR: How did the book come to be? Was this an idea you took to the publisher, or did the publisher approach you?

Mike Aquilina: I accept full blame for this act of villainy — or villainology.

I’ve been reading the early Church Fathers for many years, and long ago I noticed that their most entertaining passages were directed at their enemies — persecutors, heretics, apostates, and crooks who bilked the Church. The Fathers were masters of rhetoric, and they could write wicked satire. They could produce parodies that hit the mark rather exactly. The true virtuoso, like St. Jerome, could compose hilarious, punning works of biblical interpretation to call into question a heretic’s salvation — and, incidentally, his masculinity.

At some point it occurred to me that a book of the Fathers’ invective would be very funny but also very helpful.

I often run into people who are discouraged by the state of the Church or the state of the world. I think it would comfort them to see the challenges the early Christians faced and to know how these challenges were overcome. The ancient enemies make ours look puny. Nero had all the power in the world at his command. Marcion was as rich as any Fortune 500 CEO. Valentinus was an academic of international repute. Arius was a man of extraordinary gifts — a coalition-builder and master of marketing and advertising. But where are they now? And where is their doctrine?

The ancient villains roused the ire and energy — and good humor — of great saints like Irenaeus and Athanasius. Today’s villains will do us the same favor. We should strive to be the saints who can respond.

CWR: How did you go about selecting the figures who are featured in the book? Why these “villains,” as opposed to others?

Aquilina: I tried to gather a good variety. I didn’t want to tell the same story over and over. So I chose some villains who were Christians and others who were not — and one who was a particularly nasty ex-Christian with a grudge. Whenever I found villains whose stories were roughly equivalent, I opted for the material that was funnier.

CWR: Why look only at the early Church, and not the rest of Church history?

Aquilina: Ha! Look at the list of books I’ve written. Apparently it’s all I know how to do.

But it’s true that the Catholic Church recognizes a certain distinctive authority in the early Fathers. They were the men who produced the great classic canons — of Scripture, of liturgy, of the creeds, and of discipline. Joseph Ratzinger called their work “constitutive” of the Church’s faith. The Catechism calls them “always timely witnesses.” Cardinal Newman spoke of the power of their testimony even to non-Christians.

CWR: Some people might ask why we would spend our time studying villains of Church history, rather than saints. What do we have to learn from these figures?

Aquilina: As I said earlier, sometimes it was the villains who made ordinary men into great saints. The villains sharpened the saints’ minds and arguments. They toughened the saints. They drove them to bold action and even martyrdom. They provided the hardship that proved Christian mettle.

CWR: The chapter on Caiaphas brings to mind some other situations. He was a sort of government-recognized high priest, even though many Jews still recognized Annas as the high priest and said the Romans had no power over the position. This brings to mind Henry VIII, the imperial prerogative in papal elections, and even China today. What do you think we can learn from Caiaphas, especially in light of these other issues?

Aquilina: There’s an old saying: history doesn’t repeat itself, but it rhymes. That’s true. We can see certain patterns in the villainy and virtue of the players on the world stage — from Henry VIII to Woodrow Wilson and beyond. We can probably see those patterns play out in our parish and neighborhood, too. I find history immensely helpful in my own life as I face problems that are supposedly new. It gives consolation. It suggests strategies. It prevents me from repeating mistakes that are older than the hills of Jerusalem.

CWR: It’s interesting to me that you chose to feature not only the biblical narrative and other reliable, respected sources, but also some of the stranger stories from less-trusted sources (a great example: Judas and his trouble with chicken dinners). Why did you decide to include these sources, as well?

Aquilina: The apocrypha are often hilarious. But they also show us what some, and perhaps many, Christians were thinking at the time — how they felt about the villains and the corresponding heroes. I find it deeply moving that the Christian authors of these ancient potboilers often tried to find a way for the villains to be saved — or they genuinely tried to understand how a villain so gifted, like Judas or Pilate, could refuse a chance at salvation.

Aquilina: I hope to inspire and entertain readers. I hope to make them want to read more early Christian literature. I hope to make them laugh. When I was recording the audio version of this book, I laughed so hard while I was reading the material that we had to schedule another day in the studio.

CWR: Was there anything you learned over the course of writing the book? Anything particularly interesting or surprising?

Aquilina: I’m always astonished by the art and the freshness of the Fathers. They seemed to keep the vigor of youth, even in extreme old age. They kept their sense of humor and creativity. Friendship with Christ will do that for you, I think. I hope never to lose it myself — never to become a villain, even if I never reach the stature of hero.

Comprehensive ideological systems, which determine the prevailing world view in societies and cultures, are based on so-called “grand narratives”.1 Such grand narratives are mostly of a religious nature. In earlier phases of human cultural development, […]