Dawn Eden Goldstein came to my and many other people’s attention back in the early 2000s under the less Jewish moniker “Dawn Eden” as a rock journalist/historian and pro-life conservative blogger at “The Dawn Patrol” who also manned an editorial desk at the New York Post. The Post, long famous for clever, punning headlines, established the platinum standard—“Headless body found in topless bar!”—before her time, but Goldstein offered the tradition her individual talent with such offerings as “Cat killer’s meow culpa,” about an angry fiancé who killed his intended’s pet, and “The Lady is a Trump,” for a spread on a certain real estate mogul/reality television star’s marriage to a beautiful foreign model. 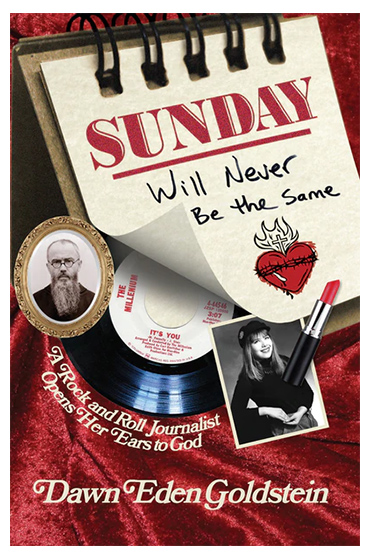 The last one she yelled out to a colleague as she left the Post building permanently in 2005, having been fired for making changes to a feature involving in vitro fertilization to indicate that in the particular story, while two implanted embryos “took,” one “died.” She also added background information about the usual destruction of embryos. This was too much even for the relatively conservative Post editors, who fired her. But Eden had a lot more on her mind even than her daily bread. It was questions about the Bread of Heaven that preoccupied her mind.

Would she become a Catholic or not?

It’s no spoiler concerning a book published by Catholic Answers to say she did. Her memoir Sundays Will Never be the Same ends four years later with the author, now a Catholic, starting to see Mary as truly her mother and being encouraged by the legendary Jesuit political philosopher Francis Canavan to get a doctorate and teach Catholic theology. Today Goldstein has that doctorate—the first woman to receive one from the University of St. Mary of the Lake—and has written five books dealing with chastity, sexual abuse, and God’s mercy (and edited a collection of Fr. Canavan’s Catholic Eye columns). But in the beginning she was just a lonely and somewhat lost little Jewish girl navigating the world of the sexual revolution and the Seventies.

Goldstein’s chapter titles (like the book’s title itself) are all taken from rock lyrics, a practice that will charm others who, like the author, have every song and band they ever knew in their mind. Even casual pop music fans will recognize many of the references and get a laugh. What are perhaps a bit more ambiguous are the choices to write the memoir in the voice of the Dawn as she was at any particular age and break up the chapters into sections denoting specific times and places, some labeled by the minute. About the latter decision, a certain amount of license seems warranted; and it’s possible the precocious writer kept diaries to get some of the dates if not times. Concerning the former, I think some readers will find such writing artificial and think of the “Hello Fellow Kids!” memes about politicians pandering to young people. Others (and perhaps the same people) will find something brave and honest about the exercise, especially when Goldstein writes about sexual abuse at the hands of a school janitor and the life of a latch-key kid whose divorced mother floats from boyfriend to boyfriend and spiritual guru to spiritual guru.

As real conversions are not strict logical progressions from one idea to another, but a chain of events, human connections, and lightbulb epiphanies that are often understood later, Goldstein’s telling of the story is quite believable in its series of fits and starts, seeds that are planted early and then watered and harvested later. At her sister’s bat mitzvah she is given a storybook covering Old and New Testament stories, the latter of which she devours even though she knows Jews don’t read these stories. At her own bat mitzvah she is disappointed that the cantor—a Jewish version of the Catholic prima donna cantor Thomas Day once labeled Mr. Caruso—made sure that young Dawn’s musical choices were not honored so that he could shine. But she still thinks of herself as Jewish and rather resents her mother’s religious gyrations from Hinduism to Mormonism and everywhere in between. In her teens, her own religion, at least in the sense of her ultimate concern, was rock music where she finds in live concerts the delightful yet transitory sense of “being something bigger than myself that takes me out of myself.”

It’s when her mother adopts Christianity—first Catholicism under the legendary Msgr. John Osterreicher (finally, her sister says, “a normal religion” for mom) and then Messianic Judaism—that things get interesting. I would have been interested in learning more about her mother’s religious instruction and experience under Osterreicher, a Jewish-convert priest who helped draft Nostra Aetate, but Goldstein seems to have had little contact with him, then seeing this “normal religion” as an irritant. A little later, now desultorily studying at NYU and mostly hitting the music scene, tracking down various Sixties performers, and writing in various publications, Goldstein was more struck for good and bad by her mother’s new religious friends, Messianic Jews who seem sincere yet “play up their Jewishness like they’re trying out for a Woody Allen movie.” Her mother’s pastor, however irritating (“Good night and God bless you, bubbeleh!”) challenges Goldstein to pray for something specific in Jesus’ name. Goldstein, desperate to find an obscure Sixties performer who will help her locate another obscure Sixties performer whom she wants to interview, wakes up in the morning knowing that Sandy Salisbury lives in Portland, Oregon, and enables her to track him down immediately. This 1989 “miracle” leads Goldstein to begin attending church with her mother and stepfather—and keep on praying.

A number of odd confirmations come from the world of rock. She interviews Del Shannon, best known for “Runaway,” and offers to pray for the success of his new record. He demurs, telling her “You can pray for His will for me.” Though the troubled performer later took his life, his words echo in her ears. The now full-time rock journalist and liner-note writer for albums discovers more: Ken Lewis’s “Little Bit O’ Soul” was an attempt by the “fervent Christian lyricist” to get a song with Gospel references on the Top 20 charts. And Ben Eshbach, lead singer of an alternative band called The Sugarplastic, introduces her to G. K. Chesterton.

Chesterton’s books and his followers in the American Chesterton Society (and particularly the New York chapter) encourage and prod her along. Piece by piece through the 1990s and 2000s Goldstein discovers Christian faith, both the internal act of assent to God’s work and eventually the external framework of the Catholic Church and dogma that incarnate that faith—even the sexual morality. And all this in the midst of work in the crazy world of secular journalism in Manhattan. and her own emotional and even physical health problems.

Whatever one thinks about the voices of her earlier selves that she adopts, the overall voice of the book is that of a woman who knows that the truth has set her free even if not all her problems have been solved. It’s the voice of a woman who has been taken out of herself into something truly bigger and learned a new and everlasting song.

Sunday Will Never Be the Same: A Rock and Roll Journalist Opens Her Ears to God
by Dawn Eden Goldstein,
Catholic Answers, 2019
Paperback, 255 pages

About David Paul Deavel 27 Articles
David Paul Deavel is Editor of Logos: A Journal of Catholic Thought and Culture co-director of the Terrence J. Murphy Institute for Catholic Thought, Law, and Public Policy, and visiting assistant professor of Catholic Studies at the University of St. Thomas. His book Solzhenitsyn and American Culture: The Russian Soul in the West, co-edited and introduced with Jessica Hooten Wilson, is now available from Notre Dame Press.

“Beauty is our guide”: An Interview with Dr. Glenn Arbery

Born in South Carolina, reared in Georgia, Glenn C. Arbery grew up as a Southerner and a Protestant. His reading of Flannery O’Connor as a freshman at the University of Georgia began his journey toward […]

“Life’s gonna give you a gutful of reasons to be angry,” a mysterious stranger tells Stuart Long (Mark Wahlberg) near a key turning point in his ambivalent quest for meaning. “You only need one to […]