As he has explained with some patience on other occasions, Reza Aslan has studied religion for more than 20 years. He is happy―at least he does not demur when some does it―being described as “an acclaimed public religion scholar.” He has four earned degrees, including New Testament studies, and he is fluent in several languages beyond his fluency in Koine New Testament Greek. Aslan has written works on the history of Islam, Mohammad, Jesus, terrorism, and Islamic fundamentalism. 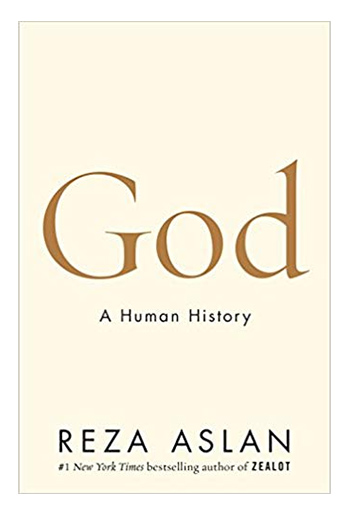 From all that, you need to know: His assertions on religion are unquestionably unassailable. Just ask him. So when at the conclusion of God: A Human History, he tells us that pantheism is really the best religious show in town everybody and just everyone, should take his opinion for their own. “God is every human and every human is God.”

The series was supposed to show how to get along peacefully by understanding one another’s religious world views. CNN abruptly canceled the series after Aslan tweeted a crude, scatological characterization of President Donald Trump, doubtless a vocabulary malfunction by an otherwise acclaimed public religion scholar. Huffington Post contributor, Vamsee Juluri, a media studies professor at the University of San Francisco, called the series “reckless, racist, and dangerously anti-immigrant.”

Believer did have fair ratings for being a CNN production, with 787K viewers for one of the early episodes. That put it in the middle for the same cable time slot between MSNBC (149K) and in the tank compared to Fox (1.6K). Among younger viewers (18-34) Believer beat both Fox and MSNBC. That somehow makes me uneasy.

I know, I know. I’m supposed to be reviewing God: A Human History and I will, promise. But reading it sent me off to another of his books, Zealot: The Life and Times of Jesus of Nazareth.

Zealot falls into a standard attempt to swift out the Jesus of faith (the mythic dude of doctrine and dogma) from the real Jesus of history who started life in Nazareth and ended up on a Roman cross. What Jesus did or did not do before becoming the object of Christian preaching is what surveys like this―called “historical-critical method”― are suppose to tell us. In the end they actually tell us little. So many different versions of Jesus have emerged in the last two centuries that Mary Magdalene’s complaint actually makes sense: “They’ve taken away my Lord and I do not know where they have put him.”

Aslan’s Zealot is a revisionist’s delight, rejecting miracles and such out of hand, as Thomas Jefferson did with his Bible, carefully shorn of everything except the “ethical” Jesus. Aslan is tentative about the resurrection, going only so far as to admit the disciples of Jesus did in fact believe he had been raised. Whether that counts for anything is something else. In revisionist presentations, the post-crucifixion Jesus is no longer accessible to history.

But like other revisionists Aslan is a selective literal Biblicist. If there is a verse or section supporting his interpretation it becomes, let’s say, Gospel truth. He’ll use it without hesitation, cherry picking through the New Testament for verses that seem to support his view. Verses that do not are debunked or ignored.

He accepts late dating of the Gospels (certainly nothing before 60 AD), another revisionist claim about the unreliability of the New Testament witness. Most historical-critical studies do not even bother with the arguments endorsing earlier dating, closer to the actual witnesses (for example, John A.T. Robinson’s 1977 Redating the New Testament).

The revolutionary “zealotry” of Jesus is an old proposition and, thanks to new studies, not regarded as seriously as before. I do not, in fact, see much in Zealot that Albert Schweitzer did not already cover in 1906 with his The Quest of the Historical Jesus. Schweitzer saw Jesus as a somewhat fanatical End Times preacher. Quest, though, is a no-show in the notes. More interestingly, S.G.F. Brandon’s more recent 1967 book, Jesus and the Zealots, receives but scant attention in Aslan’s notes, while forming the essential story outline Aslan adopts.

Zealot is a somewhat polemical attack on the Christ of faith, bounced off an antique theme already familiar to us from previous works. There is little here that contributes to the scholarship. (Of course, I have only a M.Div. and barely escaped alive from seminary Greek, so I may not be the best source.)

We are told in God: A Human History that humans humanized divinity. Aslan argues the gods we worshiped are ultimately representations of our selves, though enlarged versions. If that is hard to do in only 171 pages of text, he does have another 120-something pages of notes and, besides, he is an acclaimed public scholar of religion.

According to Aslan, we started out with ancient animism (all things are imbued with “spirit” including dead ancestors and rocks and talking trees). We moved up to becoming polytheists (many gods cooperating or vying with others) as life became more complicated. Then we discovered the council of gods, who ruled with a chairman of the board, very much as early Mesopotamian city states governed themselves. There is also henotheism (there is one god but we cannot deny the possible existence of others). There was also tribal monolatry (this is our god, too bad about yours) and on to the one sole god of monotheism (there are no other gods; they do not exist, get over it). He drops Christianity into a unique category, tritheism (three gods).

But why would human beings spiritualize animals, rocks, trees in the first place. Because humans were convinced they were ensouled beings. We had a sense of “soul.”So far there is no settled opinion on how we got our “soul.” I guess, a hunch, this came to us when we realized that somehow we were fundamentally not like the animals; we knew we would die, and they did not. Knowledge of death is an occasion for soul-searching, assessing a projected future.

Our sense of ensoulment extended to everything, and animism was born, and everything else with it. Humans projected their own sense of “spirit” on to the things around them, including deceased ancestors.

By humanizing divinity our gods became pretty much just like us, in Aslan’s telling. We buddied up with them and our needs became their goal (which is only fair since we told them what we needed).

But the ultimate identification of divinity as human projection is the god-man. This reaches a pinnacle of sorts with the deification of Greek kings and Roman emperors, until the ultimate god-man, aka Jesus, Son of God.

Aslan cites cognitive studies, neurological research, and offers much speculation to support his contention. His notes describe a somewhat frantic search for a material biological solution that will explain what is nonphysical, a sense of consciousness existing beyond physical confines.

The point of the book is not that we are made in the image of God. Rather, we have made god into the image of us. Still, why would any god we invent be so disagreeably insistent on his justice, which is not infrequently so at odds with our own? Would a god just like us complain about, say, a boy snitching pears from an orchard?

Aslan takes pains to say this “is not to claim that here is no such thing as God, or that what we call God is wholly a human invention.” By this time, though, after everything else he’s said, what is the point of making that distinction? As he concludes God:

Believe in God or not. Define God how you will. Either way, take a lesson from our mythological ancestors Adam and Eve and eat the forbidden fruit. You need not fear God. You are God.

Of course he rejects the humanized gods and embraces pantheism (sometimes called Einstein’s god), which I regard as no-fault deal. If the universe is God, and God is the universe, and I am god and you are god, what have we got? Nothing, really. We have a deity whose central tenet “be a nice person” comes at no expense. Humans are so adept at self-rationalization, justifying their greatest failures as “doing the best we can.” A world full of people “being nice” will be a world of scary people.

He worships the god of pantheism, “not through fear and trembling but through awe and wonder at the workings of the universe…” Strange, I know couple real-time Catholic theoretical physicists who confront the universe with equal wonder and awe and still manage that while saying their rosaries.

The “universe is god” is an old, old temptation that mistakes creation itself for the Creator, and makes God terminal with the universe.