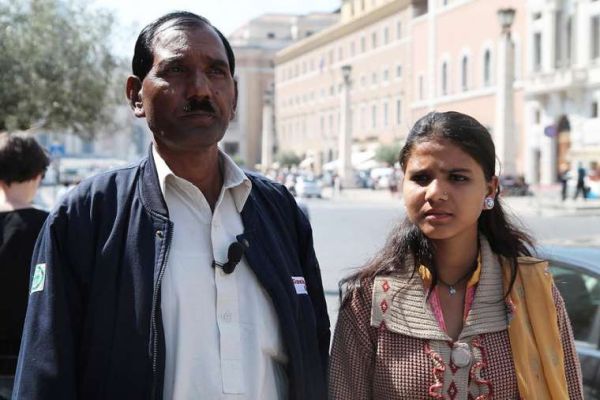 Canada, May 8, 2019 / 03:11 am (CNA).- Asia Bibi, the Catholic wife and mother who spent 9 years on death row on blasphemy charges in Pakistan, has left the country and arrived safely in Canada.

According to Spanish news agency COPE, Bibi, a Pakistani, has arrived in Canada, which has offered asylum to her and her daughters. Her health is reportedly in a delicate condition.

Pakistani government officials confirmed that Bibi left the country, but did not state her destination.

Bibi, 53, had been in protective custody in Islamabad since her death sentence was overturned at the end of October. The verdict and her subsequent release from prison sparked protests from Islamic hardliners who support strong blasphemy laws in the country.

Bibi’s imprisonment began in 2010 when she was convicted of blasphemy and sentenced to death by hanging. The charges stemmed from 2009 accusations that she had made disparaging remarks about the Islamic prophet Muhammad after an argument over a cup of water.

Bibi immediately appealed the conviction, which the Lahore High Court upheld conviction in 2014. She then appealed to the country’s Supreme Court. The Supreme Court agreed to hear her appeal in 2015.

Pakistan’s blasphemy laws impose strict punishment on those who desecrate the Quran or who defame or insult Muhammad. Pakistan’s state religion is Islam, and around 97% of the population is Muslim.

Blasphemy laws are reportedly used to settle scores or to persecute religious minorities; while non-Muslims constitute only three percent of the Pakistani population, 14% of blasphemy cases have been levied against them. Divinopolis, Brazil, Jul 8, 2021 / 15:00 pm (CNA).
When Fr. Chrystian Shankar, a priest serving at the diocesan shrine dedicated to Friar Galvão in Divinopolis, learned from a mother in the community that he… […]