From the rise of the “nones” to the eschewing of Christianity for Eastern spiritual practices such as yoga, the American religious landscape has been changing for decades. Clearly, the watershed moment was the countercultural 1960s. Danusha Goska, a gifted writer and scholar, came of age during this time. However, unlike many other Baby Boomers, she has clung to her Catholicism, and now she wants to share her faith with the world. Part travelogue, part spiritual memoir, part tribute to the natural beauty of the East Coast, and part collection of anecdotes on religion, society, and her own life that never bore, Danusha Goska’s God through Binoculars is a unique credo and affirmation of faith by a distinctive mind. 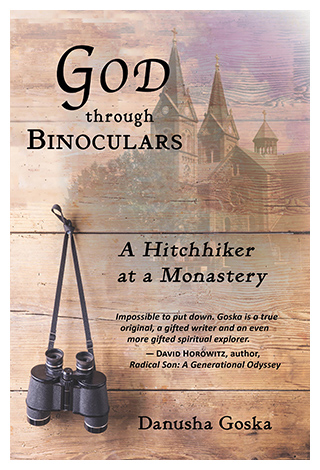 While her retreat at the Trappist Holy Cross Abbey in Berryville, Virginia, in the early 2000s is at the center of her memoir, it actually takes up the minority of God through Binoculars, which is in reality Danusha Goska’s spiritual autobiography beginning with her childhood. Goska notes that when people of faith experience suffering, “[e]veryone mentions the Biblical Job.” Reading her memoir, though, it is difficult to not think of Job. Like the long-suffering but faithful Old Testament prophet, Goska has gone through numerous difficulties throughout her life, yet has clung to her faith.

Goska was born in New Jersey to a family of working class immigrants from Slovakia and Poland. She was abused as a child. Later, her inner ear burst, which led to years of vertigo, vomiting, and the inability to navigate three-dimensional space. Not coming from a wealthy family, the costs of college were a burden, although Goska, a talented student, eventually received a scholarship.

Having graduated from college, Goska worked in developing countries in her twenties as a Peace Corps volunteer and eventually completed a PhD in the humanities from Indiana University Bloomington. Her dissertation on negative stereotypes of Eastern Europeans in American culture was later published in book form to much critical acclaim. However, she could not find a tenure-track academic job. Several prominent scholars she had counted on writing letters of recommendation died unexpectedly. Eventually, Goska ended up working as an adjunct professor making a princely sum of $6,119 a year living in the blighted, crime-stricken community of Paterson, New Jersey (Manhattan is where tenured faculty live, while Paterson is the home of adjuncts, she wryly notes). God through Binoculars brings to the fore American academia’s dirty secret, that of excessive reliance on adjunct faculty, people who usually hold doctorates yet make less money than fast food fry cooks and cannot count on such luxuries as health insurance.

God through Binoculars is Goska’s spiritual manifesto. She does not so much explain why she believes as how. Like St. Francis, awe for nature is at the center of Goska’s faith. “The more I learn about nature, the more I can’t be an atheist,” she writes. Her descriptions of the numerous species of birds in New Jersey’s Garret Mountain and the spectacular views of Manhattan, the Verrazano Bridge, and the spires of the Newark cathedral from its peak made me plan on devoting a few hours to the nature reserve during my next sojourn to New York.

Goska identifies as having ADHD, and this is evident in her memoir. The book does not follow a linear narrative and is filled with digressions. However, this is not a bad thing; her digressions are without exception fascinating. Many are related to the animal world, film, literature, or history. The best are her ripostes to Catholic progressivism and her barbs on some of her students who feel such an aversion to Christianity that they cannot admit how indebted they are to the Christian tradition even when she demonstrates that they have culturally Christian, not Aztec or ancient Greek, views on the value of human life.

She writes quite a bit on Thomas Merton, America’s most famous Catholic monk whose later life (and death) and writings were controversial. When discussing Merton’s criticism of Christian missionaries in developing countries, which he himself never visited, as aggressive agents of cultural imperialism, Goska offers this response:

When I think of missionaries, I think of Father Damien, who went to Molokai to serve abandoned lepers and died of the leprosy he inevitably caught there. I think of Peter Claver, who entered the hellholes of slave ships. With tears in my eyes I think of Maura Clarke and Ita Ford, Dorothy Kazel and Jean Donovan, who worked with the poor. They were stalked, beaten, raped, and murdered by members of the El Salvador national guard. I think of Gladys Aylward, a domestic servant. A thirty-year-old spinster, she sank her life savings on passage to China. She rescued discarded female infants and was one of the ‘arrogant’ Christian missionaries who played a key role in ending at least a thousand years of the crippling and torturous binding of Chinese women’s feet.

God through Binoculars is replete with such ruminations and amusing anecdotes. They all form a coherent whole, though, as they help us to understand why Goska believes. Atheist philosopher Bertrand Russell titled his famous essay “Why I Am Not a Christian”; God through Binoculars is Goska’s account of why she has remained a Christian throughout the years and many trials. At the center of her book is a retreat she took to the Trappist monastery in Berryville, Virginia, more than a decade ago. Facing a difficult financial situation and feeling hopeless, she could not even afford the retreat fee, but the monks waived it for her. She did find spiritual consolation, although not necessarily from the monks, but from her fellow retreatants (especially an Episcopalian with surprisingly similar academic interests she dubs “The Theologian”) and travel companions.

While a fine spiritual memoir, there are a couple issues with God through Binoculars. Goska mentions the declining number of monks at the Trappist monastery and provides a problematic diagnosis of the cause of state of affairs: “I am a member of a church where the voice of a lay woman is without value to the celibate male hierarchy making the decisions. Decisions that, lately, always result in a smaller and smaller Catholic Church.”

First, this diagnosis seems discordant with Goska’s previous spot-on critiques of Catholic progressivism. Changing the Church’s teaching on permitting only men to the priesthood will not stave off declining numbers. Since the 1990s, the Anglican Communion has allowed women to become priests and, eventually, bishops, which did nothing to end its decline. In less than two decades, the proportion of British adults identifying as Anglicans has halved, and among young adults only 3 percent are members of the C of E! Stateside, the Episcopal Church is not doing any better: Philip Jenkins, himself an ex-Catholic who swam the Thames, speculates that the rates of decline in his adopted Church are so steep that the last American Episcopalian may have been born.

There are dioceses in the West that are successful at attracting men to the priesthood. It just so happens that these vocations-rich dioceses tend to be orthodox and traditional, such as Portsmouth in England or Lincoln, Nebraska. Goska writes that during her retreat the monks used the writings of the Dutch priest Henri Nouwen, known for many things but not always for orthodoxy. This is a clue as to the source of the Virginia Trappists’ dearth of vocations.

Goska sometimes writes about gross things, and God through Binoculars does occasionally give us too much information, such as she describes the unique reproductive organs of female hyenas or Egyptian deity Sobek’s surreal copulation habits. However, Goska goes a little too far when she tries to drive home the point that Jesus was human and writes that He ate meat, drank wine, and was flatulent, using crude terms. This simply feels wrong.

Still, God through Binoculars is ultimately an erudite, touching, and sometimes even funny tribute to the Catholic faith that is difficult to put down and is an engaging look into the religious experiences of one Baby Boomer scholar who is eccentric in the best meaning of the word.

God through Binoculars: A Hitchhiker at a Monastery
by Danusha Goska
Shanti Arts LLC, 2018
Paperback, 274 pages

About Filip Mazurczak 69 Articles
Filip Mazurczak is a historian, translator, and journalist. His writing has appeared in First Things, the St. Austin Review, the European Conservative, the National Catholic Register, and many others.

It’s My Life, and I’ll Do What God Wants

The unlikely spiritual journey of a 1960s hit-maker Carl D’Errico, whose songs have been performed and recorded by The Animals, Neil Diamond, the Yardbirds, Gene Pitney, and […]

The Materialist in the Mask

A consideration of Fr. Martin’s “seven ways” of responding to the Nashville Statement underscore the truncated gospel (or even anti-gospel) with which Martin operates. […]