Like Maximillian Kolbe or Mother Theresa, Archbishop Oscar Romero has emerged in recent decades as one of the most beloved saints of what St. Pope John Paul II termed “our difficult century”. Romero was a model of holiness, peace, and calm during a period of hate, anger, and turmoil. In 1989, Paulist Productions – the film and television branch of the Isaac Hecker’s Paulist Fathers – produced their first theatrical picture, a biopic titled simply Romero. The movie was recently remastered for a Collector’s Edition, released to commemorate the Archbishop’s canonization on October 14th. I missed Romero the first time around because I was three years old, so this is a great opportunity to finally see the film. 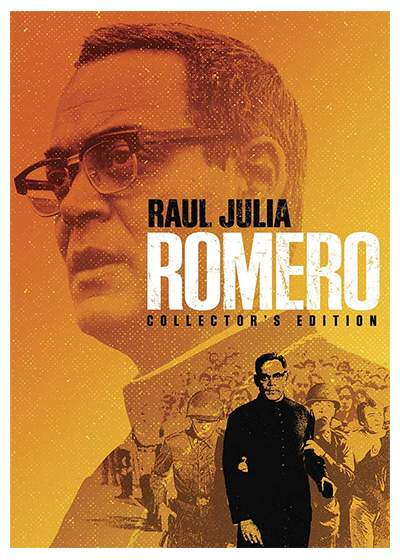 The latter half of the 20th century was awful for many Latin American countries, torn apart by political upheaval and ideological clashes. It was a sea of corruption and violence, and poor El Salvador was certainly no exception. In the 1970s and 80s, the small country was ruled by alternating groups of wealthy elites with connections to the military. Both fascism and communism flourished, with ordinary people caught in the crossfire.

Oscar Romero (Raúl Juliá) spent most of his formative years in Rome studying for the priesthood, earning him the reputation as a “bookworm”. Even after being appointed Archbishop of San Salvador, Oscar was slow to respond to the impending civil war. Yet when a close priest friend of his was murdered by government militia for protecting the rights of the people, Romero broke his silence. He spoke out against torture and political assassinations, even ordering members of the military to disobey their commanders if they ask them to go against “the law of God”. He became a champion of human rights, demanding fair wages for farmers and religious freedom for the Church. On March 24th, 1980 – after only three months of being Archbishop – he was shot dead while celebrating Mass for a group of hospital workers.

One common criticism of Romero, even during his life, was that he was a practitioner of Liberation Theology, aspects of which have since been condemned by the Vatican. While it is true that some Salvadorian priests worked directly with left-wing guerrillas – a fact the film does not shy away from – Romero himself was always rooted firmly in the Church and condemned violence on all sides. [See the recent CWR feature article “Three Common Myths about Archbishop Oscar Romero” by Filip Mazurczak.] The film details how he worked to free government officials kidnapped by the Communists and disapproved of priests being armed. Rather, he understood what the Church has always taught: Christ identifies with the poor and oppressed, not the rich and mighty. Every human is loved by God and deserves dignity, but the judgement of the nations (Matt 25:31-45) makes it clear that God wants men to provide for the needs of the poor, the sick, the imprisoned, and the stranger. I am reminded of a phrase my father would often repeat when a guest would express frustration about some political situation: “if you are getting criticism from both the right and the left, you are probably doing something good.”

The life story of Romero is compelling and inspirational, but that is often hard to see in a film that, quite frankly, has not aged well. Much of this rests with Juliá’s performance, who presents Romero as stiff, confused, and aloof. Even as his character changes, Juliá remains relatively monotone, lacking the ordinary humor and rootedness one often associates with a saint. Besides the protagonist, the acting is overly dramatic and sensational, while the pacing is uneven, being slow for most of the film, then suddenly lightening fast in its last few moments. Had this story been produced in today’s cinematic renaissance (at least in craftsmanship), it would have worked out better. Hopefully, some future filmmaker will one day revisit the subject.

When Romero premiered, the New York Times characterized the film as “a textbook.” This may have been intended as a slight but nonetheless highlights the movie’s main strength. Romero works remarkably well in the classroom as hagiography, but much less well as Saturday afternoon entertainment. Yet if the goal of art is to inspire man to greatness, then Romero does the job.

St. Oscar Romero, protector of the poor and champion of peace, pray for us!