New York City, N.Y., Aug 9, 2018 / 03:20 am (CNA).- When Christian author Rod Dreher published The Benedict Option last year, it generated a flurry of debate and comments throughout the Catholic and Christian blogosphere on theories of what authentic Christian community is, and what it is not. 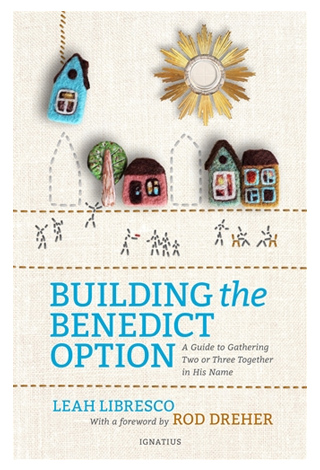 But Leah Libresco would rather get down to brass tacks.

Well, actually, she wants to get down to skillet cookies.

She debuted her new book, Building the Benedict Option (Ignatius Press) – a practical guide for building Christian community based on the ideas formed by Dreher – by taping her phone to the wall of her apartment kitchen and whipping up dessert on her stovetop while answering questions via Facebook live.

Among the first of those questions was – why a skillet cookie?

It was something easy Libresco served during one such community-building event that she hosted herself, when she invited several job-hunting friends over for a resume and cover letter writing event, which opened and closed with prayer and included, yes, the eating of a skillet cookie.

“It’s a cookie the size of a skillet, so I don’t know how much justification it really needs,” Libresco told her audience, “but the actual reason for a skillet cookie is what I want people to do when they’re reading my book is I want them to put down the book. I don’t want you to finish it the first time you read it, I want you to put down the book and invite people over to your house.”

The skillet cookie requires minimal prep work and effort on the part of the host, making community-building seem more achievable and taking the pressure off of being Pinterest-perfect, Libresco said.

In his book, The Benedict Option, Dreher notes that the title was inspired by the last paragraph of philosopher Alasdair MacIntyre’s book, After Virtue, in which he wrote about waiting “for another – doubtless very different – St. Benedict” that would save moral society. This new Benedict would help construct “local forms of community within which civility and the intellectual and moral life can be sustained through the new dark ages.”

Critics of the book and the idea have worried the Benedict Option encourages a sort of “head for the hills” mentality among Christians, who see the failings of the present world as irredeemable and therefore flee to the hills surrounding monasteries to prop up what Christian culture they can, leaving the rest of society to rot.

But as Libresco understands it, what the Benedict Option really means is building what she calls “thick communities” of Christians and friends in any place and circumstance, who can love and pray for each other and can “abbot” each other, in the way that monks are held accountable by their abbots simply because they live with them and are always running into them.

“That’s really my reason for the book,” Libresco told CNA. “There’s a lot of fruitful discussion happening about community but my focus is narrower – it’s not about what you can do when you successfully all manage to move to one neighborhood, or when you set up a school or something like that – it’s wherever you are for the next two weeks or two months, what can you do in that time frame to pray and be with others.”

It’s about creating opportunities in your life to interact with your faith community more, so that you can love them and pray for them better, she said. It’s about inviting people over and feeding them and praying together even if you think your apartment is too small or your kitchen too messy or your schedule too busy.

“One way Ross Douthat described the Benedict Option is that it’s kind of like a ratchet effect of going one step beyond whatever you’re doing now, and I like that description,” Libresco said. While she would see her Christian friends for coffee after Mass, “we might talk about the sermon, but there we were, friends not praying with each other.”

“So for me some of that ratchet effect is just when I’m with a Christian friend, I ask if there’s anything if I can pray for them for, or ask if they could pray for me, or ask if they’d like to pray together. It’s just like one small notch more in being generous and vulnerable with each other than you’re doing by default,” she said.

“The book is meant to be very detailed,” Libresco said. “For people who think, ‘I just don’t know if it’s possible for me,’ I hope they’ll look at the chapters that are kind of explicitly labeled as a cheat sheet. I think there’s something there that you can adapt no matter what your circumstances are.”

Asked how the people of Central Park reacted to the unusual procession, Libresco laughed: “I live in New York City, I am never ever the weirdest thing that anyone sees.”

When planning Benedict Option events, Libresco said she just makes sure she is up front with her friends about what will be occurring at the event, such as prayer or a Marian procession, so that no one is surprised and those who are uncomfortable can opt out of any activities in which they would not like to participate.

“I think it makes sense to not limit [these events] to only one category, that you make some broader for all of your friends and you can have some that are more specific,” Libresco said. “We have board game nights, and not all my friends want to come play board games, and that’s fine, and I don’t think that means that I exclude or dislike those friends.”

One of the biggest things Libresco has learned in event-planning is to make events specific. It makes them special, and less skippable, if you’re having dinner for the feast of St. Dominic, rather than having dinner on a Wednesday night, she said.

“It makes it rare so that people aren’t just like, ‘Well I could do dinner, I could not, it’s ultimately replaceable.’ No it’s not, it’s a feast, it’s once a year. If you’re free, come, if not, you’re waiting until next year,” she said.

The biggest mistake one could make reading Libresco’s book is to think of it as a dogmatic, ultimate answer to the problem of community, she said.

“The goal was not to hand you a best event or best practices completely in a box and you just implement it at people,” she said. “The question is how do you leave room for your friends to meet their needs, to leave room for the Holy Spirit, and I think that’s the main thing, there are many ways to love our friends,” she noted.

“The more programmatic it feels… the more any of it feels like it is dogmatism about exactly how to throw a dinner party, the more you’ve gone round the twist a little bit.”

Her hope, Libresco said, is that she provides some concrete and practical tips and encouragement for her readers, who then put down their books and invite people over.

“Set yourself a three-week deadline, and do something with someone, take some small chance that you wouldn’t have otherwise taken during that period of time,” she said.

“And that could be a larger thing like inviting people over to watch ‘Of Gods and Men’, about martyred vowed religious, or maybe it’s that you who feel nervous about being Christian in public and so you pray the rosary [in public]. Do one more thing, take that ratchet step, be generous with your faith and leave room for the Holy Spirit to prompt  you to give what other people need in those three weeks after you start reading the book.”

Should I stay or should I go?

In the 1981 hit song by The Clash, “Should I Stay Or Should I Go?”, the singer weighs the pros and cons of remaining in a turbulent romantic relationship. He recognizes that both scenarios will […]

Cardinal Pell: I wasn’t sure “justice and respect for evidence would prevail”

A remarkable drama played out on the world stage, via the Australian justice system, in 2019 and 2020, as Cardinal George Pell fought accusations of historical sexual abuse—described by Fr. Joseph Fessio, S.J., as “totally […]

“Someone who seeks the truth finds God”

(Vienna, kath.net, March 2021) The original German edition of the unusual book, How I Became a Man: A Life with Communists, Atheists, and Other Nice People, was published in 2020. The first edition was sold […]