He’s written a book on the subject, and he speaks to audiences often about his experience as a Catholic striving to follow the Church’s teaching about chastity. In a recent interview with CNA, Mattson offered some lessons the Church can learn about engagement with the LGBT community. 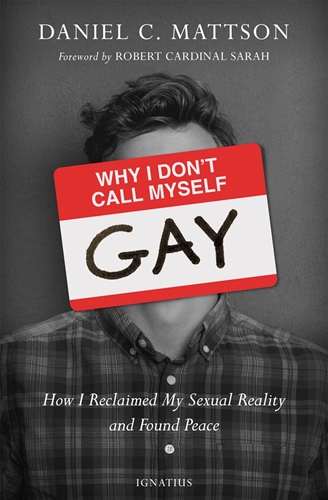 The first of these, he told CNA May 23, is having “the confidence that what the Church has is truly good news for the LGBT community.”

“That is what is lacking, and I just wish that we would not be afraid of it,” he said, encouraging Catholics to be open in talking about Church teaching.

The goal is not to proselytize, he said but to explain the truth and beauty of Church teaching on the issue – “not what you think it is, but what it really is,” he said.

Mattson mentioned the Gospel scene when in Jesus stops the execution by stoning of a woman caught in adultery.

“We cannot be more compassionate than Jesus,” he said, explaining that he often identifies with the woman in the story, who, though broken, meets Jesus and is invited to something more for her life.

The Church, Mattson said, must have “that welcoming message of Christ that says ‘I do not have any condemnation for you, but go and sin no more.’” And part of sinning no more, he said, is an invitation “to a richer life.”

“I want to get the Church excited to talk about this,” Mattson said.

Mattson is the author of the 2017 book “Why I Don’t Call Myself Gay,” which describes his experience with same-sex attraction and his decision to live according to Catholic moral teaching.

Visiting Rome for the launch of the Italian-language version of his book, Mattson gave a speech May 23 at the Pontifical University of the Holy Cross, during which he offered his testimony, sharing that he was raised in a Christian family, his experiences being bullied as a child, and the experience of sexual confusion during his childhood and teenage years.

He also spoke about an addiction to pornography and an anger towards God over his same-sex feelings, prompting him to leave his faith later in life, and live out his same-sex desires in partnerships. Mattson said doing so only made him feel unhappy and lonely, and said it wasn’t until he turned to the Church that he found true fulfillment, by living out her teachings.

In his comments to CNA after, Mattson said personal witness is the key to reaching out to people experiencing same-sex attraction.

“We’re just sitting over here quietly abiding by every word of the Catholic Church and finding it to be the recipe for happiness, and we don’t get much attention,” Mattson said.

The people who have tried living the LGBT lifestyle and “found it empty,” he said, “want to share what we found with the LGBT community and invite them into the full community of the family of God.”

Mattson said that while he has been called “crazy” or “internally homophobic” for speaking out, “I just have to laugh that off.”

Mattson said those who describe Catholicism as “homophobic” usually imply that the Church is somehow a “hateful place” with no room for people with same-sex attraction.

However, “the opposite is exactly the case for me. I have never felt more welcomed in my life than in the arms of Holy Mother Church.”

“It’s the most welcoming place,” he said, “and it’s sad if people want to use the language of the world to say that, to use that word and say that the Church doesn’t have a place or that it isn’t welcoming. For me, it’s been the exact opposite.”

When asked by a priest in the audience how pastors ought to react to people who come to them and confide having same-sex attraction and feelings, Mattson stressed the importance of creating “an environment that is safe,” since many of these people already carry many wounds.

The fact that a person feels they can open up to begin with is a positive sign, he said, explaining that most people with same-sex attraction are afraid that “they will be treated with disgust” if they open up about it, so knowing they have a safe space to talk is key.

Mattson also mentioned Pope Francis, telling CNA Pope Francis has been clear about the Church’s teaching, and explaining his belief that Francis’ message is often manipulated by the media “to serve their own agenda.”

Mattson said he always remembers the pope’s comments on his flight back from Rio de Janeiro in 2013 when he said that he is “a son of the Church.”

“He’s said he’s a son of the Church and I’m confident in that,” Mattson said, and voiced his hope that one day he would be able to meet the pope and tell him “how the Church has been a mother to me and has guided me to happiness and freedom.”

Mattson also expressed support for the view that sexuality doesn’t define a person’s life, and stressed that using labels such as “gay” or “straight” reduce a person to their sexuality, since in the end everyone is ultimately a child of God.

“The truth is that my sexual identity is (that of) a man, just like Adam, just like Abraham, David, just like every other man that has walked the face of the earth, I’m not a different sort of sexual person than they were,” he told journalists.

“The Church’s teaching is that you are identified as a beloved son of God, that has been the experience for me.”