There have been many films about exorcism: some groundbreaking: The Exorcist (1973); some distinctly orthodox: The Exorcism of Emily Rose (2005). Most have been sensational; some have been risible.

By contrast, surprisingly, there have been few documentaries on the subject. Recently released on the festival circuit, and on limited theatrical release, Deliver Us (Libera Nos) is an Italian-French film about exorcism and exorcists by Italian director Federica Di Giacomo. 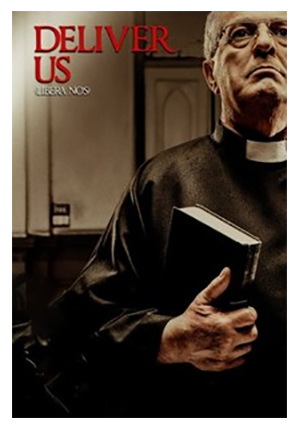 Deliver Us follows the day-to-day ministry of Sicilian exorcist Father Cataldo Migliazzo. This priest was made for cinema. Think an elderly Anthony Quinn. He acts, as subjects of documentaries should, without any regard whatsoever as to whether the camera is rolling or not. His comments are off the cuff; his actions unrehearsed; his interactions with others unscripted; above all, then, he is real. The fact that he is operating in what will appear to many as an unreal world of evil spirits, and deliverance from them, seems to make little difference to him. He continues on screen as if the cameras are not present—as if he is involved in something perfectly normal, even mundane.

Of course, exorcism is a part of the Church’s mission and ministry. The fact that it has been largely hidden for centuries, before being shamefully exploited and mythologized by Hollywood, has only obscured the ministry in the minds of the faithful. To see it, therefore, in ‘real time’, so to speak, on the big screen is not just riveting but unexpectedly revelatory.

Throughout Deliver Us the tone is a correct one: sober, measured, open. The filmmakers capture the film’s subjects—both exorcists and those seeking deliverance—in a way that is wholly appropriate. The film simply and faithfully records what is taking place. It allows Fr. Migliazzo to explain matters as he sees them. It allows those who have come seeking his help to speak for themselves also. In some cases this is a painful exposition of how squalid their lives have become, and how desperate they are in seeking help. Their turning to the local exorcist is clearly a last resort, something the filmmakers allow us to see in presenting the backstory of their lives on screen. By the same token, the film allows the exorcist to perform the rite and ritual without any overt editorial intervention. Watching the proceedings, one gets a clear sense of what exorcism entails, both in its human and supernatural aspects.

Refreshingly, Deliver Us avoids the possible clichés. There is no crashing of thunder; there is no heightening by music—in fact, there is hardly any music throughout most of the film. The victims of alleged possession are not all young, female, and beautiful. Their common attribute is a look that could only be described as disturbed. This impression is reinforced as we witness their conversations with others. Those deemed to be suffering demonic oppression have one other visible characteristic, one that can only be described as a desperately sad demeanor. In addition, we also see from those claiming to be possessed flashes of uncontrollable rage, freakish bodily writhing, accompanied by much eye rolling. There is one sequence in which a woman who, until then had acted normally, changing into something contorted through a seeming inner anger, fueled by a force that appeared not to be of this world. This is not a documentary for the faint-hearted.

The makers of Deliver Us are to be commended. For a start, the film appears free from any bias. The filmmakers do not try to interpret what is happening—either theologically, socially, politically or even culturally. They simply point the camera and let the story tell itself. That said, the story is as much about what has happened off screen as what we see taking place on it. Take, for example, the young woman who is brought to the exorcist by her worried parents. Of all presented in the documentary, she adheres most closely to the Hollywood stereotype. She is young and attractive, with a loving and supportive family. Even so, she is given to strange behaviors. There is clearly something not right. At one point the camera catches her extraordinary reaction to being in the presence of a praying congregation. Her eyes roll back and her body contorts in a way reminiscent of possession as shown in any number of feature films. Yet this is real life. Her story is the more remarkable as, eventually, an exorcism does take place. There is an outcome recorded by the film; at least there appears to be one. In her case, and in contrast with most of those featured, there is an ambiguity about what is taking place. Is what we are seeing in her sufferings a mental illness, or something else? Inevitably, there is always going to be an element of ambiguity as to what is seen on any movie screen. By the end of film, however, there are more questions than there are answers.

Fr. Migliazzo appears the opposite of those seeking his help. What is presented here is a man of granite faith. In the realm of his ministry, he has seen it all before. He knows what, or more correctly who, lies behind much of what is presented to him. He knows too what is required to help those who seek him out. In so doing, he has no hesitation in calling the enemy by its name and then sounding a very different Name, and, by so doing, releasing souls from the pains they suffer. Throughout, he is calm; he is measured; he is determined—but, above all, he is indefatigable.

Since its release, Deliver Us has picked up awards along the way, even though it has been released only piecemeal around the globe. Some of the reviews, however, have been less than kind. Critics have no objection to the cinematography or the movie’s look and feel. What they object to is its basic premise. One reviewer called it a lot of ‘mumbo-jumbo’ with people who didn’t need exorcism so much as ‘therapy and meds’. Obviously, this critic was not reviewing a film so much as revealing a mindset—his own. Any fair-minded individual who watches Deliver Us will come away chastened. There are times on screen, however, when even a person of faith will see things and be left wondering if what is being witnessed is really taking place. The film surprises as much as it confirms even when its subjects are viewed through a traditional Catholic lens.

The final scenes of Deliver Us are perhaps the most telling. We encounter Fr. Migliazzo at a conference for exorcists in Rome. The other exorcists present and featured by the filmmakers are younger, more inexperienced priests. Over lunch they talk in wonder at some of the things they have heard about in this ministry. In contrast, we see Fr. Migliazzo bless himself before dining alone, seemingly preoccupied in thought. Later, he exits the noise of the cafeteria, retiring outside to pray. As he does so, the camera catches him pause for a long time in front of a statue of Our Lady. Then he kisses his Rosary and walks off reciting that prayer. In a few moments on screen we glimpse the power behind Fr. Migliazzo’s ministry as well as his motivation and, indeed, the basis for his effectiveness.

MPAA Rating: R USCCB Rating: O Reel Rating, 3 out of 5 reels (Disclaimer: Major spoilers ahead.) It is rather rare that a movie is promoted for its director rather than its stars—especially when the […]

One of the most refreshing things to come out of Hollywood in recent times is Tom Cruise’s “thank you” message before the start of this summer’s biggest blockbuster, Top Gun: Maverick, a film mercifully free […]