Some years ago, Peter Hitchens asked whether there is “any point in public debate in a society where hardly anyone has been taught how to think, while millions have been taught what to think?” The question lingers, especially in the debate surrounding Islam’s fourteen-hundred-year existence. While it is necessary that we think about Islam, it is imperative that we think about what we’re taught about Islam. The more one studies Islamic texts (the Koran, Hadith, Sira, Reliance of the Traveller), the less one is likely to believe what one is taught about Islam by Pope Francis, the United States Conference of Catholic Bishops, or the steady flow of flabby coverage by major news outlets. It is no surprise most people wander around repeating “Islam is a religion of peace” or tune out altogether. As Catholics, we do either at our peril. 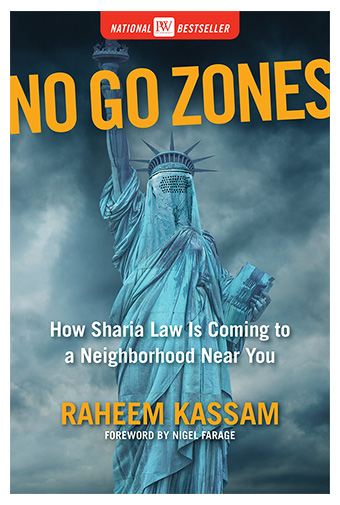 Raheem Kassam, editor-in-chief of Breitbart London, has written an interesting book that goes to the heart of the debate about Islam. He seeks to answer questions many of us in the West, especially in the United States, have about Muslim No Go Zones. Do they exist? Where are they? Can outsiders go there? Readers may be surprised by the answers.

No Go Zone is a controversial label first used by Middle East commentator Daniel Pipes to describe areas in Europe plagued by poverty and crime and where Sharia law is the de facto, if not de jure, legal code governing social interaction. Pipes later revised his comments but the name and the controversy persisted. Unfortunately, most media coverage lacks a nuanced understanding of Muslim-dominated areas in Europe and the U.S. and so people are often given a choice of extremes: No Go Zones are either a myth or a monstrous reality. As a point of clarity, Kassam uses a working definition of No Go Zones to help the reader:

An area in which the likelihood of being attacked, accosted, or otherwise abused on the basis of your appearance, or the bigotry of locals, is higher on average than elsewhere in the city or country in question. A ‘No Go Zone’ may refer to an area in which police require authorization or acceptance from a religious figure or community leader before entering, or indeed where the rule of law has broken down or been supplanted by a foreign set of rules.

Kassam strikes a balance early in the book. “Separating emotion from this debate is difficult, especially for someone like me, born and raised in a Muslim family, who still has many practicing Muslim friends and family members.” He is interested in the truth and concerned with what effect, if any, No Go Zones have in our communities. To these ends, he said, “data was the key to writing this book.” He did his research both statistically and in the field. He avoids hyperbole—notwithstanding the provocative cover and title of his book—and goes right to the data.

In the UK, for example, eighteen percent of young Muslims would not report a planned terrorist attack and a full forty percent of British Muslims say they want Sharia law in the West. In the U.S., one poll revealed that fifty-one percent of Muslim respondents want the choice to be governed by Sharia and of those, a quarter believe that there ought to be violent penalties for those who insult Muhammad. According to Pew Research, there are 3.3 million Muslims in the United States. And, according to Pew-Templeton, there are 3.5 Muslims in Britain. The results of these polls, accounted for in real numbers, are as staggering as they are disturbing.

But Kassam isn’t satisfied with mere numbers. The bulk of the book, indeed its structure, is built around his visits to various enclaves with reputations, deserved or not, of being No Go Zones. And his qualitative observations are not binary. Rather, what emerges is a spectrum, a useful and more nuanced approach to understanding these areas. Kassam argues that enclaves such as Molenbeek, Belgium, and Tower Hamlets in London are each “at a unique milestone on the journey to ghettoization and Islamification. The differences between the stages of their decline are partially due to the type of Islam that is popular with their respective residents” and “where their inhabitants immigrated from makes all the difference.” Kassam describes his visit to Belgium in 2015 thus:

On a visit to Molenbeek in 2015, just days after the Paris massacres, our group was jeered at and heckled and the women were told to cover their heads. Unmistakable tension rode high. The suspicion of the locals manifested itself in hateful, jingoistic, and barbarous ways. This wasn’t Europe. This wasn’t Brussels. This was what they call Little Marrakech. Where you must act accordingly, or leave.

This is not the sort of thing you read in The New York Times. Of course, it does not mean, nor does Kassam say, that his experience is universal or that these areas remain uncomfortably or dangerously static. All communities are dynamic. But he points to various continuities of concern common to these areas in Europe and the United States that demonstrate a lack of integration and assimilation. More significantly, or ominously, Islamification is rooted in, and evidenced by, compliance with Sharia law. And so the ubiquity of halal butchers, women wearing hijab, and sharia compliant financial institutions, demonstrates the emergence of a parallel society increasingly and authoritatively subject to religious law. A law that which ultimately disallows coexistence with, or subservience to, secular legal codes. As Andrew McCarthy said, “when we speak of Islam, as opposed to Muslims, we are not speaking about a mere religious belief system. We are talking about a competing civilization — that is very much how Islam self-identifies. It has its own history, principles, values, mores, and legal system. Islam, thus understood, is not non-Western. It is anti-Western.”

A sinister manifestation of Sharia is implicit in the stifling of free speech in Western countries. Specifically, the routine accusation of Islamophobia hurled at anyone who criticizes, or even inquires, into Islam. It stems, Kassem says, “from what is basically a blasphemy law,” giving rise to an intellectual dimension of No Go Zones. They “are not just physical localities in the suburbs of major…cities. They’re also a mindset.” The consequences for blasphemy in Islam are severe, as the victims of the Charlie Hebdo massacre tragically learned. But the use of Islamophobia as a cudgel to beat the rest of society into compliance takes on less fatal yet still disturbing guises.

Hamtramck, Michigan, a city Kassem visited, is a recent example. Originally settled by Germans, later dominated by Poles, and now home to immigrants largely from Bangladesh and Yemen, it is also the home of the nation’s first Muslim-majority city council. Councilman Ian Perrotta, in attempting to address the city’s trash problem, pointed out that Bangladeshi and Yemeni immigrants were responsible for much of the problem, owing to a lack of cultural familiarity with American sanitation. A Muslim council member took offense, accusing Perrotta of bigotry and Islamophobia and made a motion to censure Perrotta. The Hamas-linked Council on American-Islamic Relations (CAIR) pounced on Perrotta, CAIR-MI Executive Director Dawud Walid saying, “We support the censure of Council Member Perrotta for his scapegoating of Yemeni and Bangladeshi immigrants. In the Trump era, racist and Islamophobic statements from government officials are becoming all too common. It is important for their peers to clearly rebuke such bigoted rhetoric.”

This is part of a wider problem surrounding free speech in the West. But it is also a problem with specific consequences for the West’s relationship with Islam. And one that shows no signs of abating. For if questions or criticism regarding Islam give rise to accusations of Islamophobia and bigotry, then intellectually we all live in a No Go Zone.

Kassam lauds diversity in the towns he visits and, in the case of Hamtramck, has particularly high praise for the excellent restaurants and food choices. He speaks to residents both paranoid and welcoming. He asks them questions and allows them to reveal what kind of place they live in. The book is informative, though digressive, wandering freely amongst people, places, and politics. This is perhaps the book’s weakness and its strength. For even though it ambles and strays, it does so in areas most of us are unlikely to go and mainstream media avoid.

Kassam will undoubtedly be denied a fair hearing—or any hearing—in most media outlets because he is employed by Breitbart and published the book with Regnery, a quality conservative publisher. But this is precisely what is wrong with our politics and our culture. It is, in a way, what Peter Hitchens was driving at. Those who know how to think will examine the argument, those who are told what to think will applaud or attack the arguer. It is the arguments and observations in Kassam’s book that deserve our attention.

No Go Zones: How Sharia Law Is Coming to a Neighborhood Near You
by Raheem Kassam
Regnery Publishing, 2017
Hardcover, 256 pages

Defending the voiceless, from the unborn to persecuted Christians

Anglican Bishop Michael Nazir-Ali is using his unique perspective on the plight of Middle Eastern Christians to be “light to attract those in darkness.” […]