Daniel Burston’s new biography, A Forgotten Freudian: The Passion of Karl Stern, is, among other things, a fascinating lesson in how people can be “disappeared” (to use the argot of many totalitarian regimes) when the prevailing political winds shift. Stern’s life seems to have run on a track parallel to, but going in the opposite direction of, major movements in the twentieth century. He was a practicing Jew in Germany whose neurological and psychiatric career was beginning just as the Nazis came to power, forcing him to flee first to England and then to Canada. He was heavily influenced by Freudian psychoanalytic thought just as North American psychiatry was entering its psychopharmacological phase and beginning to leave Freud behind. He was a Jew who entered the Catholic Church not long before the Church was increasingly distancing itself from the idea that Jews needed to be converted. And he lived out his Catholicism largely in Montreal as Quebec was quickly abandoning her ancestral faith—though not as quickly abandoning her rampant anti-Semitism. 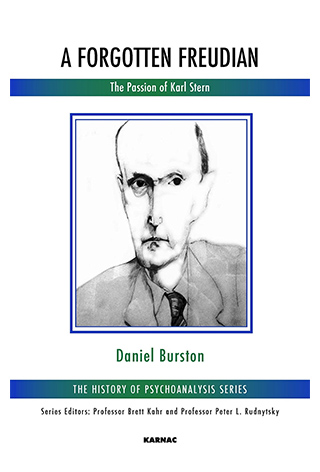 Given all these factors—and more—it is not hard to see how apt Burston’s full title is, for Stern was not just forgotten by nearly everybody: he also suffered misunderstanding and ostracization from the Jewish and psychiatric  communities as well, and suffered in other ways, too, especially after the suicide of his firstborn son in 1967.

In his day, however, Stern seemed not to suffer but to sail along serenely as an international celebrity and best-selling author, a widely sought speaker on the Catholic lecture circuit after the publication in 1951 of his moving memoir The Pillar of Fire. That book, which some said was a worthy successor to Thomas Merton’s The Seven Storey Mountain, detailed Stern’s conversion from Judaism to Catholicism and attracted vast attention from many Catholics, including especially Dorothy Day, Graham Greene, Jacques Maritain, and Gabriel Marcel. Additionally, Stern was influenced by still other Catholics, including Josef Pieper, and by Russian Orthodox artists and thinkers includingTolstoy and Vladimir Soloviev.

Burston, a professor of psychology at Duquesne University in Pittsburgh where the Stern papers are housed, has done archival work in this biography and quotes extensively from Stern’s correspondence with Day, Greene, and others. Burston reveals that it is with Day in particular that Stern shows the greatest similarities and shares the deepest communion in their joint understanding of Catholic life mid-century. Both realized (Day more than Stern, I would suggest) the radical demands of the gospel when it comes to questions of poverty and peace, and both were bewildered by the increasingly bourgeois captivity of Catholicism in North America, which blunted its ability to challenge structural injustices and poverty as well as the arms race of the Cold War.

Stern’s later books, which did not sell as well as The Pillar of Fire, revealed him to be one of the most astute mid-century commentators trying to show that Freud and the Church, psychoanalysis and theology, need not be enemies, but have much in common, not least their hope for human healing and their commitment to finding that truth by which alone we are free. Stern was wonderfully candid in seeing the good in Freud as a humanist while sharply separating his clinical achievements from his philosophy, which Stern dismissed as “amateurish and contradictory,” and his atheism, which he regarded as a “tragic historical accident.” In 2017, on the centenary of the publication of Freud’s most widely read and translated work, Introductory Lectures on Psycho-Analysis, and on the 90th anniversary of his most controversial work (especially for Christians), The Future of an Illusion, Stern has much wisdom to supply Catholics who continue to  grapple with the question of the relationship between psychoanalysis and theology.

Burston brings all this and more to our attention in a fascinating biography of a life lived at the intersection of many contentious movements and personages of the last century. Stern’s one life, lived on two continents and in three countries, united at least four major strands, albeit uneasily: being Jewish, German, a Freudian, and a Catholic—in Canada.  The Jewish community, which was quite large in Montreal when Stern moved there in June 1939 and was baptized in a Franciscan church there in December 1943,  largely shunned him; Freudians and other psychiatrists were bewildered by  Stern’s Catholicism, not a few hinting that even psychiatrists who convert to Catholicism must not be quite right in the head; and a goodly number of Catholics (following Archbishop Fulton Sheen’s tendentious distortions) thought Freud was one of the two great ideological enemies of the century—the other being, of course, Marx.

And today? If Stern was quickly forgotten after his death in 1975, why ought we to recall him now? Has not Quebec become even more estranged secularized? Is not Freud even more discredited today? And are not Jewish converts to Catholicism still rather an embarrassment to Catholics and Jews alike today?

Burston does not answer these questions directly. Instead he seems to suggest that Stern’s life remains relevant for what it reveals about how Jews and Catholics should, and should not, view and relate to one another in both official dialogues and unofficial relations. Perhaps above all Stern remains relevant and indeed important insofar as he continues to remind Christians that their Savior and His mother were and are Jews.

These issues are treated in Burston’s penultimate chapter, “A Hebrew Catholic,” which looks first at how Stern understood his conversion, and then surveys more broadly Jewish and Christian understandings of conversion, especially as Catholic notions of the same shifted after Vatican II. This is a very impressive chapter for the great restraint Burston brings to it, and the care with which he describes complex and easily politicized issues. Commendably, he resists the urge to put Stern’s conversion on the couch and reduce it to some neurosis or other, though Burston does not gloss over psychological issues in Stern’s life either.

If chapter 8 also contains some of the strongest insights in the book, it nonetheless suffers somewhat from trying to do too much too quickly, and from being rather weakly sourced when it comes to questions of Catholic understandings of supersessionism, and the role of the papacy in dealing with anti-Semitism. (To be fair, Burston makes it clear in the book’s preface that he is not trained in theological matters.) A number of important magisterial documents and scholarly works are overlooked or only mentioned in passing, and there is an indecently hasty attempt to glue together Mel Gibson, the SSPX, and certain decisions of Joseph Ratzinger/Pope Benedict XVI to suggest that  anti-Semitism was on the rise in the Church during his papacy. (A few other, more minor flaws mar this otherwise fascinating book, including several references in the text to books that are not in the bibliography; some errors regarding dates [pp. 19, 67, 70]; and a few typos [pp.81, 215].)

In the end, Burston suggests that there are at least three reasons that help us understand more deeply why Stern became Catholic: his zeal for a life of moral clarity and teleologically ordered purpose; his love of sacred music—Bach’s St. Matthew’s Passion, Beethoven’s Missa Solemnis, and other works which Stern himself played with great love and widely respected skill—with some joking that he was a musician whose hobby was psychiatry; and his understanding of theology proper, including Christology. Beyond these three, however, Burston recognizes that neither he nor the rest of us can intrude, leaving each of us to figure out whether that pillar of fire really is supernaturally bidding us to follow, or a naturally occurring phenomenon of no real significance. As a Jewish fisherman was asked by his Jewish friend  Jesus 2000 years ago: who do you say that I am?

A Forgotten Freudian: The Passion of Karl Stern
by Daniel Burston
The History of Psychoanalysis Series; Karnac Books, 2016
Paperback, 280 pages

I confess: I’ve already seen Father Stu, the much anticipated film scheduled for release this week from Sony Pictures. I’ve seen it twice, in fact – and I loved it! So when I was invited […]

A unique credo and affirmation of faith by a distinctive mind

From the rise of the “nones” to the eschewing of Christianity for Eastern spiritual practices such as yoga, the American religious landscape has been changing for decades. Clearly, the watershed moment was the countercultural 1960s. […]

A renowned Italian rabbi, Giuseppe Laras, recently wrote an open letter in response to developments within the Italian Biblical Association which he considers extremely problematic in terms of Jewish-Christian relations. In fact, he says that he is […]