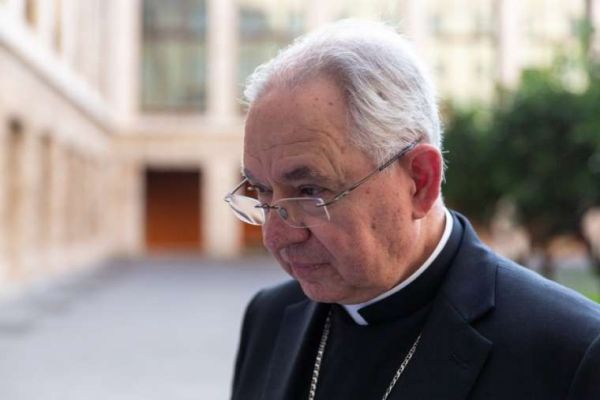 Archbishop Jose Gomez has rebuked an online claim that he plans to vote for Joe Biden in the November presidential election, stating that an alleged conversation in which he disclosed his voting plans never actually took place.

“In all my years as a priest and a bishop, I have never publicly or privately endorsed a political candidate or told anyone who I might be voting for. It is disgraceful that some would use the media to spread misinformation and try to confuse and divide people,” Gomez, the president of the U.S. bishops’ conference, said in an Oct. 20 statement.

Cleanthechurch.com, a website based in California, published a blog post Tuesday evening which alleged that in February 2020, Gomez and a “wealthy ex-donor to the church” met over breakfast at the Jonathan Club in downtown Los Angeles.

The blog post claimed that Gomez told the individual that he is “voting [for] and supporting Jose [sic] Biden because he did not ‘like the way Trump talks.’”

“[T]he president of the United States Conference of Catholic Bishops is voting for a pro-abortion, pro-gay-marriage, socialist because he “does not like the way Trump talks”…. I am sure that he is also forcing priests in the archdiocese to support Biden… So infuriating!” the blog reads.

Gomez denied the alleged conversation, and even the breakfast, ever took place.

A spokeswoman for the archdiocese told CNA on Wednesday that the archbishop had no breakfast meetings on his calendar during the month of February.

In his statement, Gomez urged Catholics to pray and reflect on the U.S. bishops’ voting guide, “Forming Consciences for Faithful Citizenship: A Call to Political Responsibility.”

Since 2007, the bishops of the United States have issued the “Faithful Citizenship” document to help Catholics decide how to cast their vote; it was most recently updated in 2019.

“And let us pray for the grace to treat one another as brothers and sisters, with dignity and respect,” Gomez concluded.

The “ex-donor” who made the claim against Gomez plans to release an affidavit doubling down on his claims, based on an alleged audio recording of the conversation, according to John Paul Norris, one of the founders of Cleanthechurch.com.

According to Norris, the accuser, who has declined to be named publicly, had— before the alleged February conversation— been meeting with Gomez at least once a year, and was a significant donor to the archdiocese.

“Everyone in the diocese knows him very well,” Norris told CNA.

Norris told CNA the accuser has an audio recording of the alleged conversation with Gomez stored on his cell phone, but has no plans to release it to the public. He said the recording includes Gomez stating that if Biden earns the Democratic nomination for president, Gomez would vote for him “because he’s Catholic.”

In 2019, Norris was removed from the Los Angeles cathedral after confronting Gomez about Cardinal Roger Mahony and the McCarrick scandal.

Norris’ blog post this week was appended to a petition on Change.org, which Clean the Church created in 2018, calling for criminal prosecution of Mahony, who led the Los Angeles archdiocese from 1985 to 2011. Mahony has faced scrutiny for his handling of the sexual abuse crisis during his tenure as archbishop of Los Angeles, and been accused of covering up serial acts of abuse.

The petition calls on all of Los Angeles’ bishops to “act now or resign from their posts.”

Despite a history of public anti-Catholic bias on Harris’ part, Norris said he believes Gomez favors the Biden/Harris ticket because Harris appeared unwilling to prosecute Cardinal Mahony when she was district attorney in LA.

“She may be anti-Catholic faith, but she’s certainly a defender of the prelates, of the clergy,” he contended.

Norris offered no evidence of a “deal” regarding Mahony, and admitted that allegations of one are likely to remain unproven.

Joe Biden, a Catholic, has in recent months doubled down on his support for legal abortion.

This month, Biden repeated his pledge to codify a right to abortion into federal law should the Supreme Court overturn the 1973 Roe v. Wade decision.

Norris said his group believes that Gomez is not strong enough in his public pro-life statements.

The archbishop has, however, written frequently in recent years about the “preeminent” importance of ending legal protection for abortion.

“Among the evils and injustices in American life in 2016, abortion and euthanasia are different and stand apart. Each is a direct, personal attack on innocent and vulnerable human life,” Gomez wrote in the foreword for a book on Catholics’ responsibilities in the public square.

“Abortion and euthanasia are ‘fundamental’ social issues because if the child in the womb has no right to be born, if the sick and the old have no right to be taken care of, then there is no solid foundation to defend anyone’s human rights, and no foundation for peace and justice in society.”

Earlier in 2020, the USCCB issued a letter, approved by the bishops, re-presenting the “Faithful Citizenship” document along with a series of short videos. In that letter, the bishops, led by Gomez, identified abortion as the “preeminent priority” for Catholic voters “because it directly attacks life itself.”