Summer is in the air, though here in Britain, in July, this mostly means that the rain is slightly warmer than usual. However, after a turbulent and distressing couple of months for the country, the summer at least promises some time to relax with a good book or two. Enter The Writers, the perfect distraction for authors and bookworms alike. Robert Wernick’s book is a collection of short biographies of a group of colorful and entertaining writers, from Ezra Pound to Herman Melville. A couple of them—Sir Arthur Conan Doyle and Agatha Christie—may be of particular interest to Catholic readers. 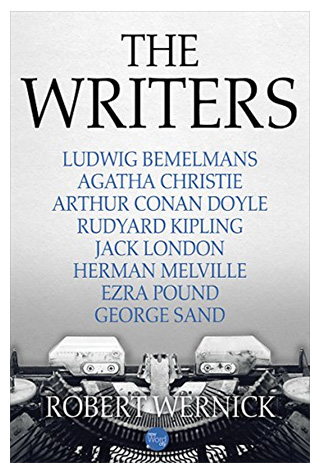 The book explores the lives of eight writers in total:Ludwig Bemelmans, Christie, Doyle, Rudyard Kipling, Jack London, Melville, Pound and George Sand. Some of these eight are enduringly popular, others who have slipped into relative obscurity. Wernick looks at the details (and sometimes the eccentricities) of their lives, the societies and eras in which they lived, and the literary and cultural legacies they left behind. His style is highly engaging and the different narratives romp along at a lively pace.

Wernick’s observations of these intriguing lives are often witty and occasionally hilariously funny. I found myself bursting out laughing on a train, reading a quotation of T.S. Eliot’s about Ezra Pound, in which he describes his manner of speaking as giving the impression “of a man trying to tell a very deaf person that the house is on fire.”  Other moments are more distressing, such as the depiction of Rudyard Kipling’s anguished old age, battling to come to terms with the loss of his only son during the First World War. Then, there are moments about which most authors can only dream: “Melville woke one morning to discover he was famous.” Now, wouldn’t that be nice?

The difficulty with the book is that it lacks any coherent structure or purpose. The individual lives of the writers chosen are fascinating, but it feels too much like a hotchpotch of authors brought together for no obvious reason, belonging to different generations, different nationalities and different genres in some cases. A strong introduction—or any introduction at all—might have clarified why Wernick made the choices he did. Instead, I found myself wondering what on earth the likes of George Sand and Agatha Christie are doing in the same book.

The details of the lives themselves do not break any particularly fresh ground. Is there anyone familiar with Conan Doyle’s work who is not aware of his sad (and costly) obsession with spiritualism? Does anyone need reminding that Agatha Christie wrote detective stories? What makes The Writers worth a read is the charming way in which Wernick brings the stories of these extraordinary men and women together. The Writers made me curious to read his other books to see if a full-length biography gives room for more substance to match Wernick’s infinitely readable style.

I would say that The Writers is the perfect gift, but unfortunately it is published by an e-publisher and is not available as a print edition. I felt somehow that the book would work best if it were attractively printed and accompanied with original photographs and copies of quoted letters. This may seem a point of ludditism in a world of digital media and kindle apps (I would be the first person to raise my hand and admit that I read virtually all my books electronically now) but just sometimes a book is published that is really asking to be physically held and owned. The Writers is one of them.

About Fiorella Nash 37 Articles
Fiorella Nash is a researcher and writer for the London-based Society for the Protection of Unborn Children and has over ten years' experience researching life issues from a feminist perspective. She makes regular appearances at both national and international conferences and has appeared on radio and in print discussing issues such as abortion, gendercide, maternal health and commercial surrogacy. She is the author of The Abolition of Woman: How Radical Feminism Is Betraying Women (Ignatius Press, 2018), and is also an award-winning novelist, having published numerous books and short stories under the nom-de-plume Fiorella De Maria.