“Only someone who has broken out of the restricted horizon of ideology can see clearly what has been left behind. And only those who have fully contemplated the abyss can be sure of having attained the spiritual truth capable of overcoming it.” — David Walsh

To live the faith of Abraham is to be ready at a day’s notice to pack the tents symbolizing everything that is dear to one and to go to a new, unknown place, which God will indicate, completely independently of rational calculations or our emotional predilections. To live the faith of Abraham in the cultural context of postmodernity is to be able calmly to pack up the tents of congenial concepts and arguments, not in order to set out on a desert path, but to set them up again in a different context and in a different form, in a place indicated by God. In an Abrahamic testimony of faith, one may not lose heart on account of the wildness of new places or on account of a feeling of loneliness in a foreign landscape. We must constantly seek the face of the Lord (Psalms 27: 8), listening carefully to His voice, which could be either a discreet whisper or a delicate breeze (1 Kings 19: 12). We need to love God more than the logic of convincing deductions and the collection of respected authorities, to which we like to refer in times of difficulty. We need to accept the provisionality of contingent means, in order that the Divine Absolute might all the more clearly reveal in them his power. Only then does the contemporary “wandering Aramaean” reveal the style in which, amidst the darkness of our doubt, flashes the light of the great adventure of our faith.

I think Zycinski’s words are prophetic, and they pose a serious challenge to the Benedict Option. “We need to accept the provisionality of contingent means, in order that the Divine Absolute might all the more clearly reveal in them his power.” The Benedict Option, on the other hand, seeks permanency in small Christian enclaves. But there is a good chance that these will simply not be available to us, or at least not in the traditional mold described in Rod Dreher’s book. If Zycinski is right about what it means to live the fulness of the Abrahamic Faith today, Catholic traditionalism in general, and the Benedict Option in particular, are simply not adequate “options” for today’s world. 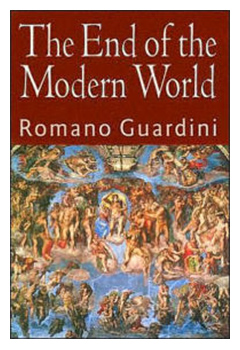 Zycinski’s words in the quote above echo and confirm the prophetic and disconcerting thought of Romano Guardini. In his book, The End of the Modern World, written in 1956, the great Catholic theologian wrote:

…the new age will declare that the secularized facets of Christianity are sentimentalities. This declaration will clear the air. The world to come will be filled with animosity and danger, but it will be a world open and clean. . . . As unbelievers deny Revelation more decisively, as they put their denial into more consistent practice, it will become the more evident what it really means to be a Christian. At the same time, the unbeliever will emerge from the fogs of secularism. He will cease to reap benefit from the values and forces developed by the very Revelation he denies. He must learn to exist honestly without Christ and without the God revealed through Him; he will have to learn to experience what this honesty means. Nietzsche has already warned us that the non-Christian of the modern world had no realization of what it truly meant to be without Christ. The last decades have suggested what life without Christ really is. The last decades were only the beginning.

Guardini described a world in the 1950s like the one Dreher describes now, one of a neo-pagan totalitarianism that no longer tolerates any threats to its secularist, atheistic, and humanist dogmas, one in which Christians and other theists are called to brook no compromise and live out their Faith all the more integrally and heroically. But Guardini’s prescription for action is something at once more bracing and consoling than Dreher’s. Nothing but the “free union of the human person with the Absolute through unconditional freedom will enable the faithful to stand firm—God—centered—even though placeless and unprotected.” Placeless and unprotected.

He goes on: “Loneliness in faith will be terrible. Love will disappear from the face of the public world, but the more precious will be that love that flows from one lonely person to another, involving a courage of the heart born from the immediacy of the love of God as it was made known in Christ. . . . Perhaps love will achieve an intimacy and harmony never known to this day.” In short, Guardini sees no real possibility for safe havens of Christian culture, and even if we could create and live in them, I interpret Guardini to mean that they would tend to stunt our spiritual growth by becoming halls of mirrors insulating us from the love we need to give—indeed be—to the lost ones of the world: “one lonely person to another.”

What Guardini is telling us is both much, much worse and much, much better that Dreher’s depiction of our situation. Worse, in the sense that although the Benedict Option is a crucial strategy for theists, it very well may not be possible. If Guardini is right, our situation is a gift, a priceless treasure, for God will give each of us who ask for it the grace to endure the darkness, barbarism, and loss of our customary sensible and cultural signs of God’s love and presence. And we will emerge from this purgation with our idols and crutches and safety nets broken and as useless as they always were. “We need to accept the provisionality of contingent means, in order that the Divine Absolute might all the more clearly reveal in them his power.” Thus we will be able to know and experience God as He is, to the fullest extent possible in this mortal coil, and be conduits for his inexorable Love which will conquer all and save all.

We can surely try to opt out of the decaying culture and to shore up theistic culture in small enclaves of likeminded devotees of Tradition and the Transcendent, but whatever we do, we must do the one thing most necessary, as Mary did at the feet of Jesus, while Martha was busy with other things she thought more important—Mary knelt and adored Christ. We must all become mystics now, in intimate and real contact with God, so we can be His hands, heart, and voice in our ever darkening world. As the German theologian Karl Rahner once prophesied, “The Christian of the future will be a mystic, or he will not be at all.” Rahner wrote:

Do not despair when experiencing despair: Let the despair take all away from you, since what is taken from you is only the finite, the unimportant, even if it may have been ever so wonderful and great, even if it may be yourself with your ideals, with your smart and detailed plans for your life, with your image of a god that looks more like you than the incomprehensible one.  Allow all the exits to be blocked, for they are only exits into the finite and paths into dead ends.  Do not be frightened by the solitude and forsakenness in your internal prison, which appears to be as dead as a grave.  For if you stand firm, refusing to flee from despair and in the despair over the loss of your former idol that you called God you do not doubt the true God; if you stand firm, which is a true miracle of grace, then you will realize suddenly that your grave-like prison cell is locked up only against what is meaningless and finite, that its deathly emptiness is only the vastness of God’s presence, that silence is filled with a word without words by the one who stands above all names and who is all in all.  The silence is his  silence.  He is saying that he is here. . . . He is here.

This is not lost on some of our youth. I end with a quote from a paper of one of my students at Wyoming Catholic College. She wrote this after studying postmodern philosophy and literature, both godless (Camus, Derrida, and Foucault) and godful (Dostoyevsky, Eliot, and Girard):

Living in the modern era is a gift. Despite the broken traditions, abolished communities, and heap of worn-out philosophies, this era is still a gift.  In one way, man can no longer distract himself with human constructs.  They have all failed, and anyone who lives in denial of this failure will be forced to face tragedy at some point like the grandmother (even if that point only comes at his or her own death.)  In another way, man is called to even more intimate encounter with God as a result of this Wasteland.  Quite literally, we have been placed in a society that purges us of pride and confidence in human accomplishment.  The disparity of the Wasteland calls for deeper love and communion, but God provides a more intimate way of encountering Himself to overshadow this disparity.  And, this is a gift.

Dostoevsky predicted it already. In his classic novel The Brothers Karamazov, there are three main characters that represent the world we are living in today. There is Ivan, who represents the “postmodernist.” Ivan is today’s […]

If, by now, you haven’t heard of Rod Dreher’s The Benedict Option: A Strategy for Christians in a Post-Christian Nation, then you likely are living the Benedict Option-hermit phase. To say that the book has […]