On May 18th, 1864, Confederate forces at the Battle of Spotsylvania repelled the Union army with a devastating hail of fire. The storm of grapeshot, bullets, and artillery left the Union army literally in pieces: Confederate chaplain Fr. James Sheeran C.Ss.R. writes that afterwards one of the soldiers reported having seen, hanging from a tree branch, the grisly remains of a human heart.

It was amidst this unfathomable horror that the Redemptorist Catholic priest, Father James Sheeran, ministered to the Confederate army during the American Civil War. Over the course of the war, Fr. Sheeran saw action in virtually all the worst battles: Second Bull Run, Antietam, Chancellorsville, Gettysburg, the Wilderness, and countless others. Now published for the first time in its entirety, his Civil War diary recounts the conflict through priestly eyes, as he lives and travels alongside the soldiers under his spiritual care. 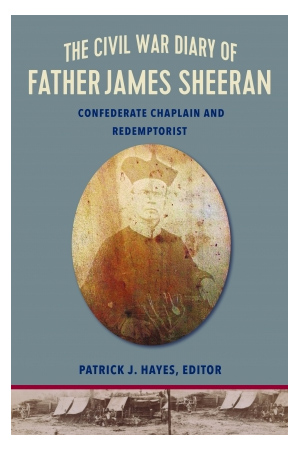 An Irish immigrant and a widower, Fr. Sheeran received spiritual formation under Blessed Francis Xavier Seelos, and took an assignment as a parish priest at St. Alphonsus in New Orleans, where he was serving when the war began. Although officially chaplain to the Louisiana 14th Regiment, he ministered to thousands of men in the Army of Northern Virginia, and to civilians and wounded soldiers on both sides of the Civil War. With an introduction by editor Patrick J. Hayes, and footnotes that correct Fr. Sheeran’s factual errors, illuminate slang, or explain references to people and places in the war, The Civil War Diary of Father James Sheeran will attract Civil War buffs, military historians, and anyone interested in the history of Catholicism in America.

From the pages of the diary emerges the indomitable person of Father Sheeran, whose mission territory covered much of the blood-soaked battlefields of the Civil War. With single-minded purpose, he charges ahead to minister to souls at all costs: when the Confederate army denies him a pass he needs to facilitate the exercise of his priestly work, he stares down General Robert E. Lee himself, and scolds him into granting his request.

Feisty, tireless, and stern, he administers sacraments, preaches hour-long fire-and-brimstone homilies, and fearlessly works to reform the morals of the men in camp. With priestly authority and the sharp wit of an Irishman, he devotes himself to stamping out the many vices of his rambunctious soldiery, occasionally taking matters aggressively into his own hands. When he discovers some men gambling on a Sunday, he sneaks up and snatches their winnings, giving the money to an orphanage. More than once, when he finds men drunk, he craftily asks for a drink only to take away their liquor for their own good. It’s a tough love that stands in firm opposition to the morally-permissive tolerance worshiped by American culture today. For Father Sheeran, hurt feelings meant nothing compared with the salvation of souls.

The Reverend Father has his rough edges. He makes no bones about where he thinks unconverted Protestants and Freemasons are going when they die. He doesn’t suffer fools gladly, and fills his diary with comments on the hygiene, ill-manners, and conceit of the people he meets. He uses the common racist language of his era. He condescendingly lectures captured Union soldiers and civilian Yankees on the folly of their political loyalties.

Indeed, many readers will be struck by Fr. Sheeran’s passionate commitment to the Confederate cause, a good reminder to Catholics that the complicated prudential judgments of the political realm don’t always fall neatly along doctrinal lines. Lecturing an Irish Yankee, he lambasts the North:

And now my good friend, if we admit the brief, but common sense definition of tyranny, “the exercise of authority without justice or right,” we must also admit that the present war waged by Lincoln’s government against the people of the South is one of the most unjust, tyrannical and barbarous ever waged by a power calling itself civilized.

Full of zingers about “Lincoln’s bandits” and “Beast Butler” (the unpopular Northern General Benjamin F. Butler who governed occupied New Orleans), and calling the Union President “King Abe I,” Fr. Sheeran’s account repeatedly denounces the Federal Army as barbarous and cruel, even as “the Moloch of the North.” We share his anger when he relates the shocking desecration of a Catholic church in Winchester by Union soldiers:

They broke open the door, took out the pews, smashed the crucifix and otherwise profaned the place. Their next effort was to drive their horses into and convert it into a stable. But after some ineffectual efforts to drive them into the church (the animals could not be whipped in) they conceived an idea worthy only of a Yankee Puritan and their great leader, Mr. Lucifer; they converted the confessional into a water closet [toilet]. This is no hearsay. I afterwards heard confessions in the same place and saw the marks of their filth.

Some readers may be surprised that, in the five hundred pages of his diary, Father Sheeran never once addresses the issue of human slavery. Denouncing a conflict caused by “religious fanatics and political demagogues,” he views the Civil War exclusively as an act of Northern aggression seeking to deny Southern states their constitutional right to secede. The problem of slavery, which had long been a cause of sectional tensions and even violence, finds no place in his account of the war. Popes had been condemning the enslavement of Africans as early as the 1400s, but some nineteenth-century U.S. bishops and priests did not embrace this teaching, especially in the South. Furthermore, thinkers on both sides of the debate offered persuasive arguments about whether states could secede from a Union they had helped to create. As such, Father Sheeran’s Confederate perspective on the war offers us insight into the complexities facing American Catholics during this difficult historical moment.

For all his partisanship and acerbic commentary, Father James Sheeran saw himself first and foremost as a Catholic priest. His diary recounts an endless stream of sacraments, preaching, and conversions. He celebrates baptism, Mass, and anointing of the sick; he spends hours in the confessional, and even performs a marriage along the way. Sometimes, a particularly laconic sentence reveals just how busy he was about the business of souls: “Hear confessions all day in a cold shanty without any fire, suffer much, but consoled by the number of confessions.”

At times, his pastoral heart suffers much on behalf of his men. Once, he finds himself stranded away from the front after a battle. Unable to find his way in the dark, he writes: “I was nearly two miles from the battlefield and the thoughts, that many of my men were now weltering in their life-blood and perhaps yielding up their spirits without the consolation of the Sacraments, pierced my very soul.”

But he also finds great joy. On Easter Sunday, under the thin covering of a tent, he says an outdoor Mass in the dead of winter: “To see so many of our brave soldiers standing nearly knee deep in the snow, cheerfully awaiting the offering of the Holy Sacrifice of the Mass, was perhaps one of the most consoling sight of my life….”

In ministering to the souls of the Confederate army, Father Sheeran also suffered greatly in body and mind. His diary recounts endless illnesses, exhaustion, and hunger. He falls asleep to the sound of Yankee shelling. Toward the end of the war, although granted permission to minister to captured Confederate soldiers behind enemy lines, he nonetheless finds himself imprisoned by the Yankee army. In a louse-infested stable converted into a jail, Father Sheeran suffers all the indignities and horrors of Civil War prisons—scurvy, filth, poor rations, a single open-air latrine, and harsh treatment because of his Confederate loyalties. Although he was eventually released, for a time his prospects are grim. In his lowest moment in the prison, he writes: “I think much of death, but care little about it, could I but receive the benefits of the sacraments. I could not murmur against Providence, for I knew I deserved much more severe punishment at the hands of God, though I was conscious I did not deserve it from man.”

Yet ultimately, The Civil War Diary of Fr. Sheeran tells the story of a man whose Catholic priesthood transcended the fratricidal sectional conflict, even while he maintained his fierce loyalty to the Confederacy. In a moment that illuminates both his pragmatic temperament and his human tenderness, he gives the last of his unconsecrated Mass wine to revive a couple of wounded Yankee soldiers. It isn’t communion, and yet it is: to Fr. Sheeran, men were men, souls were souls, and the entire nation at war was his congregation.

The Catholic Church, American labor unions, and the New Left

When Pope Pius XII died in 1958, he was honored across the world, with the New Yorker leading the praise, calling him a “great pope.” That perception rapidly changed, however, in the 1960s. The pope […]

The roots, rise, and collapse of Catholicism in America

Dr. Christopher Shannon is a member of the History Department at Christendom College and author and co-author of several books. His most recent book is American Pilgrimage: A Historical Journey through Catholic Life in a […]