Cologne (kath.net) When the YOUCAT Foundation and I first set out together to develop a Bible for young people, an experienced publisher said to me: Think it over seriously!  A Bible isn’t easy as it might seem.  To keep the entire body of the text in view, to make it all legible, not to leave anything out, and then the corrections – it can drive you crazy.  It can go wrong big-time.

Alright, I then thought with sincere respect and not a little sheepishness, it would be better not to get too over-confident if the project comes up.   And I thought about my own mini-bible, chock full of dense, small-print, precisely type-set text, and it dawned on me, that if it becomes a reality, that I am permitted to develop a Bible, then it has to be done right, really right.  I won’t do less.

For me the encounter with the emerging idea of a youth catechism almost seven years ago was the beginning of a completely new chapter in life and in my professional career path.  My work till then dealt with local or regional contract jobs, whereas the YOUCAT project introduced me to a new, unexpected global dimension and with it also a completely new expectation of serious, clear communication with particularly complex subject matter.  Yet, the biggest of those was that it fulfilled in the highest degree my yearning to visualize precisely the subject matter that I myself stand for. 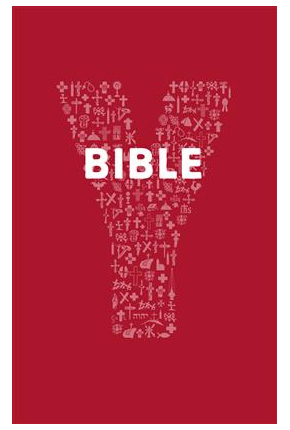 Then, about three years ago, the initiative arrived from the editorial staff of the YOUCAT Foundation.  The idea was to develop a bible with commentary for adolescents and young adults which not only was supposed to make the text exegetically understandable, but also let celebrities from the Church, the cultural or business world, and – most importantly – the faith-witness of young people have their say.   And incidentally to illustrate the entire book with stick figures – which was my job, besides layout.  So, not only an informative, instructive book, but also an inspiring book.  And I said to myself: Ok, now stay the course.

The work on the content was an intensive challenge for the authors and the publisher.  We meditated with young people on the passages which are particularly close to their hearts.  With the exegetes we clarified the tricky passages and extended an invitation to reflection with many quotations and incentives.  And it was decided to design our edition as selections from the Bible, which meant to abbreviate it.  Time and again that was the most difficult part, which as it will rather quickly become clear to experienced Bible specialists when reading the Y-Bible.  But our aim was to draw an easily understandable continuous thread through mankind’s history with God: from the first ray of light in Genesis to the vision of the second coming of Christ.  Our purpose was to make the Bible accessible to a readership that seldom or never reads the Bible and to design it so that one can read it through in one go, without it becoming boring.

For me this book was the greatest challenge of my professional life.  I was allowed to produce a bible!  The book of books – and thus the crown of all print designing!  My collaboration with the publisher was very close, because content and form had to experience a symbiosis if the book was going to remain understandable.  First of all the text of the bible had to fit, in order to leave enough space for the illustrated middle section.  Then there was the question of the commentaries, which were very carefully selected, adapted and cross-referenced, until it all matched on each one of the 432 pages.  I learned a lot about the texts in connection with that effort, but it became even more exciting as I began to illustrate the pages.

On each double page there is a drawing of a situation corresponding to the content in question.

In the case of narrated texts, that was relatively simple, but for the lyric parts it was rather tricky.  The Psalms and Proverbs in particular I had to read three or more times and then had to meditate and think over what sort of yearning or image was behind it.  Often I was so deeply into it that when my then-fiancée called, I could only say, “Darling, I can’t right talk now, Nebuchadnezzar has just flattened Jerusalem again, and things are topsy-turvy here!”

Those were taxing – but unusually enriching, encouraging and happy times.  As I held the just-completed and printed book in my hands a week after our wedding, it was really something altogether rare.  I felt a singular emptiness and the feeling came over me that it was no longer my book or my baby, but a book belonging to others.  As if a father were to say to his grown child with a hidden sigh of farewell: You now have everything you need; now go out into the world and make something of it.

Then, early in the year, I applied for the Red Dot Award.  My expectations were not too high when I entered the Bible in the contest because there were plenty of entries, some of them quite good. Besides that, the panel of judges is totally interdisciplinary.  It is made up of experts in art, industry, design, culture, and of people from all over the world with all sorts of backgrounds.  That being the case, I had only faint hopes and was accordingly surprised when I received the news that my baby was in the running.

What pleased me most was the fact that a bible had managed to convince such a panel, especially when you consider that the religious content is not necessarily appealing or politically-correct.  Shouldn’t the Church take such a signal seriously, and more energetically use the media, which have so clearly proved their relevance, in proclaiming her message?

The YOUCAT project with its media is one of the most valuable tools the Church has at its disposal for teaching and formation.  Most recently the Y-Bible shows that Catholic content and themes can be communicated far and wide.  In our visual age, a key role belongs to the multi-media formats.  After centuries in which the Church relied especially on artistic means to spread the faith, whereby great works of art were produced, she is nowadays light years behind state-of-the-art standards of secular institutions in visual arts.  It is not only a matter of the what of the Good News, but also a matter of the how of its presentation.  The brilliance of the Good News must be not only understandable, but also visible.  For that reason we also need to make the highest demands in design matters. The Red Dot Award may offer encouragement to believe that our message can look at least as good as secular subject matter.

The Bible is the greatest love story of all times: God becomes man!  A more fascinating story has never been told.  For that reason Pope Francis said in his forward to this Bible: “This book is like fire!”  I can vouch for that.  I myself have experienced it.

Sigrid Undset (1882-1949) is most famous for her award-winning Kristin Lavransdatter trilogy. But she wrote much more than that epic work of historical fiction. Sigrid Undset: Reader of Hearts, a new biography and study of […]

G.K. Chesterton on “the Only State that Creates and Loves Its Own Citizens”

G.K. Chesterton was a monumental figure in the Catholic Church of the twentieth century whose continuing influence is as robust as his famous girth. This year commemorates a century since his conversion (on July 30, […]