Since the worldwide riots and protests following the death of George Floyd in 2020, the concerted attack on western culture and traditions, going on for many years among our elites, has taken on a new ferocity and now manifests itself in all areas of life from politics to religion, the arts to business. Douglas Murray’s The War on the West represents a worthy attempt to combat these attacks and restore a degree of sanity to the modern West. 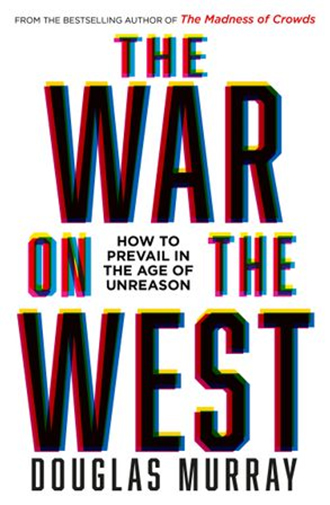 At the forefront of the attack on the West is the ideology known as Critical Race Theory (CRT). CRT has its origins in American academia and developed from the 1970s onwards. It essentially interprets everything in the world through the lens of race. It is tellingly described by two of its leading supporters, Richard Delgado and Jean Stefancic in the following terms:

…a collection of activists and scholars interested in studying and transforming the relationship among race, racism and power. The movement considers many of the same issues that conventional civil rights and ethnic studies discourses take up, but places them in a broader perspective that includes economics, history, context, group and self-interest, and even feelings and the unconscious. Unlike traditional civil rights, which embraces incrementalism and step-by-step progress, critical race theory questions the very foundations of the liberal order, including equality theory, legal reasoning, Enlightenment rationalism, and neutral principles of constitutional law.

Academics who support CRT call themselves academics ‘with an activist dimension’. In other words, they are proudly biased. Central to CRT is a belief in the collective guilt of white people. Murray states:

The claim is that white people are in their totality of prejudice, specifically racism, from birth. That racism is interwoven so deeply into white-majority societies that the white people in those societies do not even realize that they live in racist societies. Asking for proof was proof of racism…even the concept of aspiring to be “color-blind” when it comes to issues of race is itself deeply racist.

If there is an individual who exemplifies this thinking, it is the academic Ibram X. Kendi. Kendi has even produced a book titled Antiracist Baby, a nine-step plan for turning babies into professional anti-racists. Kendi’s most well-known book is How to Be an Antiracist. However, as Murray notes, Kendi’s definition of racism is apparently anything he doesn’t like, while antiracism is whatever he does like. As Murray writes:

Inevitably, among the black people that Kendi denounces as racist is the conservative Supreme Court Justice Clarence Thomas.

This thinking of Kendi and others like him is at the core of the war being waged against the West. Murray sees this war as rooted in Marxist and anti-colonialist ideology. He traces the roots of the anti-western philosophy to thinkers including Jean-Paul Sartre, Franz Fanon, Edward Said and Michel Foucault. Strangely, he does not mention the Frankfurt School and its influence within American universities.

The greatest strengths of Murray’s work are his refutation of anti-western myths and exposure of the extreme and often ridiculous levels to which the ‘woke’ anti-racist obsession can go.

One of the most commonly heard anti-western statements is that the European nations practiced slavery, a crime for which they must continue to do penance hundreds of years after its abolition. But the West is also unique in having abolished slavery and sought its abolition in other parts of the world. Murray says:

Murray further demolishes the notion of ‘white privilege’ by citing the historian Michael Taylor, who found that the life expectancy for slaves in Guyana was twice that of an English industrial worker in Lancashire or Yorkshire. On the question of reparations for slavery, Murray notes that the British navy paid a massive reparation with 1,500 men dying in Britain’s efforts to end slavery in the mid-19th century. Between 1808 and 1860, Britain’s West Africa Squadron captured 1600 slave ships and freed 150,000 Africans.

Murray provides countless examples of the attack on western culture, which goes to the very deepest levels. The moral legitimacy of great cathedrals and works of art has been questioned because of alleged links to slavery or colonialism. London’s Globe Theatre is seeking to ‘de-colonise’ Shakespeare, while the Tate Britain, one of London’s leading art galleries, has permanently closed its Rex Whistler restaurant due to imagery in the Whistler mural that covers the walls being perceived as racist.

Even botanic gardens have been targeted, with Britain’s most well-known botanic garden, Kew Gardens, being branded as colonialist and racist. A Kew botanist stated that ‘We shouldn’t forget that plants were central to the running of the British empire’. Kew released a podcast titled ‘Dirt on Our Hands: Overcoming Botany’s Hidden Legacy of Inequality’ in which BBC broadcaster James Wong claimed to expose how the ‘the seemingly democratic and wholesome world of plants’ masked a hidden world of inequality and racism. Wong claimed that British gardening has ‘racism baked into its DNA’. This illustrates the farcical level to which ‘woke’ political correctness has been taken.

Defending the West … and being white

One of Murray’s most powerful responses to anti-white, anti-western ideology is discussed in the context of a discussion between conservative commentator Christopher Rufo and Marc Lamont Hill of the Black News Channel. Lamont Hill asked Rufo, ‘What do you like about being white’? Though Lamont Hill had no trouble talking about what he liked about being black, the question posed to Rufo was in Murray’s words ‘an unbelievably dangerous, potentially career-ending, land mine.’ Rufo fumbled and failed to give a satisfactory answer to the question. Murray attempts to give an answer on behalf of Rufo. This measured response is worth highlighting:

…The good things about being white include being born into a tradition that has given the world a disproportionate number… of the things that the world currently benefits from…They include almost every medical advancement… almost every scientific development that the world now benefits from… White people founded most of the world’s oldest and longest-established educational institutions…  Almost alone among any peoples it was white people who… took an interest in other cultures beyond their own, and not only learned from these cultures but revived some of them… It is western people who developed the principle of representative government… developed the principles and practice of political liberty, of freedom of thought… of freedom of speech… All this is before you even get onto the cultural achievements that the West has gifted to the world.

We might also mention here the spread of Christian faith and values to the far corners of the world.

One major aspect that is missing in Murray’s indictment of the attack on the West is any discussion of the role of marriage and the family. The attempt to undermine and redefine marriage has been central to those forces attacking the West. The restoration of traditional marriage and support for the family must surely be central to any attempt to defend the western legacy. This is a serious omission from Murray’s work.

Overall, however, this is an enjoyable book which highlights well the extent to which woke cultural neo-Marxist forces have undermined western culture.

The War on the West: How to Prevail in the Age of Unreason
By Douglas Murray
HarperCollins, 2022
Hardback, 320 pages

About Piers Shepherd 9 Articles
Piers Shepherd is a freelance writer based in London, England. He has had articles published in the Catholic Herald, Christian Order and the Catholic Medical Quarterly among others. He obtained an MA in Theology and Christian Ministry from the Franciscan University of Steubenville and currently works as a researcher for a trust defending traditional marriage and family in the UK.

Bishop Baker of Birmingham reflects on being a shepherd, scandals, and the South

Bishop Robert J. Baker, 75, has served as bishop of the Diocese of Birmingham, Alabama, since 2007.  He was born in Ohio and began pursuing his studies for the Diocese of Toledo, but as there […]

All One in Christ is a meticulous, temperate response to Critical Race Theory

Widespread riots and violence were not the only consequences following the death of George Floyd in police custody in 2020. In our intellectual life, as Edward Feser observes in his taut, riveting new book All […]