Aaron Renn’s article “The Three Worlds of Evangelicalism” in the February issue of First Things attracted attention for it poignant analysis of the growing divisions in contemporary evangelicalism between what he calls the elite “culture engagers,” the explicitly leftist progressives, and the “culture warrior” anti-establishment populists. Reformed Baptist historian Caleb Morell in a subsequent letter to First Things declares that “Reformed Christianity strikes the right balance” and presents a rebuttal to the doctrinally vacuous “moral therapeutic deism” that has become common among many evangelicals. Morell approvingly cites John Calvin and his Institutes of the Christian Religion to help direct evangelicals back to Christ. 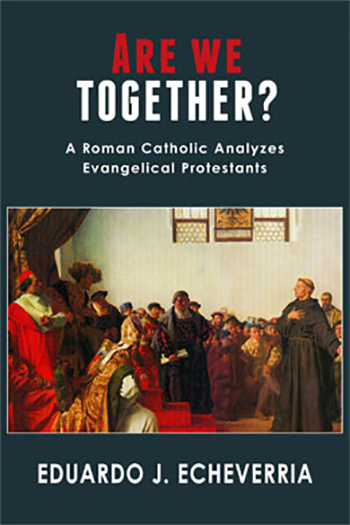 Of course, Morrell’s proposal presumes something many Protestants would not accept: namely, that Calvin has some manner of theological or ecclesiological authority worth considering, and even following. To recognize that reality is not necessarily to question the French Reformer’s intelligence, holiness, or knowledge of Scripture. Rather, it is to identify a problem that has haunted Protestantism since the beginning: the problem of authority.

Eduardo Echeverria, Professor of Philosophy and Systematic Theology at Sacred Heart Major Seminary, Detroit, knows a thing or two about the problems in Protestantism. A former Calvinist, he has devoted significant personal energy to ecumenical dialogue, manifested in his membership in the organization Evangelicals and Catholics Together, and his extensive study of the great Dutch Reformed theologian Gerrit Cornelius Berkouwer. In his new book Are We Together?: A Roman Catholic Analyzes Evangelical Protestants, Echeverria confronts some of the most salient problems underlying contemporary Evangelicalism, and in the process exposes the inadequacy of calls to just return to Calvin (or any other Reformer, for that matter).

This directly relates to the whole authority problem: namely, every Protestant is ultimately his own authority on what Scripture teaches. He may express his approval for Gregg Allison, Leonardo De Chirico, John Calvin or Martin Luther. But in the end, it is the individual Protestant who must decide how well each of these men’s theology aligns with Scripture—of course, as he personally understands it.

This is the case not just with how Protestants treat other Protestant “authorities” but how they interpret the earliest creeds and councils of the Church. Yes, Allison rejects the idea that the principle of sola scriptura means “that Protestants recognize no authority other than Scripture and denounce any kind of tradition outside of it. This is simply not true…. Scripture alone does not mean there is only one authority.” He then explains that Protestants attribute “presumptive” authority to creeds (e.g. Nicene-Constantinopolitan, Apostles’, Athanasian, Chalcedonian) and councils (e.g. Nicea, Constantinople, Ephesus, and Chalcedon).

Yet, in response, Echeverria observes it isn’t clear “why these creeds and councils possess authority, presumptive authority, as Allison attributes to them, or binding authority.” Perhaps worded more bluntly, Protestant appeals to extra-biblical authorities are arbitrary and ad hoc, because Protestants retain the right to pick and choose which ones they accept as legitimate. And if individual Protestants are the ultimate arbiters of which councils and traditions are good and which ones are bad (say, Nicea II or Marian devotion), then they don’t really have a coherent conception of extra-biblical authority. It’s simply a personal preference.

Echeverria is well familiar with this Protestant dilemma. He thus asks how people like Allison can affirm that extra-biblical tradition can play a role in their theology, “if the Bible alone authorizes a correct interpretation of itself,” given the fundamental disagreements between various groups of self-designated Christians over what the Bible teaches. Allison’s answer to this manner of argumentation is entirely inadequate. He argues:

Importantly, the ultimate arbiter of Scripture is not the individual or interpreter. Rather, because of its divine authorship, Scripture itself is its own self-interpreting, ultimate authority. Protestants should understand and apply it with reliance on the illumination of the Holy Spirit.

One problem with this line of thinking is that Scripture is not a person, but a book. It may be a divinely-inspired, inerrant book. But it is still a book. It cannot interpret itself. Someone must interpret it. That doesn’t mean certain passages can’t shed light on other passages. But ultimately the reader is one deciding what light is shed. Thus, to say that Scripture interprets itself is an entirely inadequate method for resolving interpretive and theological disagreements.

There is by extension a “magisterial vacuum in contemporary Protestantism, which Echeverria refers to as “the unfolding of the logic of Protestantism — separating the Bible from the Church — that has led to a crisis of authority, indeed, a crisis of faith in the authority of Scripture.” What is needed, argues Echevarria, is a “trilateral conception of authority wherein Scripture, tradition and the Church’s teaching office, being intrinsically and necessarily related, operating together, but exercising authority in a way that is unique to each one of them.” That would be Catholicism.

As a former Protestant, the above problem alone was enough to deal a fatal blow to my confidence in Evangelicalism and Reformed theology. But it’s compounded by many others. One I found particularly bizarre in Echeverria’s discussion is something he calls “meaning holism,” which he identifies as increasingly common among Evangelical thinkers.

De Chirico, for example, “stresses the incommensurability between Catholicism and Protestantism because the meaning of all of the words in a theological system are interdependent.” Echeverria quotes De Chirico:

So, these faiths [Catholicism and Protestantism] look somewhat similar, yet they are radically different. The question is: how can we meaningfully speak of the ‘same’ gospel if the two have core commitments that do not match. The problem lies with the way in which the same words are understood differently.

In short, “meaning holism” asserts that the differences between how two groups — in this case, Catholics and Protestants — understand grace, justification, or the Church, are so divergent that we cannot even communicate about them. “Consequently, meaning holism also imperils the matter of disagreement between two people,” explains Echeverria. If true, the result is that communication between people operating in different theological systems is impossible.

But if everything is exclusively relative to our own conception system, then our problem is not simply theological, but philosophical. Or, as Echeverria puts it: “On this view, not only justification of beliefs but also truth itself is made to depend on systems.” Meaning holism is a problem not only for ecumenism, but Evangelicalism and its internal coherence. For if Evangelicals embrace this “meaning holism” premise, how could they possibly persuade non-Christians of the truth of their beliefs? According to this argument, there would seem to exist insurmountable obstacles to trying to explain God, truth, or salvation to non-Christians.

“Meaning holism” sounds a lot more like postmodernist or deconstructionist philosophy than anything one finds in the Church’s tradition, whether one is talking about Augustine, Boethius, or Aquinas. That’s perhaps not surprising, given that the Reformation represented not only an ecclesial and theological departure from Catholicism, but a philosophical one. Luther rejected not just various Catholic doctrines, but the broader Aristotelian-Thomist philosophical tradition in which Catholicism operated, in favor of the nominalist thinking he had encountered in the writings of William of Ockham. Nominalism, in short, rejects universals, meaning that ideas are just names and do not correspond to reality (in contrast to realism, which argues that they do).

Though your average Evangelical or even Calvinist hasn’t a clue about Luther’s nominalism, its influence over all subsequent Protestant thought cannot be overstated, and explains many of the traits we often associate with Evangelicalism. That includes, for example, an emphasis on the individual spiritual experience of the Christian (if not some personal revelation inaccessible to others) over argumentation. It also includes a suspicion towards nature as a source of truth — and thus the popularity of a certain form of biblicism that believes all we need to know not only about God but all of reality is contained in the Bible, mediated to the individual Christian. Or consider the emphasis on the “invisible church” over-and-above the visible church, a doctrine promoted by Luther that has been used to downplay the scandal of endless ecclesial splintering of Protestant denominations. All of these stem from a denial of universals.

Echeverria is not the first person to identify the weaknesses in Protestant conceptions of interpretive authority or its tendency towards philosophical incoherence — counter-Reformation Catholic apologists such Robert Bellarmine and Francis De Sales recognized much the same. Nor, sadly, will Echeverria likely be the last, given that many Protestants seem unaware, or perhaps impervious to these challenges. That in-and-of-itself is also a fruit of a hyper-individualized, emotivist brand of Christianity, since arguments matter less than personal experience, such as the moment an Evangelical is “saved.”

However, there is reason for hope, stemming from the fact that whatever the depth of our disagreements, we remain together at least in one sense. Echeverria explains:

By virtue of our baptism, we are all incorporated into Christ, enjoying a unity as brethren in Crist, and hence with the Church, however imperfect. Catholics may legitimately engage in an ecumenical and apologetical stance toward evangelical Protestants.

We should pray that the hard work of people like Echeverria, through the power of the Holy Spirit — bears much fruit in this centuries-long ecumenical project.

Are We Together?: A Roman Catholic Analyzes Evangelical Protestants
By Eduardo Echeverria
Lectio Publishing, 2022
Paperback, 216 pages

From 1989 until roughly 1996, I was formally involved in the ecumenical movement, jetting off to regional and World Council of Churches meetings on five different continents. By 1991 in Canberra, Australia, I came to […]

Theology gets a bad rap, often seen as a bunch of eggheads asking questions that no one really cares about. In the Middle Ages, it revolved around how many angels could dance on the head […]