The Fathers of the Church have insights and wisdom to offer on just about any theological topic. During the first centuries, after the Resurrection, the greatest theologians of the day were working tirelessly to defend orthodoxy and to teach the faith, discerning and clarifying beliefs about the most central tenets of Christian belief. 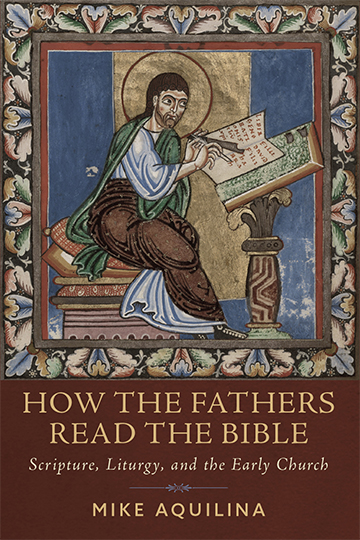 Some of most important questions that had to be addressed were focused on the content and interpretation of Sacred Scripture. Which of the many writings were inspired? How to know? What role does Scripture play in the Church’s life? In her worship?

Mike Aquilina has written an immensely helpful book titled How the Fathers Read the Bible: Scripture, Liturgy, and the Early Church (Emmaus Road, 2022), which shows how the Fathers grappled with these questions, and in particular how Sacred Scripture was encountered and interpreted in the context of the liturgy. Aquilina is a popular authority on the Fathers of the Church, and his many books, articles, videos, and podcasts have introduced the Fathers to countless people around the world.

Aquilina recently spoke with Catholic World Report about his book, the Fathers, and the importance of Sacred Scripture in the life of the Church.

Mike Aquilina: A few years back, the St. Paul Center for Biblical Theology produced a video series called “The Bible and the Church Fathers.” It was immensely popular, and many people used it for group studies in their parishes or their homes. Some wrote back, though, to say that they’d like to go deeper in their study. They wanted a book specifically about the Fathers’ reading of Scripture. When I see a need, I try to fulfill it.

CWR: You’ve written something like 60 books now, many of them covering the Fathers of the Church in various ways. You are also producing a podcast for Catholic Culture called “The Way of the Fathers”. At this point, do you ever encounter anything new in researching and writing? Are you still learning, in other words?

Aquilina: I learn something new from the Church Fathers every day. First of all, their writings are vast. If I live to be a hundred and twenty, I don’t think I’ll be able to consume all the works available in English. So, yes, I’m still working through the primary material. Much of it bears rereading, and I find myself going back to certain texts repeatedly. I can’t count how many times I’ve returned to the epistles of Ignatius of Antioch.

And then there’s the secondary material — the books about the Fathers written by the great scholars of our time. When I read Robert Louis Wilken, for example, I return to the Fathers with new glasses, so to speak, and everything looks so much clearer. The works of the early Christians are inexhaustible in their goodness and wisdom.

There’s also a certain sympathy, I think, that comes with age. I’m in a better position now to appreciate St. Jerome’s complaints about the aches and pains of decrepitude.

CWR: Why should we care what the Fathers have to say about the Bible? Shouldn’t the Bible speak for itself, as some Christians insist?

Aquilina: It was the Fathers who gave us the canon of Scripture, and it was the Fathers who taught the Church how to interpret the Scriptures. The meaning of the Sacred Page is not self-evident. If it were, Calvin would not have veered from Luther, and the Anabaptists would not have split from both those men; nor would we have witnessed the proliferation of denominations since the Reformation.

There are tens of thousands of “churches” now, and they differ in matters that are central and essential to the Christian faith: Is God a Trinity? Is Jesus divine in the way that the Father is divine? Does baptism do anything, or is it just a symbol? In matters of biblical interpretation, the ancient churches — Catholic and Orthodox — hold themselves accountable to the consensus of the Fathers. We’re not free to invent new ways of reading to suit our evolving whims and wishes.

CWR: The canon of Scripture was not settled immediately at the death of the last apostle. Can the writings of the Fathers on Scripture help us understand how the canon was settled?

Aquilina: They certainly can. We can look at the writings of the first generation — the men who were evangelized by the apostles themselves — and we can see which books they’re quoting, which books they consider to be authoritative. Then, in the second century, we find lists proposed by Melito of Sardis and others. They don’t match the final list quite exactly; they’re missing some books. In the third century, Origen discusses why there are debates over these books. But by the middle of the fourth century there’s nearly universal agreement — and this is confirmed by the decisions of regional councils in Africa, which are confirmed by the pope.

If you read the Acts of the Apostles, you see that the Church preceded the texts of the New Testament — and the Church produced these texts. It’s only natural that the Church should confirm them and canonize them. Apart from Catholic tradition, I believe it’s just about impossible to come up with a coherent account of the canon.

CWR: What role did the liturgy play in the early Christians’ encounter with Scripture?

Aquilina: The liturgy was where the early Christians encountered Scripture. It was the Bible’s natural and supernatural habitat. It’s clear from the New Testament books that they were written to be proclaimed in the context of worship. The letters of St. Paul and the Book of Revelation even provide occasional instructions and admonitions for the lector.

The Scriptures were composed for the sake of liturgical proclamation. This has always been the way of biblical religion. Moses read the Law aloud to the people and then sealed the covenant with a sacrifice. In the times of Josiah and Nehemiah, the books were read to the gathered assembly. The Psalms were sung at the Temple, and the prophets were proclaimed and interpreted in the synagogues.

The Fathers lived more than a millennium before the invention of mass communications. There was no printing press. There were no electronic media. And Christianity was illegal, so there were no opportunities for shouting the Gospel in the forum or the marketplace.

Most people in the ancient world could not read, because reading was not a skill that was particularly useful to them. So they didn’t read the word of God. They heard it. They received it. Faith came by hearing, as St. Paul said to the Romans.

CWR: When talking about the Fathers and the Bible, my mind immediately goes to St. Jerome, who has a reputation as a peerless Scripture scholar and translator. Was he really as good as they say?

Aquilina: He was a brilliant man, and he loved the Sacred Scriptures. He translated the books of the Bible at least twice and sometimes more. First he adapted the old Latin translations. Then he made fresh translations from the Greek. Then he learned Hebrew so he could go back to what he believed to be the original versions of the Old Testament.

He was very good, though fallible and sometimes lacking in the virtue of patience. He was irascible, somewhat thin-skinned, and he could be proud. But he loved the Lord, the Scriptures, and the fullness of the Catholic faith, and he placed his whole life at their service.

CWR: What of the common claim that Bibles were chained up in medieval cathedrals because the Church didn’t want the faithful to have access to it? What is the truth there?

Aquilina: That came later. The Bibles were sometimes chained in place, but only so that they couldn’t be stolen and smuggled away. Remember, there was no printing press. The books of the Bible were precious and had appreciable resale value. When chains were there, they were there to keep the books for the people, not from the people!

CWR: What do you hope readers will take away from the book?

Aquilina: An appreciation for the Word of God as we receive it in the Mass. That’s where it comes to us in power. The Holy Spirit is active in that moment, not only in the preaching of the clergy, but also in the way we listen. It’s not dependent on the skill of the preacher or the lector. God is working powerfully even when the skills are rudimentary.

We can see that principle at work in the lives of the Fathers, in the conversions of St. Anthony of Egypt and St. Augustine of Hippo. But it’s assumed in the preaching of all the Fathers.

I hope that, through my book, the Fathers will inspire preachers to be better preachers, but also move the laity to be better hearers. We have so much to learn from our ancestors in the faith.