Edith Stein (1891-1942) was a Jewish convert to Catholicism, a Thomist-phenomenologist scholar, and a victim of Nazism. Her life has inspired countless Christians. Hilda Graef, herself a Jewish convert to Catholicism, shows how Stein exemplified some of the greatest of Christian virtues. These include humility, steadfastness, the strong desire for justice and the truth, and love for 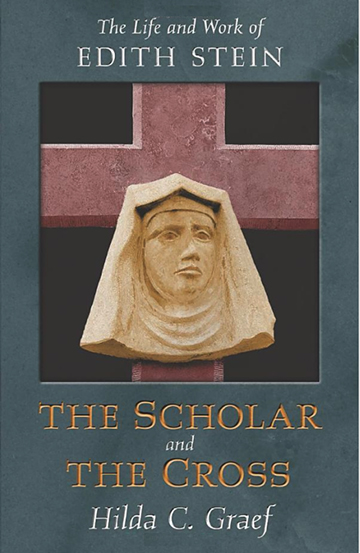 others. Her embrace of the Church was not an attempt to fit in or escape from something, but an acceptance of the Cross. The author shows that she was not a romantic or sentimental Christian.

The book will appeal to a wide audience, from the more scholarly to the more devotional. Above all, readers will come away with a strong impression of Stein’s Carmelite spirituality.

Graef’s honest depiction of the saint and martyr includes certain shortcomings, such as Stein’s more distant side that led her to be unapproachable for some students, at least initially. Graef also evaluates her sometimes controversial interpretations of Thomism. Yet Stein’s quiet but intense faith, authenticity, and brilliant intelligence gave her an unusual charisma.

Graef shows how Stein’s Jewish roots buttressed her Catholic faith. Her conversion hurt her religiously observant mother, though the two remained close, even if their relationship often depended on letter writing. Graef’s portrayal of this relationship is a highlight. Graef’s citation of many personal letters, another strength of the book, sheds further light on this and other relationships, and reveals Stein’s personality which could be both forceful and, yet paradoxically, delicate.

Despite Stein’s bookishness, according to Graef, her circle of friends, family members, and scholarly colleagues played a crucial role in her intellectual, spiritual, and psychological growth. Her many letters display wisdom, particularly when advising younger women on their vocations and studies. She repeatedly counseled others to depend on God.

Stein advocated for women’s rights. Unfortunately, Graef shies away from scrutiny of Stein’s pre-conversion feminism, and only touches on her speeches on women’s concerns as a Catholic philosopher. This is a serious lack, as the saint’s insights into marriage, childbearing, family planning, and service to the Church could speak to contemporary society. Her wisdom, learning, and charisma make her words as relevant today as ever. Readers may also be curious about how her faith affected her feminism. Though introverted, Stein was keenly interested in the social issues of the day.

Graef provides a much-needed, detailed portrayal of what was occurring in German society as a whole and how this impacted Stein as her Jewish, German, and Catholic natures had melded together to make such a unique person. According to Graef, Stein knew exactly who she was: A faithful daughter of the Church. Unfortunately, Stein’s inner peace that came with the move to Carmel was shaken by “the incomprehension of her mother”:

In a letter of 4 May she told her sister Erna how sad it made her that her mother had such wrong ideas not only of the Catholic faith and the conventual life in general, but also of her own motives for becoming a nun; and the worst was that she could do nothing to change this attitude.

Graef’s meticulous research reveals how Stein’s life at the Carmel deeply changed her personality. She became more feminine, maternal, warm, and even playful. One first-hand account of a friend notes the spiritual transformation:

Her radiant expression and her youthful appearance in this week of her profession are unforgettable. I think she looked twenty years younger, and I was profoundly touched by her happiness. She must have received very great graces from the Lord – like the saints.

Graef argues that Stein also had tensions with the other sisters as part of the normal adjustment to a new life, an unknown religious culture, and religious sisters from different educational and social backgrounds: “She had failed to understand that other people might be led by different paths, that the length of time a person was capable of spending on her knees in prayer was no measure of her holiness.”

This last point refers to Stein’s perfectionism, which aided her intellectual development while making her initially unapproachable as a teacher and then, in the convent, somewhat cold and inflexible at times. Graef argues that this rigidity did not block her growth in the community because her humility allowed her, in the end, to be more open. This depiction of Stein’s human side shows us that a saint is not a perfect human being.

One of the highlights of The Scholar and the Cross is Graef’s analysis of Stein’s intellectual development. She cites, for instance, Stein’s letter to a nun at Speyer in 1928, which expresses the spiritual side of this development: “It was through St. Thomas that I first came to realize that it is possible to regard scholarly work as a service to God.” In this same letter, she connects this scholarly work to the spiritual life and to evangelism: “I even think that the more deeply a soul is drawn into God, the more it must also go out of itself in this sense, that is to say into the world in order to carry the Divine life into it.”

Graef provides a strong introduction to Stein’s major works, including Finite and Eternal Being, her book on phenomenology and Thomistic thought. The author concludes, “Her work, despite certain deficiencies, will stand as the bold venture of a deeply religious mind trying to re-think the age-old question of finite and eternal being in the setting of modern philosophy, a search for truth in the spirit of St. Thomas himself.” Graef notes repeatedly that Stein’s phenomenological perspective impeded her full understanding or development of Thomistic metaphysics. This reflects the fact that Stein always remained a phenomenologist.

The core theme of the book is Stein’s resolute will in carrying her Cross. This makes her one of the great saints of the twentieth century, and even a model for what contemporary Christians may be facing in the next few years and decades. Seemingly despite her quiet, reflective personality, her charisma touched many. One admiring priest wrote in his reference letter for Carmel, “she will walk among you in silence like a ray from God.”

This well-researched book, a reprint of the 1953 original, provides a strong account of who Stein as a person, her social circle, her thoughts on the spiritual life, and her intellectual achievements. It ends by describing Sr. Benedicta’s last days, which the author believes testify to Stein’s sanctity.

The Scholar and the Cross: The Life and Work of Edith Stein
By Hilda C. Graef
Angelico Press, 2021
Hardcover/Paperback. 252 pages

The Martyrs of August

Some months, like August, seem to be populated by a very long procession of martyrs: The Holy Maccabees (1), Sixtus and his companions (7), Edith Stein (9), Lawrence (10), Pontian and Hippolytus (13), Maximilian Kolbe […]

A new anthology explores Stein’s contributions to philosophy and theology, offering insights into her thinking on faith and mysticism, Church-state controversies, the role of women, […]