We hear a lot these days about systemic, oppressive power structures that damage various racial, sexual, or gender identity groups. These institutions, we are told, perpetuate racism or “unconscious bias” against persons of color. Others enable the patriarchy, cisgender norms, or “heteronormativity.” Whatever the truth to these claims — and I confess that I believe there to be very little — they all elide one of the more obvious systemic biases among America’s elite institutions: that of anti-Catholicism. And nowhere is that bias more obvious then those institutions’ treatment of the Catholic Church’s sexual abuse crisis. 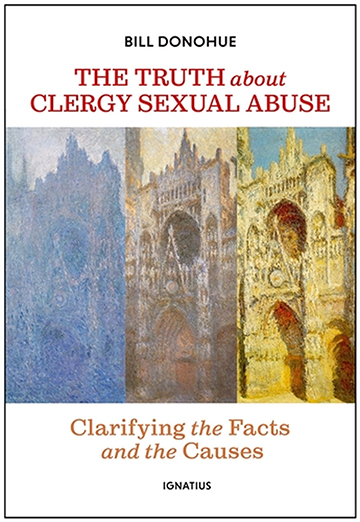 Indeed, as Bill Donohue’s new book The Truth about Clergy Sexual Abuse: Clarifying the Facts and the Causes exhaustively catalogues, one of the biggest lies believed in American culture is that the scandal of the Catholic Church’s sex abuse crisis is categorically different and exponentially larger than that of any other institution in the United States. For example, an editorial in the Philadelphia Inquirer in 2018 asserted that “nowhere has the abuse been as widespread and accountability so disregarded [as in the Catholic Church].” And a 2019 editorial in the Washington Post similarly declared that the Church has a “unique history as a haven for abusers.”

Yet, according to an extensive 2011 study of the Church’s handling of its sexual abuse scandal by the John Jay College of Criminal Justice in New York City, “no organization has undertaken a study of itself in the manner of the Catholic Church.” In truth, the Church monitors itself for sexual abuse allegations more carefully and reports incidents more regularly to the police than any other institution in this country. In 2010, even the president of the National Center for Missing and Exploited Children acknowledged that the Catholic Church had no bigger problem with abuse than anywhere else.

Professor Philip Jenkins, in his book Pedophiles and Priests: Anatomy of a Contemporary Crisis, estimated that the amount of Protestant clergy who were pedophiles was at least twice that of Catholic clergy. The Southern Baptist Convention, for example, has in recent years elicited increased attention for its failure to address sexual abuse. In Orthodox Jewish circles, when a sexual abuse accusation is lodged, a rabbinical court performs the investigation and never notifies the authorities. But it’s not just other religious organizations where this is a problem.

Children living with stepparents or unrelated adults are far more likely to be sexual abused, and only about 10 percent of perpetrators of child sexual abuse are strangers to the child. As of November 2020, the Boy Scouts of America reportedly faced 92,000 claims of sexual abuse from as many as 8,000 perpetrators. In recent decades, more than 100,000 men have been sexually assaulted in the U.S. military, and female service members face a much higher rate of sexual assault — about seven times higher.

Thousands of migrant children have been reportedly sexually abused while in government custody, while a recent study found that more than one-third of employees at group homes in the state of New York had committed abuse-related offenses. Nearly one third of criminal convictions of mental health industry personnel are for sexual abuse committed by psychiatrists, psychologists, therapists, and counselors. Indian reservations, children’s camps, professional sports, academia, corporations, the entertainment industry, corporate media, and public schools all suffer from widespread sexual abuse. A 2017 report funded by the U.S. Department of Justice found that an estimated 10 percent of K-12 students will experience sexual misconduct by a school employee by the time they graduate from high school. I don’t know what words to use to describe this besides disastrous, horrifying, embarrassing, and scandalous.

Meanwhile, the number of accused Catholic priests has declined sharply since the 1990s. Indeed, the worst years of sexual abuse in the Catholic Church (the 1970s) are long behind us. According to research done at Georgetown University (not exactly a great defender of conservative or orthodox Catholicism), the average number of allegations against current clergy members was more than 6,000 than in the 1970s; by the 1980s it had dropped to about 3,600, it further dropped to about 780 in the 1990s and to about 350 in the 2000s; it is now down to single digits.

And yet the caricature of the priest pedophile bogeyman persists. A 2018 CBS poll found that 69 percent of respondents thought the priestly sexual abuse scandal was “very serious.” A Pew Research Center survey in 2019 found that eight in ten Americans believed Catholic clergy sexual abuse was an “ongoing problem.” Why?

Perhaps it has something to do with corporate media giving more attention to sexual abuse scandals in the Catholic Church than any other institution in America, and publishing editorials and featuring evening news segments claiming that the Church is still a hotbed of sexual scandal. Perhaps it has something to do with an entertainment industry that disseminates an endless supply of films and television programs that castigates the Catholic Church over sexual abuse (often with dishonest story lines), while hypocritically ignoring its own sexual scandals. And perhaps it has to do with lawyers and victims advocacy groups more focused on turning a profit than going after the new, non-Catholic loci of sexual abuse in America.

There is other data worth noting. The majority of victims of sexual abuse (81 percent) have been male, and 78 percent of victims have been postpubescent. Less than 4 percent of clergy sexual abuse victims were boys ten or younger. And this trend is the case not just in the United States but across the world. Though there is no hard data on the subject, numerous authors and researchers who have studied the clergy sexual abuse scandal estimated that in the 1970s and 1980s somewhere between one-third to two-thirds of priests were homosexuals. Cardinal Gerhard Müller has argued, “It’s more a homosexual attack than a pedophile attack.”

To understand how this could have happened, one need only look to what was going on in Catholic seminaries in the 1960s: flirtation, if not capitulation, to the sexual revolution. Catholic seminarians at that time were assigned articles and books that explicitly dissented from Church teaching on sexuality. This even included books by Alfred Kinsey, the now discredited researcher and promoter of the most bizarre and extreme sexual deviancies. Not only this, but many seminaries at the time were in open revolt against the Church’s teaching on contraception, manifested in such examples as the telegenic Catholic University of America professor Charles Curran, who publicly argued that Humanae Vitae should be rejected. In other words, an entire generation of Catholic priests were trained to believe the Catholic Church’s historic teachings on sexuality were wrong and would soon be overturned.

In sum, we have a systemic, institutional problem, one that stems from elite institution’s total capitulation to the sexual revolution and its ever-more deviant descendants. Corporate media, the entertainment industry, academia, big business, and even the federal government have all embraced this sexual ideology, which is not only at odds with historic Catholic teaching, but resulted in their own sex scandals. Let us list a few names: Matt Lauer, Harvey Weinstein, Larry Nassar, Jeffrey Epstein, David Petraeus. Should anyone be surprised then that all of these institutions — who aim above all for self-preservation — continue to pretend that these are just a few bad apples?

About Casey Chalk 31 Articles
Casey Chalk is a contributor for Crisis Magazine, The American Conservative, and New Oxford Review. He has degrees in history and teaching from the University of Virginia and a master's in theology from Christendom College.