In this invaluable reprint of a book from 1936, Van Treeck and Croft focus more on basic artistic features of typical examples of symbols. They connect the various examples to theology and Church history, which makes this a fascinating and informative work for theologians and historians. And the straightforward language, many pages of simple and easily-reproducible images, and accompanying guidance for each figure, will make Symbols of the Church a popular and useful addition to the homeschooler’s library. Middle-school to adult readers will enjoy and benefit from it. It can double as a memorable introduction to theology. 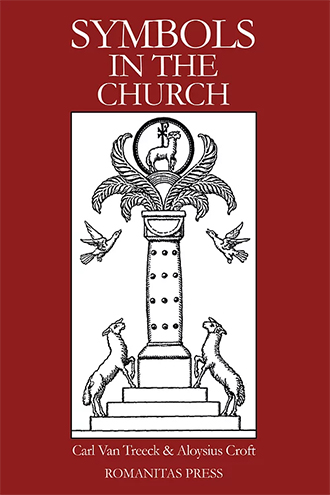 Many of these symbols, and the theology and liturgical practices behind them, were likely common knowledge when Symbols in the Church was originally written. However, much of this will be unfamiliar to readers today. The book unwittingly shows the deep changes that have taken place in the Church since that time.

Each of the chapters deals with a major topic: Jesus, the Trinity, God the Father, the Holy Spirit, Mary, the Apostles, the Church, and the sacraments. The chronological structure of analysis of each chapter enables the reader to follow the changes in the use and meaning of symbols throughout the centuries. Certain styles or representations dominated particular eras. Some would go in and out of fashion. There are some surprises. There were “no recognized early symbols of the Mother of God,” which of course contrasts with the abundance in the Middle Ages, including the lily as the symbol of her purity.

The authors provide practical advice to decorators of churches. Symbols must be used with care and discretion; they are not art, and attractiveness should not be the final goal or standard. In fact, “symbols should not be used merely because they are symbols. The decoration of church walls or windows must not consist of a collection of archeological curiosities.” We owe respect to these symbols because they refer to the most basic truths of the faith.

The use of decorative symbols needs to reflect their function, which is religious and, perhaps more secondarily, educational. Though this is a practical handbook, more guidance for readers on the educational value, if any, of these symbols would have helped us understand their role even better. The authors differentiate among symbol, representation, and allegory.

Symbols played an essential role in Christianity from its earliest days. The authors often refer to symbols from Rome’s catacombs, and ancient and medieval churches. This leads to interesting, even touching, information about the lives of Christians of past centuries. The catacombs are such rich depositories of symbols because they offered protection from the Roman authorities, “for even to the pagans places of burial were sacred, and burial societies were protected by the full force of Roman law.” In many ways, the lives of Christians and the practices of the faith differed greatly from those of today, but the essential truths were the same. The symbols demonstrate this.

Though the authors link symbols to history, their purpose is not to discuss the historical development of symbols in the Church. They keep their focus on judging how well a given symbol satisfies its function of pointing to a spiritual or doctrinal reality. It is not beauty or fashion, but doctrine, in the end, that decides on the appropriateness of a symbol. This means that “decorations of church walls or windows, or of an altar … should derive as far as possible from the same period and must have the same underlying philosophy.” Symbols cannot fully do their job of pointing to religious truths unless much thought is put into their creation and eventual location.

The authors argue that some symbols are multidimensional and nuanced. Those used for the four evangelists were not always the same as those for the four gospels. The gospels “were usually represented in the early period by four rivers, the four rivers of paradise, which also symbolized the four cardinal virtues. They are pictured as flowing from a rock or hill, a reminder that the truth flows from Christ as its source.” The pictures of the symbols of the four evangelists are among the most fascinating of all depictions in the book. Some of them would require the highest level of craftsmanship or artistic skill.

The authors repeatedly show how symbols may be understood as pointing to more than one element of the faith or individual. Symbols for the Eucharist may be the same as those for Christ, though others may be more specialized. The pelican as a medieval symbol of the Eucharist stemmed from the legend that it nourishes its young with its own blood by making a wound on its breast.

As the pelican symbol shows, not all symbols were explicitly religious in the sense that they came directly from the Bible or depicted aspects of Jesus’ life, death, and Resurrection. Some symbols have pre-Christian roots, and may be based on common sense. This includes the emptying hourglass for death, as a symbol of Extreme Unction. The hope of the Christian faith in the afterlife is reflected in “the representation of the bird escaping from the cage into the brightness of the skies.” A butterfly breaking free from its cocoon had a similar meaning. These examples reflect the role of symbols in handing on the truths of the tradition to the next generation. This combines their educational and religious roles.

It is often said that the internet age is an image-based age. This provides a tremendous opportunity for teaching the faith. In addition, Symbols in the Church provides a memorable resource for Catholic apologists. The authors a persuasion in their demonstration of the deep connection of symbols to Catholic beliefs and practice. Given that this book was originally published nearly a hundred years ago, and that Kansas City-based Romanitas Press seems to have left it untouched, Symbols in the Church itself provides a glimpse into the Catholic past. The book is therefore not only highly informative about so many things that were central to our faith only decades ago. It also provokes a sense of longing for the rich Catholic culture that has been left behind—a culture that included an awareness and use of symbols we supposedly no longer need.