Readers seeking out an existential horror story might not look to Catholic authors and a Catholic publishers. But that is precisely what Fiorella De Maria and K.V. Turley have delivered in This Thing of Darkness, published this week by Ignatius Press, which is a unique fictionalization of the life of iconic horror performer Bela Lugosi. 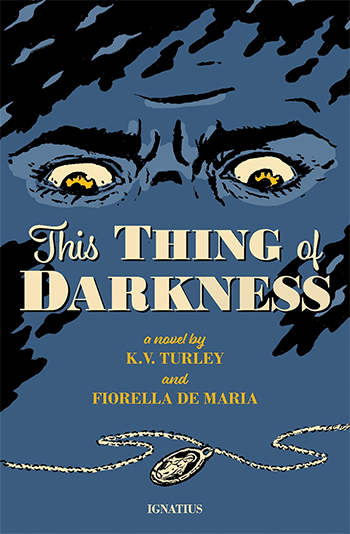 This Thing of Darkness follows a troubled young British widow who is living in the United States and trying to scrape out a living as a journalist, while simultaneously struggling with her own internal demons. After reluctantly accepting an assignment from her editor to interview a man about whom she knows nothing and for whose profession she has little regard, Evi finds herself thrust into a tale that she can scarcely believe.

It’s difficult for readers to find a modern literary foray into horror that scratches the itch to get spooked without being full of superficial themes and two-dimensional, lustful “romances”. There are very few authors are bold enough in our secular age to name the one and only true Remedy to evils both large and small.

Fiorella De Maria lives in Surrey, England with her husband and children, and has published several other novels, including We’ll Never Tell Them, Poor Banished Children, Do No Harm and three Father Gabriel mysteries. She has a Master’s in Renaissance Literature, and has been awarded the National Book Prize of Malta for her book The Cassandra Curse.

K.V. Turley is a London-based writer, journalist, and filmmaker. He is also a podcast, radio, and television host. K.V. is the UK correspondent for the National Catholic Register, as well as a regular contributor to EWTN.

In This Thing of Darkness, the authors guide the reader along as Evi slips ever closer to madness and the potential loss of her very soul. Strong parallels are drawn throughout between the real horrors of the human condition and the existential horrors that audiences have sought in popular entertainment for centuries. There is a potential for romance, but it is handled in a tasteful and realistic fashion.

CWR: Was there any particular reason that you decided that you needed/wanted to tell this particular story right now? Why did you want to write on Bela Lugosi?

Fiorella De Maria: Kevin initially brought the story of Bela Lugosi’s life to me. I have to admit, I had never had any interest in horror films before Kevin told me about Lugosi and I had never even heard of the actor or his iconic role.

It was mainly because I am a bit of a sceptic that we created the characters of Evi and Hugo, who approach the horror industry with a healthy dose of English skepticism.

CWR: How did you prepare for writing a fictionalized account of a real person’s life? Was there any part of Bela Lugosi’s history aside from his iconic Dracula role that inspired the directions that you went? Were any of the other characters inspired by real people from history or from your own life?

Fiorella De Maria: Kevin spent years meticulously researching Bela Lugosi’s life and the history of horror films, from their origins in Germany to the migration of many of the leading players to Hollywood.

I researched the Second World War and the Korean War, as the events of the novel are played out against the backdrop of the very real horrors of warfare. I read about some truly heroic men who fought and died in Korea (a war about which I knew little before beginning my research) and, as with the men who fought in the Second World War, I was struck by the understated heroism of the men involved. They were born at a horrific time in history and suffered a great deal but seemed to take it in their stride. As my husband’s grandfather put it, ‘we just got on with it.’

CWR: Some of the themes in the story are oriented around the brutality of war on the human body and spirit, as well as the popularity of brutal storytelling of the horror genre of the early 20th century. Was there a particular experience for either of you that inspired parallels between these two worlds?

Fiorella De Maria: I have always been interested in the experience of women in wartime and it was natural to me to create a character like Evi who loses everything as a result of war – her home, her country, her family and then the American husband with whom she had hoped to start a new life. It is not unreasonable, therefore, that Evi finds the horror genre offensive and silly, as she is living in a very real horror story of her own, tormented by the violent deaths of her loved ones.

Speaking entirely personally, I am interested in the way in which people are drawn to – and at the same time, terrified by – horror figures like Dracula and the Frankenstein monster, when the real monsters who commit horrific atrocities in wartime look like you and me. Hence Bela’s comment to Evi during one of their interviews, that the soldiers who killed her husband probably looked very smart in their uniforms.

CWR: Throughout the story, you leave a lot of choices up to the reader about whether the tale is supernatural or psychological. For each of you, what do you choose to believe? Do you feel that Evangeline is a reliable narrator despite her own personal issues that she is working through? Or do you think her own life and experience have colored her perception of the events that transpire?

Fiorella De Maria: Now that would be telling…

CWR: How did the two of you decide to work on this project together? Had you worked together before? Could you outline a little bit of what your collaborative process looked like?

Fiorella De Maria: We have worked on numerous creative projects before, including radio plays and now a screenplay but co-authoring a novel is a very different process. We spent hours discussing and developing the interweaving storylines and the novel went through more drafts than would have been the case if I had been writing alone.

We very much had our own creative areas. Kevin provided most of the material on Bela Lugosi, I developed the characters of Hugo and Evi, but Christy Kilhooley, the Irish-American soldier, was very much a joint creation.

CWR: All of the major players in the story have their own demons – literal and figurative – to face down, and although it is subtle, it is clear that the resolution that they all need lies within the arms of the Catholic Church. Have you had personal experiences that inspired you to describe dark descents followed by a divine experience with salvation?

Fiorella De Maria: I have had the privilege to walk with people who have fought battles with addiction, mental illness and who have struggled to find peace after suffering childhood abuse, all of which have influenced my writing. This is the not the place to go into a lot of personal experience, but as I grow older, I am more and more aware that demons can only ever be fought and defeated with the grace of the sacraments.

CWR: What made you decide to branch out into the horror genre? Do you think you’ll do more horror work in the future?

Fiorella De Maria: I would never have thought of going anywhere near this genre if Kevin had not led me there! Having said that, I was pleasantly surprised by how much I enjoyed writing a very different kind of book and I would not be averse to co-authoring another in the future.

About Zander Doby 4 Articles
Zander Doby is an average Catholic and a voracious consumer of literature. He lives in Western Oklahoma with his wife and their four lovely children.