“The culture of relativism is the same disorder which drives one person to take advantage of another, to treat others as mere objects, imposing forced labour on them or enslaving them to pay their debts. The same kind of thinking leads to the sexual exploitation of children and abandonment of the elderly who no longer serve our interests.” — Laudato Si’ 123

Anyone who provides caregiving for a loved one with physical and/or cognitive failings—such as dementia, neurodegenerative diseases, and on the list goes—will encounter uncomfortably familiar territory in Dr. Charles C. Camosy’s latest book, Losing our Dignity: How Secularized Medicine is Undermining Fundamental Human Equality. 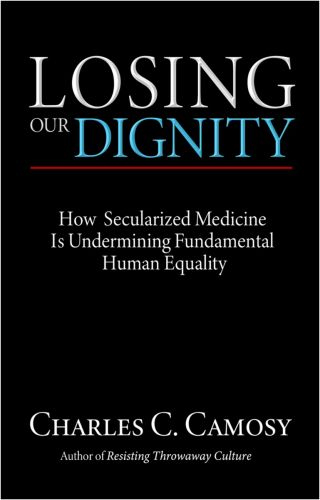 As a caregiver of a ninety-three-year-old mother with late-stage Parkinson’s, I could write a review with the word count of Dr. Camosy’s book. I know firsthand what it takes to advocate for a patient to sometimes overworked, sometimes uncaring medical professionals. I’ve had to use terms such as “basic human dignity” at doctor’s appointments and have taken other steps to remind a physician or nurse or physical therapist that my mom still has life in her.

Dedicated to his parents “who raised [him] … to see the same image and likeness of God in every single human being,” Camosy, a professor of theological and social ethics at Fordham University, is building on previous works that have also explored the practical interconnectedness of Catholic thought and morality—especially when it comes to how we as a people care for (or simply consider) the most vulnerable. His prior work, Resisting Throwaway Culture, looks at a broad array of topics, from abortion to the death penalty, in a way reminiscent of Pope Francis’s “everything is connected” eco-encyclical Laudato Si’.

Since then, COVID-19 dramatically exposed how many professionals and politicians care for and consider the elderly in nursing facilities as well as other dark realities of modern healthcare. On social media and elsewhere, Camosy has explored and highlighted horror after horror, ugly inequity after ugly inequity, that could no longer be hidden during a time of global pandemic.

In Losing Our Dignity, Camosy’s observation, which he backs up with case studies and his always crystal-clear analysis, is that the Western phenomenon of institutional medicine—born out of Christian duty (and grace) and lived out for centuries by religious communities, especially women religious—is of late increasingly failing to provide a critical element of care for a growing number of vulnerable human beings. This critical element is the Christian notion of human dignity, which has been lost with the disconnection of Christian thought (and grace) from Western academic and institutional practice.

In other words, we have lost much of that lesson that had been taught to Camosy by his parents: that the same image and likeness of God subsists within every single human being.

This Christian notion of caring for our neighbors (especially those in dire need) is expressed most eloquently by Benedict XVI in his encyclical Deus Caritas Est.

Going beyond exterior appearances, I perceive in others an interior desire for a sign of love, of concern. This I can offer them not only through the organizations intended for such purposes, accepting it perhaps as a political necessity. Seeing with the eyes of Christ, I can give to others much more than their outward necessities; I can give them the look of love which they crave. (DCE 18)

Similarly, Camosy’s point is clear. The decoupling of Western healthcare from its Christian roots has had brutal consequences.

In our post-Christian culture, especially (but not only) among some in medicine whose opinions are authoritative and influential, a focus on levels of ability relative to one’s autonomous will, self-awareness, rationality, productivity (especially as understood by a consumer culture that worships buying and selling), moral capacity, communication, and the like have led some to notice that not all human beings have these abilities in equal measure. Indeed, some fellow members of the species Homo Sapiens do not appear to have them at all. This helps explain why some of these thinkers have made a distinction between “human beings” and “persons.” In this view, persons (that is, those who exhibit the kind of relative abilities just mentioned) are indeed all equal. But not all human beings are equal. And not only that: in this view, certain human beings who are deemed non-persons may be classified as mere objects and discarded or even killed without significant moral or legal concern.

Ultimately, two words used by Dr. Camosy sum up where we’re at: curing vs. caring. The one letter difference is itself telling but more importantly is this question: What do we mean by “caring?”

Indeed, what moral foundation guides us to answer that question? Who or what are we caring for? And more simply, why should we care?

Losing our Dignity helps us explore such questions with an insightful, evidence-based, and thankfully hopeful look into how Western medicine once answered them, how they are answered today, and what we need to do to answer them well in the years to come.

That last point, “what we need to do,” is best answered, Camosy proposes (and I wholeheartedly agree) by understanding the “we” to mean “we Christians.”

Since the first days and decades of the Church, many, many Christians have given up everything to cure and care for the sickest and neediest among them—those that pagan societies were quick to cast aside. In response, a counter-cultural outpouring of Christian living—fueled by grace—changed human history and called into being the very presuppositions of much that is the modern Western medical establishment.

But as Camosy shows us in Losing Our Dignity—and as many of us have experienced with loved ones—it is reasonable to say that we find ourselves in a culture eerily similar to the pagan cultures that Christianity infiltrated, challenged, and converted.

As Dr. Camosy told Catholic Ecology more succinctly, “It is time for the Church to step up.”

The challenges today, then, that we followers of Christ Crucified face are not new to Christianity. Nor should be the response: that is, radical sacrifice and Christian self-giving so that we may care for those who today’s culture would so quickly cast aside.

Toward the conclusion of his work, Camosy ruminates on the potential—a mostly dormant potential—that exists within the modern Church to not only respond to the suffering around us but also to rekindle the fires of Christianity. It is perhaps the book’s most powerful moment (and hopefully the outline for a subsequent one). Indeed, the closing should inspire the reader and lead him or her to reflect on one’s own life and how well we as individuals, parishes, and dioceses are living the lives we ought in light of our baptisms.

For those who embrace the “everything is connected” wisdom of Pope Francis, Losing Our Dignity is a must-read.

(Editor’s note: This review was originally posted on the Catholic Ecology site and is reprinted here by kind permission of the author.)

About William L. Patenaude 35 Articles
William L. Patenaude MA, KHS has a master's degree in theology and is an engineer and 33-year employee of the Rhode Island Department of Environmental Management. His debut novel A Printer’s Choice, has been described as "a smart, suspenseful Catholic sci-fi novel, with a richly imagined fictional world."

Recently, Alasdair MacIntyre presented a talk on the theme “Human Dignity: A Puzzling and Possibly Dangerous Idea?” at the Fall Conference of the de Nicola Center for Ethics and Culture at the University of Notre […]

An incisive critique of the “tyrannous logic” of liberal democracy

It’s a commonplace to say that America, along with other Western countries, is currently experiencing a cultural—which is to say: moral—crisis. And, in some quarters at least, it’s hardly less common to say this presents […]

Truth, justice, and the mystery of evil

God’s unity and simplicity mean that for Him truth, justice, and power are all the same. He isn’t conflicted, doesn’t do half-measures, and never loses. The evident reality of falsehood and injustice makes that hard […]