It has long been the dream of tyrants and secularists that someday religion would pass away forever.

In A Printer’s Choice, W. L. Patenaude’s debut science-fiction novel, the architects of the future have tried to make that dream a reality. But as Patenaude proposes, the Church will not only endure: it will also stubbornly bring the Gospel of Christ even to the farthest frontiers of space. 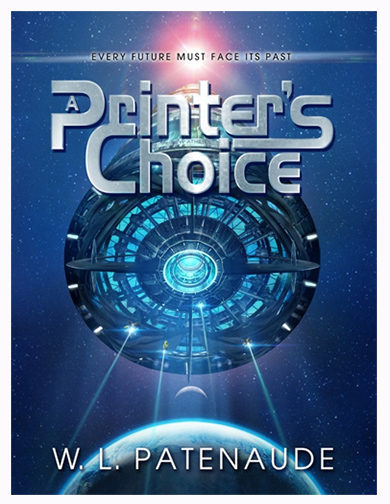 The novel begins in 2088, with Earth picking up the pieces after decades of global disasters: famine, nuclear attacks, and a bloody world war with the fanatical Soldados de Salvación, or “Soldiers of Salvation”. Led by a Mexican Catholic cartel boss claiming to have visions of St. Michael the Archangel, the Soldados or “Sals” quickly grew into a vast army of zealots. Using intimidation, mass extermination, and the language of Catholicism as their weapons, the Sals had nearly overrun the world. After their defeat, these militants have watched and waited for their moment to return to power.

Meanwhile scientists known as “Engineers” have attempted to begin again with a space colony called New Athens. All inhabitants aboard this cylindrical metal station live under the “New World Agreement,” which prohibits the public practice of religion. It will be a modern technological utopia, peaceful and free from what one character calls “the primitive impulses” of man.

But when New Athens suffers its very first murder, and the victim turns out to be an undercover Catholic priest, the secular authorities turn to the Catholic Church back on Earth for help with solving the crime. Enter Fr. John Francis McClellan, retired Marine, former Military Police, and a programmer who once worked with machines known as “printers.”

Indeed, these printers become central to the story—and one of Patenaude’s most imaginative creations. In this vision of Earth’s future, artificially-intelligent 3-D printers can harvest and transform matter and energy into anything at all. They are sentient, intelligent beings, but their programming deliberately restricts their free will to keep them at the service of humans. The key to solving the murder lies hidden inside the consciousness of one of these powerful machines. While the threat of Sal infiltration grows, the fate of New Athens, of the printers, and indeed of Christianity in space may depend on Fr. McClellan’s success.

Whether or not man will ever create true artificial intelligence (a debate we can leave to the philosophers and theologians), the novel does raise some compelling questions. Can something be programmed to have free will? Once an artificially-intelligent being exists, could it be saved? How will man relate to creatures like this?

More powerfully, Patenaude uses computer science and artificial intelligence as an analogy for God’s relationship to His creations. God is the “Original Programmer” who “programmed the original laws” of nature. Mankind has “programming” (natural law) but because we also have free will, we “can follow this programming or disregard it.” The Fall has left us with “damaged programming” that makes it harder for us to choose the good. For Patenaude, what the human being requires is “a higher level of programming that can repair the embedded flaw. . . that can replace the damaged code.” The Catholic Church, as the novel’s author well knows, would call that “grace.”

It’s a daring analogy, but a brilliant one. God created human beings to function best within certain physical and spiritual parameters; but He gave us free will by which we can either accept or reject those parameters. Patenaude’s analogy sharply addresses not just the evils that distort the world but also the nature of individual sin. On the one hand, we daily face ideologies, cultures, and governments that try to reprogram or even unprogram the basic physical and spiritual traits of the human species: our two sexes, our familial bonds, our inherently religious nature. On the other hand, our evil actions—even our private ones—violate the internal code of our own human nature. Christ’s teachings, such as the Sermon on the Mount, can be understood as the new coding by which the human being, once empowered by divine grace, can live.

Patenaude has crafted a smart, suspenseful Catholic sci-fi novel, with a richly imagined fictional world. Like his predecessor the great Frank Herbert (author of Dune), Patenaude creates fictional primary documents—histories, papal writings, etc.—that give texture and depth to this not-so-distant human future. An engineer by trade, he writes believably about futuristic tech; but he also has a graduate degree in theology, and the novel shows a great understanding of the Church and the doctrines of the faith. We can forgive the author if the novel’s politics are a little hard to follow, as Patenaude depicts the various factions and governing bodies in Earth’s future. And the novel has occasional flat characters such as the young Chrissy and Jack, who nobly refuse to cohabit before marriage, but who seem to be in the novel mainly to make that point. Yet the novel grabs our attention from the first page, and delivers a suspenseful whodunit set in the chilled darkness of outer space. There are rumors that the novel could be the first in a series, and we certainly hope those rumors are true.

Finally, Patenaude’s knowledge of Church history informs his vision of the Church’s future. In the author’s depiction, Father McClellan actually becomes a new St. Paul, on mission to the Gentiles in an expanding empire: the cities of New Athens include biblically-resonant places like “Philippi” and “Corinthia.” This follows logically from the Church’s divine task, for when Christ commanded the Apostles to “Go, therefore, and make disciples of all nations,” He never specified that those nations would all be on the planet earth. In Patenaude’s exciting Christian sci-fi novel, the Church will survive, and will bring the Gospel anywhere that the Spirit leads.

(A Printer’s Choice will be released on August 28th and is currently available for pre-order.)

Pope Francis met with members of the Society of Saint Paul on June 18, 2022. / Vatican Media

Fr. James Martin, “bridges”, and the triumph of the therapeutic mentality

“There is an organic connection between our spiritual life and the dogmas. Dogmas are lights along the path of faith; they illuminate it and make it secure. Conversely, if our life is upright, our intellect […]