Kevin Wells’ career as an award-winning journalist and writer has led him to some varied work, from a focus on Major League Baseball at the Tampa Tribune to priestly biographer. His latest book is Priest & Beggar: The Heroic Life of Venerable Aloysius Schwartz (Ignatius Press, 2021). 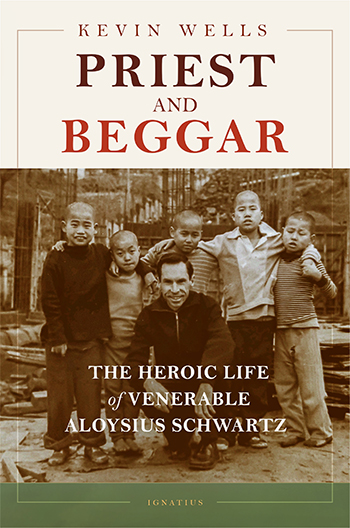 Father Al, as he was called by many, was a tireless man, a profoundly holy and hard-working priest dedicated to serving the poor and marginalized. A native of Washington, D.C., he spent his priestly life in South Korea following the Korean War, and in the Philippines and Mexico, founding and reforming orphanages, hospitals, hospices, clinics, and schools. He also founded the Sisters of Mary, a religious order dedicated to the sickest and poorest. Even when he was diagnosed with Lou Gehrig’s Disease, Father Al continued his tireless work, and the ripple effects of his ministry continue to this day, and will surely reach far beyond.

Father Al’s story is a profound one that challenges us to ask ourselves: What am I doing with my life? How can I better live the gospel every day?

Wells recently spoke with Catholic World Report about Father Al, his ministry, and how we can learn from his exemplary life.

Catholic World Report: How did the book come about? What prompted you to write this book?

Kevin Wells: In 2019, in the aftermath of writing The Priests We Need to Save the Church, a married couple, Tom and Glory Sullivan approached and said, “We know who that priest is—Aloysius Schwartz, and we’d like you to consider writing his biography.”—and they handed me some reading material.

I am from the Washington D.C. area, and over the years I’ve heard about this great missionary priest from DC, but I didn’t know much about him. But after understanding his holiness and weight, I became fascinated by his life. What he accomplished seemed astonishing to me.  I had researched the lives of the great priest-saints prior to writing The Priests We Need—Vianney, Kolbe, Damien the Leper, Bosco, Neri, etc.—and what I learned of Father Al I had never read.

Outside the finger of God, what he did for the humiliated and the orphan simply could not have happened. What he managed was incomprehensible. Fr. Joseph Fessio from Ignatius Press agreed.

CWR: This is not your first book, but it is your first biography. How was the writing process different for a biography?

Wells: The timing was ideal to write my first biography. I had just read a handful of bios on the titans of the Church—the great priest-saints—to prepare for my last book. What captured my imagination, and what didn’t, was fresh in my mind.

When I was a sports writer, an editor told me, “Kevin, there are only two secrets to writing—‘get it right and keep them turning the page.” Because Father Al’s priesthood was that of a superhero from out of the pages of a comic book, he made things easy for me. His heroism got the pages turning; I was just a guy hanging onto the back of a tiger and ducking tree branches. Writing a biography demands research, reporting, visits to childhood parish, home, etc.—which thankfully I was trained to do as a journalist. Writing about Father Al was like writing about a Sonny Liston fight or of Ted Williams’ dropping bombs in Korea and coming home a war hero—and then hitting .388 for the season.

CWR: What drew Fr. Schwartz to east Asia? Why did he desire to work there, in particular?

Wells: Father Al wanted to bring Christ to ruined places, where the poorest of the poor were dying on the side of the road. He wanted to be the guy cleansing the sores of the leprous with a smile and kind word. In 1957, he found that place in post-war Korea. He was told by his Belgian formators that war-scorched South Korea was like a dystopian novel, so he wanted to begin his priesthood there after ordination. He felt strongly that Our Blessed Mother wanted him to set up shop among the most humiliated and abandoned. He wanted to bring the forgotten orphan into places of love.

CWR: Fr. Schwartz is one of those tireless folks—it’s hard to fathom just how much he accomplished in his life. What drove Fr. Schwartz to work so tirelessly?

Wells: Father Al consecrated his priesthood to Mary under the title of “The Virgin of the Poor” or “Our Lady of Banneux.” He had met her at her obscure, approved apparition site in Banneux while studying at the University of Louvain. He vowed to her that he would never take a day off from serving the societally rejected. More practically, he was an athlete in extraordinarily good physical condition. He ran as many as five to seven miles each day of his life. He was able to work 16-18 hours days in the way we work eight.

Also, because he had encountered unnumbered poor and orphaned, he simply didn’t have time to rest. He had been given a fortune in American donations and felt an urgency to keep building humble kingdoms of care, healing and resurrection.

CWR: How did he react to his diagnosis of ALS (“Lou Gehrig’s Disease”)? Did it significantly slow him down?

Wells: Because he knew he only had three years, he vowed to Mary that he would work harder. He left the Far East and traveled to Mexico. He heard crushing poverty was causing Mexicans to leave the faith, and he wanted to succor Our Lady of Guadalupe. So he built a Girlstown in Chalco while leaning on a cane, which was eventually traded for a wheelchair. He knew he would fade away and die in Mexico. His decision to work harder while in the throes of ALS paid dividends; after his death in 1992, the Sisters of Mary (the religious community he founded in 1964) took hold of the baton and opened up Boystowns and Girlstown communities in Central and South America and in Tanzania.

Today, more than 20,000 children and 400 sisters are the spiritual heirlooms of Father Al. Father Al could have easily and understandably said No to extend his missionary work in the West with his ALS diagnosis, but because he said Yes to Mary tens of thousands of children were saved and brought out of abject poverty in the Western hemisphere.

CWR: Father once said, “Our role is to mingle our blood with the blood of Christ, and to shed our blood with that of Christ to the poor. … The way we serve is to have a constant crown of thorns.” How did Fr. Schwartz live this out?

Wells: From a very early age, he wanted to live the same poverty as Christ; he knew serving the poor without living poor would only go so far. He wanted to know and live the agony of Christ stretched out on the cross, where he would give his blood, to give all. He had no comforts; he moved into a condemned shack for five years, despite hundreds of thousands of dollars from American donors—because he hungered for the austerities of the great desert fathers, hermits, monks and suffering saints. Like John the Baptist, he wanted to annihilate every measure of comfort before heralding the Gospel. Father Al was a radical; all saints, of course, are. He didn’t make sense to most who met him.

He once wrote, “Christ himself was marked by the sign of poverty. He was born under it, lived under it, and died under it. The historical Christ chose to be poor and a concomitant fact is, his disciples have no choice but to follow.”

CWR: What can people learn from Fr. Schwartz today? In other words, why should we care about his story?

Wells: His story is vital, especially for today. To begin, I believe he will be canonized soon. He was around when Michael Jordan was playing basketball. Practically, though, his story is most important for perhaps this reason: he made a decision to die to himself each day to save the poor. He knew Mary would work through him if he remained poor and hard-working. He was no social justice worker. He prayed three hours each day, was deeply Eucharistic, and mortified his senses through penances. Hundreds of thousands of bodies and souls were saved because he amputated every measure of comfort.

Today’s Catholic Church may be imploding in the west because too many bishops and priests have seemingly settled for the opposite. Opulence, comfort, and administrative work does nothing to heal and save souls. A priest is ordained to save souls. Father Al died to himself each day of his priesthood and saved generations of souls.

Wells: Father Al’s mission to save the poor and grow the Catholic Church continues today; in fact, nearly three decades after his death, it may be stronger than ever. More than 170,000 teenage children have been educated, catechized, nourished and cared for at fifteen different Boystown and Girlstown communities throughout the world. In a certain way, these communities are helping to save a battered Catholic Church. The Sisters are bringing Lazaruses from their tomb of poverty and devastation, mothering them back to health, and sending them out five years later as bright Alleluias of Catholic hope. In researching Father Al’s life, I’ve spent more than a month in these communities and I know of no greater and more necessary mission today to help heal and restore the Catholic Church.

I urge readers to learn more about Father Al’s mission and today’s mission of the Sisters of Mary by visiting WorldVillages.org.