Jonathan Huener’s new study The Polish Catholic Church Under German Occupation: The Reichsgau Wartheland, 1939-1945 is a valuable addition to the discussion on the relationship between Nazism and Christianity. The book’s impact is occasionally limited by its author’s bowing to some aspects of political correctness that dominate in today’s academia. Nonetheless, it is a powerful account of how Nazi Germany pursued a ruthless policy of immense corporal and material damage to Polish Catholicism in the Warthegau, the territories of western Poland that were directly annexed by the Third Reich, yet failed to extinguish the faith of many Catholics, laity and clergy alike, who lived there. 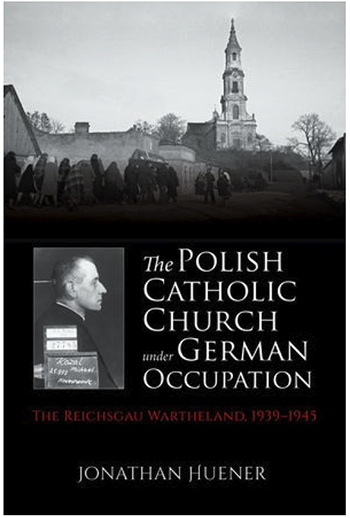 After Nazi Germany had invaded Poland on September 1, 1939, thus precipitating the outbreak of the Second World War, it divided the country into several administrative units. The bulk of central, southern, and—after Nazi Germany’s invasion of the Soviet Union 1941 (thus bringing areas that had been under Soviet occupation since 1939 under its jurisdiction)—southeastern Poland became the General Government, a colonial territory, governed by Hans Frank. Frank, who was Hitler’s sadistic and corrupt (the GG was nicknamed Gangster Gau) personal lawyer, brazenly made Krakow’s Wawel Castle, the residence of Polish monarchs for centuries and a shrine to Polish nationhood that is dear to the heart of every Pole, his home.

Meanwhile, the remaining regions of northern and western prewar Poland, to which the Germans claimed to have historical rights, were turned into Gaus, or administrative units of the Third Reich. The policies of Germanization were most brutal there. Among them was the Reichsgau Wartheland or Warthegau, which consisted of the bulk of Greater Poland and the Lodz regions.

The Gauleiter of the former territory was Arthur Greiser, an ethnic German from Greater Poland known for his pathological hatred of all things Polish, Jewish, and Catholic. Poles under his rule dubbed him Potwór (“The Monster”). When he was tried by the Polish state for war crimes and hanged in Poznan in 1946, thousands of Poles gathered to watch with glee, as if the execution were a sporting event.

Germany’s historical claims to what would comprise the Warthegau were problematic, for not only did Germans make up a small fraction of its total population (just 325,000, compared to 4.2 million ethnic Poles and 400,000 Jews), but in fact Greater Poland was the cradle of the Polish state in the tenth century (Gniezno, which found itself within the Warthegau, was the first Polish capital). Thus, to Germanize the region, Greiser resorted to brutal persecutions and forced deportations of Poles and Jews from their homes to the General Government.

The Warthegau was considered the Mustergau, or “model Gau,” where the German Nazis would test many policies they would implement in other parts of occupied Europe. For instance, the Fort VII concentration camp in Poznan was the first place were Polish and Jewish psychiatric patients were gassed, while the village of Chełmno nad Nerem, renamed Kulmhof, became host to the first extermination camp; there, up to 200,000 Jews were killed in gas vans.

The Warthegau was also the testing ground of Hitler’s Kirchenpolitik, or Church policy. Nowhere in Nazi-ruled Europe, however, would casualties among the clergy prove to be so high: throughout the war, three-fourths of Warthegau priests were interned in prisons as well as forced labor and concentration camps. Meanwhile, Huener notes that the death rates among Catholic priests in the four dioceses within the Warthegau (Poznan, Gniezno, Lodz, and Wloclawek) amounted to 35, 37, 38, and over 50 percent, respectively (with regards to the Wloclawek see, Huener simply writes that “more than half” of the Catholic clergy died without giving a more precise number).

This means that in twentieth-century European history, German-occupied west-central Poland was, alongside the excesses of the Spanish Civil War and Stalinist regimes in various East European countries (the cruelest of which was Hoxha’s Albania), the bloodiest episode of the martyrdom of Catholic clergy.

Drawing on quantitative and qualitative research in Polish, German, and English from both archives and secondary sources, Huener does not limit his study to solely documenting the killings of Polish priests, most of which happened in the Dachau concentration camp. The murder of well over a thousand priests from across Europe (the overwhelming majority of whom were Poles) has already been chronicled in two other excellent books, the Luxembourgish priest Jean Bernard’s memoir Priestblock 25487 and Guillame Zeller’s The Priest Barracks: Dachau, 1938-1945, as well as in German filmmaker Volker Schlöndorff’s fine drama The Ninth Day. Huener does devote a chapter to chronicling the martyrdom of Polish priests in Dachau, but he also discusses the social implications of these policies and other repressive measures.

Apart from the incarceration and killing of priests, the German authorities made access to the sacraments extremely difficult for Poles in the Warthegau. Mass could be celebrated only between the hours of 9:00 and 11:00 on Sundays, while 97 (sic!) percent of Polish parishes were closed; many were converted into secular purposes, such as warehouses or prisons for Jews about to be deported to camps.

Huener notes that this policy had a diverse impact on Polish lay Catholics in the area. Some grew religiously apathetic, while others, on the contrary, grew in their faith (a reminder of Tertullian famous observation that the blood of martyrdom is the seed of the Church). Huener’s study is yet another historical example of how every political force that ever wanted to conquer the Polish nation tried to destroy its faith.

An additional strong point of Huener’s study is his discussion of the incarceration of hundreds of Polish nuns in the Bojanowo slave labor camp, which he notes is overlooked even in the Polish historical literature.

In the mid-2000s, as “new atheist” books by such authors as Richard Dawkins, Sam Harris, and Christopher Hitchens became international bestsellers, Adolf Hitler suddenly became a prominent figure in the West’s culture wars. The “new atheists” argued that the German dictator was a baptized Catholic from historically arch-Catholic Austria and underlined that he occasionally made public references to God and photographed himself with churchmen. Their Christian detractors, meanwhile, argued that Hitler was in fact an atheist or, at best, a neo-pagan.

In my opinion, Richard Weikart’s book Hitler’s Religion, which I reviewed for Catholic World Report a few years ago, should settle this question for good. Weikart convincingly argues with great erudition that Hitler was an ex-Catholic who hated Christianity and did, in fact, believe in God—but in more of a pantheistic, Spinozan deity.

Realistically, however, the debates on the relationship between the Cross and swastika will not end anytime soon, not in the least because the Third Reich’s policies towards religion were wildly inconsistent. As Huener notes, for instance, in Slovakia a fascist puppet government was led by none other than Monsignor Jozef Tiso, a Catholic priest. Meanwhile, the regimes in Vichy France and Ustaše Croatia explicitly invoked Catholic imagery and values (although it must be remembered that in all three countries there were numerous priests and bishops who resisted Nazism).

Through its portrayal of the extreme cruelty towards the Polish clergy in the Warthegau, Huener’s book convincingly demonstrates that claims that the Third Reich was cozy with the Catholic Church are simply ideologically driven fantasies. Furthermore, a key element of Christian teaching is that salvation is offered to all peoples, regardless of race or citizenship, while Huener details how the Nazi authorities of the Warthegau enforced strict racial religious segregation (a German who attended a Polish Mass there faced deportation to a concentration camp). Reading this work leads to the conclusion that Arthur Greiser must rank alongside Nero and Stalin as among history’s bloodiest anti-Christian bigots.

Some of the best-known religious resisters to Nazism are German Lutherans such as pastors Dietrich Bonhoeffer and Martin Niemöller or Hans and Sophie Scholl. Their courage and moral rigor must be remembered, as should the persecutions of resistant Protestant clergy by the Reich. Nonetheless, Huener’s book demonstrates that in occupied Poland, by far the greatest persecutions befell the Catholic Church.

Huener argues that the ruthless policies of the Warthegau’s Kirchenpolitik occurred at the intersection of its masters’ anti-Catholicism and anti-Polonism. He notes, for instance, that there were two Lutheran Churches in the region: one whose membership was primarily German and the other which was predominantly Polish. The former Church went through the war largely unmolested, while the other experienced substantial losses, but not to the degree of the Polish Catholic clergy.

While overall an important contribution, Huener’s work does at times get burdened by the politically correct approach to writing about Christianity that dominates in the Western secular ivory tower today. For instance, when referring to the Catholic Church, he consistently writes “the church” with a lowercase “c.” The standard convention in written English has been to use this term in lowercase when referring to a church building. There has been an irritating tendency in recent years to keep it lowercase when mentioning the Church as an institution. (For the record, as a Catholic I have no problems with writing about, say, the Anglican Communion or the Southern Baptist Convention as “the Church.”)

Likewise, when noting that of 1,200 Polish priests at Dachau, only two or three signed the Volksliste, which allowed Poles with partial German ancestry to receive preferential treatment, he argues that we should not romanticize the behavior of the Polish clergy at the camp, noting, for example, that relations between Polish and German priests in the barracks were often hostile. “The behavior of the clergy in Dachau was at times less exemplary than has often been portrayed,” Huener writes.

I visited Dachau in the summer of 2018. I saw how inspiring the devotion of Polish priests interned there was to the Eucharist and the sacraments; on display are the monstrances and rosaries they made of the very primitive materials available to them. There is nothing wrong with explicitly saying that the Polish priests at Dachau were courageous witnesses to the faith.

With respect to Huener’s other argument, given the German immense destruction of Poland during the war, would the distrust of German inmates by Polish ones not seem natural? This passage comes across as if Huener were taking great efforts to ensure that the reader does not see him as too pro-Polish or pro-Catholic.

Nonetheless, The Polish Catholic Church Under German Occupation is an important contribution. In Poland, the sufferings of the country’s priests and nuns during the war are fairly well-known; in 1999, Pope St. John Paul II beatified 108 Polish martyrs of World War II, and there are plenty more cases under study in the Congregation for the Causes of Saints (for example, the cause of the Ulma family, killed for harboring Jews, is making progress in Rome).

Huener’s work sheds light on a topic little-known in the West, where cliches that the Polish Catholic Church was inherently anti-Semitic (never mind the fact that it was a Polish pope who did more than any other to build bridges between Catholics and Jews; stereotypes are often impervious to facts) and even compliant with Nazism (as the late Hans Kung, for instance, has audaciously but stupidly claimed) persist.

Washington, D.C. Newsroom, Aug 7, 2022 / 04:40 am (CNA).
Twelve Polish pilgrims bound for Medjugorje were killed Saturday when their bus crashed into a ditch, authorities said. Another 31 people were injured, some… […]

Married couples from across Europe pray at Marian shrine in Poland