It is easy for a Catholic to feel discouraged in our times. The culture appears to have decisively turned against Christian values and shows signs of constantly getting worse. In this context, Austin Ruse’s new book, titled Under Siege: No Finer Time to Be a Faithful Catholic, is an inspiring call to arms. 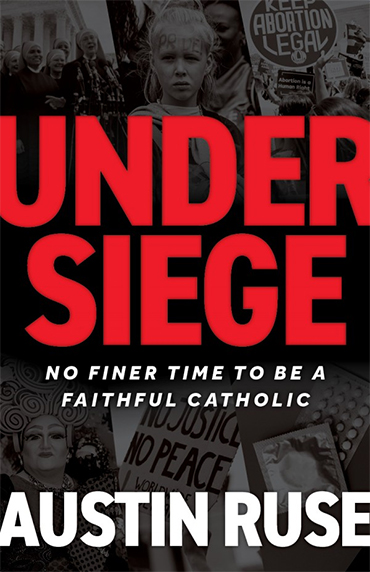 Ruse argues that we should be glad to live in such troubled times because of the opportunity they provide to become saints. Ruse summarizes his book’s thesis in the following way:

In His great providence, God has allowed a great evil to come upon our land. But He has also sent us, in His great providence, to do something about it. What an honor that is, an honor that we should accept. We should not accept that the situation is lost; we should not hunker down and wait for better days. We are the Lord’s hands and feet on this earth, and better days rely upon us. We must charge the sniper’s nests now lodged in the government, the academy, the corporations, the media, Hollywood. We must charge with joy in our hearts that this is the mission that He gave to us.

However, if we are to engage in this titanic battle, we must understand the nature of the evils that we face. Ruse paints a grim picture of the state of our times. One the chief evils is ‘transgenderism’,  which Ruse describes as follows:

At its base, the idea is that God or nature made a mistake with some people and gave them the wrong reproductive organs. But on top of that is piled the assertion that the failure is not actually God’s, or nature’s, but rather ours for failing to perceive this unusual color of the rainbow.

The trans movement has increasingly targeted children, and clinics have prescribed ‘gender confused’ adolescents with puberty blockers and other body altering medication. In some US states, taxpayer’s money now funds sex change operations for those as young as 15. Ruse cites the particularly tragic case of six-year-old James Younger ‘who is being forced by his mother to wear dresses as a girl named Luna’:

When he is with his dad, James is all boy. He chooses boy clothes and boy toys. But the mother has custody, and so James is being pushed toward puberty blockers, cross-sex hormones, and perhaps surgery. The boy’s father went to court to fight what was happening to his son. The court sided with the mother. Now the father is required by court directive to refer to his son as a daughter and to use his female name and pronouns. If he refuses, he will lose all contact with his son.

Sex education and pornography have also become huge problems. Ruse describes how his own local school board in Fairfax County, Virginia ‘requires children to experience eighty hours of sex ed’:

The family of pornographic websites known as MindGeek makes more money than Netflix and has a greater bandwidth than Facebook or Amazon.

Then of course there is abortion. While there has been a massive increase in the number of Americans who describe themselves as pro-life, now equalling those who call themselves pro-choice, and more than 200 pieces of pro-life legislation have been passed by state legislatures, perhaps in reaction to this the abortion lobby has now dropped all pretense of being ‘pro-choice but not pro-abortion’. Groups like Shout Your Abortion now openly celebrate the practice and the National Women’s Law Centre describes abortion as “an act of love, an act of compassion, an act of healing, an act of selflessness.”

Ruse traces the development of what is known as America’s ‘wall of separation’ between church and state. In American terms, secularism meant a belief in religious pluralism but today it has come to mean being without religion. In the 1960s the Supreme Court imposed this latter form of secularism on America, banning prayer and Bible reading in public schools. Subsequent Supreme Court decisions have enshrined contraception, abortion, sodomy, and same-sex marriage as constitutional rights.

The numbers of Americans who describe themselves as Christian has declined from 90% to 65% since the 1970s and there has been a dramatic rise in those who declare themselves as having no religion from 7% to 22%. Yet Ruse argues that we do not in fact live in a secular age and that even the ‘nones’ are profoundly religious. Practices like Yoga and concepts such as ‘wellness’ have taken on a strongly religious nature. There has been a massive increase in belief in reincarnation, ‘spiritual energy’ in physical things, psychics, and astrology. One study found witchcraft to be America’s fastest growing religion. During the Brett Kavanagh hearings a group of witches gathered to cast a spell on him, and 10,000 people registered for an event called ‘Hex Kavanagh’.

While the decline of Christianity has led to an increase in occult and New Age spirituality, the new secular religion which Ruse calls ‘the State Church’ is as dogmatic and intolerant as any other. One of its chief dogmas is that of LGBT rights, to dissent from which risks personal and professional exclusion. The LGBT agenda has penetrated every area of life from education to the military to corporations. The LGBT movement has a massive hold over wealthy corporations. 10% of top executives at J P Morgan Chase bank define as LGBT. The movement has infiltrated the human resources departments of major corporations and their philanthropic arms which donate hundreds of millions of dollars to the cause. Ruse describes how the big corporations have become beholden to the leading LGBT organization, the Human Rights Campaign (HRC):

When Big Gay winks, corporate America smiles. More than 1,000 corporations have voluntarily participated in the HRC questionnaire, including almost all of the Fortune 500. Fully 91 percent of the Fortune 500 companies have gender-identity protection enumerated in their nondiscrimination policies, and 98 percent of those businesses offer such protections. Eighty-nine percent of reporting businesses offer “sex-change” coverage. Indeed, 686 of the companies reporting, or 64 percent of the total, have achieved a score of 100 percent.

What happens when all of corporate America gets a 100 percent score on the HRC’s Equality Index? Will Big Gay organizers go quietly back to their lives? Unlikely. Power is attractive, and there’s always more to do, more pockets to pick, more heretics to harass. The HRC owns a spectacular building in downtown Washington, D.C., only a few blocks from the White House. They bring in fifty million dollars a year. This gay cash does not grow on trees. It is shaken out of scared individuals and major corporations who originally paid protection money for peace but now are genuinely committed to the gay agenda.

To avoid falling foul of the censors of the new religion many people simply self-censor. Self-censorship has become particularly strong on university campuses where bad ideas often have their origin. Ruse cites the results of a study on self-censorship at one university:

In 2019, researchers studied free expression at the University of North Carolina at Chapel Hill. They asked students “how many times during the semester they kept a sincere opinion related to class to themselves because they were worried about the consequences of expressing it.” Surprisingly, they found that even 23 percent of self-identified liberals self-censored; 68 percent of self-identified conservatives self-censored.

Yet despite so many terrible problems afflicting our society, Ruse argues that today is a great time in which to live. We are living through the one of the greatest debates of all time, one that concerns the very nature of the human person. Ruse believes we should feel privileged to live through this debate and future generations will ask us what we did.

Ruse sees three barriers to decisive action: fear, nostalgia, and entertainment. There are constant temptations to hide ourselves away from the danger, to long for a time that is long gone or to engage in long and pointless arguments about forms of society that we would like to see implemented but which are highly unlikely to materialise. Finally, there is an inclination to lose ourselves in entertainments, social media, and other escapes from reality.

Ruse believes we should take heart from the fact that the Church has never compromised on marriage and family. He states:

Consider…that abortion, contraception, and sexual perversion are all sacraments of the sexual Left, and now of the established State Church. The Catholic Church stands against all of them.

The United States has several excellent Catholic publishing houses, TV and radio stations, and universities. While vocations may be down, they are up in traditional orders such as the Priestly Fraternity of St Peter and Institute of Christ the King. Many orders of nuns that retain the habit and are faithful to Catholic teaching are oversubscribed.

Ruse gives practical suggestions as to what a Catholic can do to oppose the dominant culture. He says Catholics should not speak the enemy’s language, for example, avoid words like ‘gender’ and use ‘sex’ instead. You can donate to pro-life or pro-family groups, let friends and family know your views and remove your children from public school and let people know why.

This is a useful book in describing the evils of our times and what we can do to oppose them.

Under Siege: No Finer Time to Be a Faithful Catholic
by Austin Ruse
Sophia Institute Press/Crisis Publications, 2021
Hardcover, 208 pages

About Piers Shepherd 9 Articles
Piers Shepherd is a freelance writer based in London, England. He has had articles published in the Catholic Herald, Christian Order and the Catholic Medical Quarterly among others. He obtained an MA in Theology and Christian Ministry from the Franciscan University of Steubenville and currently works as a researcher for a trust defending traditional marriage and family in the UK.