In January of 1994, then-Vice President Albert Arnold Gore Jr., while speaking to the Institute of World Affairs in Milwaukee, committed one of his best known linguistic faux pas. While praising the diverse character of Milwaukee’s ethnic communities, Vice President Gore mistranslated the traditional motto of the United States, “e pluribus unum”, as “out of one, many” (the correct translation is “out of many, one”). The original 1776 motto, of course, signified that out the original 13 colonies one nation was formed. 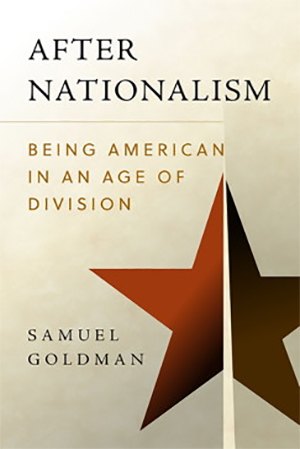 Less well known is that the motto also signifies the six founding stock nations of the United States: England, Scotland, Ireland, Holland, France, and Germany. The reality that Irish and Scottish settlers were among the first Europeans to settle North America along with the English is common knowledge, yet the presence of French and Germany settlers—even in the 18th century—is not as readily acknowledged. Indeed, the European multiethnic reality of the United States is something that chafes against the dominate narrative on both the Left and the (far) Right of political discourse—both of which often frame the American founding and the conquest of North America as the violent progress of white slave owners in a genocidal fight to the death against the indigenous peoples of the continent.

It is precisely this narrative that Samuel Goldman battles in his excellent forthcoming (June 2021) book After Nationalism: Being American in an Age of Division. In After Nationalism, Goldman attempts to show that the history of America has been one fraught with attempts to amalgamate a wide variety of conflicting religious and ethnic camps into one nation. What is especially interesting in this work is that Goldman (who identifies as an American patriot) at least appears to reject the dominate neoconservative and neoliberal narrative of America as a propositional nation. Rather, he notes the deep need for Americans to recognize the importance of ethnicity, culture, and religion while at the same time maintaining the political unity of the United States of America.

Goldman begins his erudite but very accessible and clearly written work with a recognition of the current crisis of American identity, along with a primer on how Americans historically have attempted to frame their sense of the nation. He divides these visions of unifying America into three key categories: “covenant,” “creed,” and “crucible.”

The first vision, “covenant,” is represented by the belief that Americans are fundamentally an English Protestant people especially chosen by God. Goldman makes the interesting and curious point that many Puritans identified with the ancient Hebrew people very strongly in a religious and even ethnic sense. The covenant vision of America was crystalized, as historian Jill Lepore argues, as early as King Philip’s War (1675-1678). It is also present in Benjamin Franklin’s concern as early as 1751 that Pennsylvania was being overrun by Germans. This view was especially prominent in New England and was closely tied to the Puritan and later Yankee concept of America as a chosen people and was put into political action in immigration and naturalization bills that were heard in Congress in 1790 and 1795. John Jay encapsulates this notion in his Federalist No. 2, in which he celebrates America as one ethnicity and “one united people” derived from the same English ancestors although, as Goldman notes, Jay’s New York was also home to Dutch and Huguenots. Timothy Dwight, the Congregationalist minister and Yale University president, expresses a similar view in his epic poem Greenfield Hill. The Covenant vision was radically challenged by the large numbers of Germans and Irish who migrated to the United States in the 1840s.

This idea is also contained in moderated form in Samuel Huntington’s 2004 Who Are We? The Challenges to America’s National Identity, which lamented the decline of Anglo-Protestant America. Goldman further references David Hackett Fischer fascinating 1989 study Albion’s Seed, which notes the cultural effects throughout the United States due to migration from various parts of Britain. The intra-Anglo diversity was even a source of rivalry and tension, as James Madison worried about the Scots-Irish “white savages” that lived in the Western mountains of the colonies.

The “Creed” vision of America focuses on the philosophical beliefs of the American people in characteristics such as liberty, democracy, and equality, which some scholars see as being rooted in John Locke’s social contract theory. Alexis de Tocqueville also appeared to share this view in his classic work Democracy in America. The Creed vision of American identity was later encapsulated in Swedish sociologist Gunnar Myrdal’s 1944 book An American Dilemma: The Negro Problem and Modern Democracy in which Myrdal argued that legal and de facto segregation were contrary to what the Swedish sociologist called “the American Creed,” which was referred to as the American religion by G.K. Chesterton in 1922. The notion of a melting pot has taken various forms in American history; the sociologist Will Herberg, for example, in his 1955 Protestant, Catholic, Jew: An Essay in American Religious Sociology described America as a “triple melting pot.” University of Chicago sociologist Robert E. Park likewise described the phenomenon of “assimilation” in which cultures meld and join together.

The final vision of America, the crucible, is celebrated in the famous phrase by the Jewish playwright Israel Zangwill who wrote in his 1916 play The Melting Pot: “America is God’s Crucible, the great Melting-Pot where all the races of Europe are melting and re-forming!” However, as Goldman notes, the idea of America as a melting pot was celebrated as early as Jean Hector St. John de Crèvecoeur’s 1782 Letters from An American Farmer. It is also contained in the thinkers of the Young America movement of the 1830s. Throughout American history, the shared American experience of war further advanced the cause of the crucible. The Civil War enabled German and Irish Americans to prove their loyalty. However, as Goldman notes as late as the 1960s, neoconservatives Nathan Glazer and Daniel Patrick Moniyan were bemoaning the failure of the melting pot in their 1963 work Beyond the Melting Pot.

As Goldman notes, throughout America’s history there are those who do not believe that American unity is a good, adopting instead the notion that diversity is the key to American greatness. Goldman identifies freed slave-turned abolitionist Frederick Douglas as one of the originators of this idea. Goldman is somewhat sympathetic to this view, noting that the history of America is one of diverse peoples speaking diverse languages and practicing diverse religions. While Anglo-Saxon culture has dominated American culture, America has been populated, until recently, with a host of mostly European peoples. Many American cities, for example, still have a little Italy; the Chicago River is still dyed green for St. Patrick’s Day and the capital of North Dakota is called “Bismarck” for a reason.

However, over the past fifty years, since the birth of the New Left and its attempt to deconstruct (and perhaps even destroy) the United States, this ideological and intellectual diversity has developed into a simmering civil war. As Goldman notes, since the notorious 1969 meeting of the American Historical Association, there has been a radical effort to rewrite American history. This trend broke into the mainstream with Howard Zinn’s 1980 best-selling book A People’s History of the United States. This effort was further energized by the 1989 meeting of New York State educators that worked to fashion what they called “A Curriculum of Inclusion.” Thus began the culture wars, which raged into the 1990s and continue to our own day in various shapes and forms.

Nonetheless, Goldman, unlike many conservative scholars before him, does not argue for a hegemonic re-establishment of triumphant Americanism from sea to shining sea. Rather, drawing from the work of Catholic scholar Alasdair MacIntyre, Samuel Goldman recognizes that if Americans can no longer agree on basic philosophical principles it will be difficult, if not impossible, to agree on shared political ideas. Nonetheless, drawing from another Catholic scholar, Notre Dame’s Patrick Deneen, Goldman argues for a renewed understanding of America as a “community of communities”.

Catholics should give Goldman’s argument a fair hearing. In the not too distant past, American Catholics lived and worked and prayed in Catholic communities united by a shared culture and ethnicity as well as, more importantly, a shared faith. Many Asian and Hispanic Catholics are blessed to still live in such communities. While we should not abandon the public sphere to secularists, we should give the notion of a (revised) version of Rod Dreher’s Benedict Option serious thought as we strive to renew America by making our own local communities great again.

After Nationalism: Being American in an Age of Division
By Samuel Goldman
University of Pennsylvania Press, 2021
Cloth, 208 pages

About Jesse Russell 13 Articles
Jesse Russell is the author of a number of articles on twentieth-century Catholic political thought as well as works on the poetry of Edmund Spenser. He is assistant Professor of English at Georgia Southwestern State University.