Even if the term sui generis wasn’t invented for him, the late-Monsignor Lorenzo Albacete was its Platonic ideal. Albacete, who died in 2014, was a priest of the Archdiocese of Washington, an astrophysicist, a one-time professor at the John Paul II Institute, and the priest who for many years helped guide the lay movement Communion and Liberation in the United States at its founder’s invitation. The term “larger than life” hardly does Albacete justice. He was a chain-smoking, rotund, utterly hilarious, and irreverently reverent man captivated by his love for Jesus Christ. (For a taste of Albacete see the documentary recently produced by his American friends in Communion and Liberation. Watch to the end for his profound and beautiful answer to a child’s question of why God made dinosaurs.) 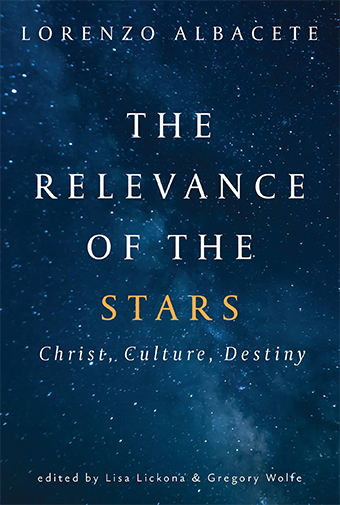 I still remember vividly the retreat he led at Notre Dame in February 2002 for a group of students, faculty, and staff involved with Communion and Liberation. Albacete’s talks helped reorient Lenten disciplines from something negative to something positive—the occasions for a Christian to recapture Jesus Christ present in and at the source of whatever one had given up.

Sadly, at the time of his death, Albacete had only published one book, the beautiful God at the Ritz: Attraction to Infinity (Crossroad, 2002). In that book, Albacete recounts an episode when he was asked by a woman whether the Resurrection of the Body was a metaphor. His response was classic Albacete: “My experience of the body is not the experience of a metaphor. The day this baby becomes a metaphor, I’ll be better equipped to answer your question.” While nothing can replace the flesh-and-blood Albacete, Lisa Lickona and Gregory Wolfe have done us an incredible service by gathering and editing a variety of talks and essays left by Msgr. Albacete into a new book, titled The Relevance of the Stars: Christ, Culture, Destiny. Lickona, Albacete’s former student and Wolfe, editor of Slant Books, are involved with Communion and Liberation.

The Relevance of the Stars takes its title from a story about Monsignor Luigi Giussani, the Italian founder of Communion and Liberation. Giussani, clad in cassock, came upon a young couple making out. Giussani apologized for interrupting and said, “I just have one question to ask you: What you’re doing now, what does it have to do with the stars?” Giussani had “in mind” Garcia Lorca’s poem, “The Encounters of an Adventurous Snail,” “in which the stars represent infinity, the unknowable,” that human beings “are constituted by relationship and that we can discover ourselves capable of an inexpressible relationship with infinity, with the mystery—with the stars.” It is against this horizon that Albacete takes his readers on their journey.

I find it hard to imagine a timelier book. In a world and a Church torn asunder by ideologies, The Relevance of the Stars presents a gritty, incarnational faith that is characterized by freedom, fidelity, and a fearlessness in the face of the world’s questions and desires. As I read through the book, I felt like an old friend was helping me find my balance. Albacete is not afraid of freedom or the desires of the heart. Rather, he is rightly afraid of the ways various ideologies—on the Left and Right—reduce our desires rather than trying to answer and satisfy them. Freedom and desire are often dirty words from which certain Christians cower. Or, in the hands of certain Christians, they become words used to trump our natures and the givenness of reality. Against these ideological readings of freedom and desire, Albacete reclaims them and their intrinsic connection to God and Truth.

While there is so much here that one could linger on, I want to highlight several themes that recur and which seem particularly apt. First, Albacete wants to help his readers see that the Christian faith is not an abstraction—and the necessary implications of the concrete nature of the faith. This does not mean that the faith does not involve the intellect or learning but, rather, as Pope Saint John Paul II wrote, “[b]efore being a sum of doctrines or a rule for salvation, Christianity is the event of an encounter.” For Albacete, the way Jesus Christ reaches us today is the same way he reached Andrew and the other disciple as described at the beginning of John’s Gospel (Jn 1:25-42). Christ captivates us and tells to come and see. With this encounter we can echo Andrew’s words to Peter, “We have found the Messiah.”

Thus, repeatedly in these pages, Msgr. Albacete is at pains to make clear the flesh-and-blood reality of the faith. Albacete writes:

The gospel is the person of Jesus Christ, and Jesus Christ is not an idea, but a concrete, specific, historical individual: the son of Mary—this child, this young man, this Jew who lived in a specific place and time. He is the savior, the redeemer, the destiny of human beings, individually and collectively.

And all true evangelization must begin here. Christians are not called to enact programs or win battles. Through grace they have encountered something—Someone—and they must, in turn, become occasions for others to encounter Him. “Evangelization makes present the fact of Jesus Christ, the power of his presence as the crucified and risen Lord, center of history and the cosmos.” The Church can only evangelize culture “by being the place of such an encounter.” The importance of becoming a place of such an encounter cannot be underestimated. The Church must be the place where the world sees, as Pope Benedict XVI put it, that “Christianity is . . . an encounter, a love story; it is an event.” A truly incarnational faith must lead to a different sort of evangelization than is practiced in most of our lives.

The second theme flows from the first: Albacete sounds the alarm against the deadliness of moralism, the reduction of Christianity to a moral code, “to ethics, to an ethical way of life.” Moralism is decidedly not Christianity. “Christianity begins with the experience of being saved and then seeks to live that experience in the surrounding culture in all its defining points—at work, in human relations, in politics, in economics, and so on.” This means that “what saves us are the facts of the life of Christ and of his death and resurrection, not the ethical consequences drawn from them by the right wing or the left wing.” To be sure, morality is important; it flows from the encounter with Christ and is intrinsically related to Logos through whom all is made.

If anything, Albacete’s approach puts morality on a firmer footing than the extrinsicism of so many traditionalists and progressives, where the moral law is imposed from without. For Albacete, we are changed by the encounter with Christ, but that friendship with Christ is primary. Albacete stresses that all is grace. And the recognition of this fact—that all is grace—must lead us “to respond accordingly, not by trying to be the saviors of this world through our efforts, our good deeds, our politics, our teachings, but by being vehicles through which the grace of Christ can shine and exercise its attractions to those in the earthly city called to it, which is everyone, since God wants all to be saved.” This is a radical call to allow the reality of our encounter with Christ permeate everything, every fiber of our being, every interaction we have.

The final theme that shines brightly through Albacete’s essays is the human heart. Albacete trusts in and affirms the goodness and orientation of the human heart. It is the starting point for true evangelization and for authentic dialogue with nonbelievers. Yet, both inside and outside the Church, we’ve become afraid of our hearts’ desires for infinity. We try to dull these desires, lose them in the “noise” of the modern world. Within the Church we often try to cabin these desires off, reduce them, or dismiss them as merely “worldly.” Albacete will have none of this. “Why settle for less? Why this fear of facing what the heart really wants?” Every question of the human heart, every authentically human question and desire are occasions for our journey to Jesus Christ. They point to our infinite destiny—an infinite destiny who took on human flesh in Christ. Albacete writes that “everything human that is interesting can lead me to Christ. Any manifestation of authentic humanity—human works, human relationships, human dreams, human fears, and even human sins—is linked to Jesus Christ because there is no human reality without Christ.”

While Albacete does not explicitly address the “Nones,” he recognizes, in part, why they exist. Albacete writes, “What the Christian faith proclaims is no longer experienced as corresponding to real life. Real life is that life that can fulfill those desires of the heart that move us and animate us; it is what supports us and sustains us.” Where the world dulls the desires of the heart and many in the Church seemingly limit those desires, is it any surprise that people reject the Gospel? Albacete urges us to start from the human heart, to say to ourselves and unbelievers, that what you desire, what you thirst for is your destiny. Indeed, your thirst has a human face: Jesus Christ.

Lickona and Wolfe have given the world a great gift in editing and publishing this book. For me, reading Albacete’s words after a year which has been a true apocalypse in so many ways—revealing the fissures in the Church and society—was a gift of immeasurable value. Albacete’s humor, intelligence, wit, and his utter conviction that the Incarnation changes everything shine through the pages of The Relevance of the Stars. Ultimately, Albacete’s work is both soothing and disquieting. Soothing because of his balance and sanity. Disquieting because of how often I fail to live my faith as anything more than in the words of then-Cardinal Ratzinger, “an intellectual system, a packet of dogmas, a moralism.” Reading Albacete’s penetrating essays makes me want to tell all my friends anew: the relevance of the stars to every desire of their hearts.

About Conor Dugan 15 Articles
Conor B. Dugan is a husband, father of four, and attorney who lives in Grand Rapids, Michigan.
Xing