He spoke with CWR recently about that novel and the trilogy. 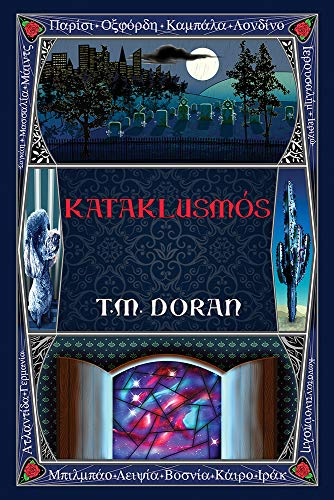 CWR: Why such a strange title?

Doran: The Greek word kataklusmós can signify a cataclysm, a deluge, or a devastation, and all three of those definitions apply to this story.

CWR: Is Kataklusmós a Catholic novel?

Doran: Flannery O’Connor, Evelyn Waugh, Walker Percy, and Gene Wolfe approached their stories with a Catholic sensibility, but this sensibility didn’t preclude physical, moral, and spiritual devastations and depredations. Kataklusmós is such a story.

CWR: Describe what Kataklusmós is about.

Doran: A personal tragedy and the radiant book introduced in Toward the Gleam anchor the story. Two desperate brothers, Frodo Lyle Stuart (an archaeologist) and Sam Stuart (a forcibly-retired spy), seek answers in England, Uganda, Jerusalem, Jericho, Istanbul, Paris, Germany, and Shanghai. Along the way, they encounter people who advance and threaten their mission. And historical “voices” and events from the past are still affecting and haunting those in the present.

CWR: How does Kataklusmós differ from a typical mystery-thriller?

Doran: Modern literature may go so far as to admit that choices produce physical or psychological consequences, but can’t admit that such choices are inherently good or bad, right or wrong. So modern literature often depicts human beings as intelligent animals programmed by natural processes to respond in predictable, albeit dramatic, ways.

Kataklusmós challenges this simplistic description. Science, philosophy, and faith were once closely connected, and were considered to be different ways of looking at a single reality, but, since The Enlightenment era, those subjects have been separated into specialties and sub-specialties that have little to say to one another. Kataklusmós challenges the estrangement of science, philosophy, and faith.

CWR: What’s the connection to Toward the Gleam?

CWR: What was your greatest challenge with this book?

Doran: I’ve read multi-volume series that didn’t live up to the promise of the first book. So, my greatest challenge was imagining, and then composing, an ending to the series that measured up. That means Kataklusmós went in directions I hadn’t imagined when I embarked on the story. Readers will decide how well I succeeded.

CWR: Are you working on any new projects?

One of these stories, “Mr. Tanner”, will soon be published by Catholic Arts Today. Perhaps the collection of stories will be published someday. Regardless, composing these tales has been a joy and a challenge.

The Catholic artist and the challenge of evangelizing modern culture

Rhonda Franklin Ortiz, in her illuminating CWR essay “Popular fiction and the Catholic Literary Renaissance” (April 25, 2021), describes how well-crafted popular/genre fiction can be a worthy endeavor for Catholic authors and worthy reads for […]

Jared Ortiz is Associate Professor of Religion at Hope College and founder and executive director of the Saint Benedict Institute. He is the author of You Made Us for Yourself: Creation in St Augustine’s Confessions (Fortress Press, […]

“The arts are languages of the soul”: An interview with Michael O’Brien

Iconographer, painter, and writer Michael O’Brien has been a unique creative force for decades. He is the popular author of several best-selling novels, including Father Elijah, Elijah in Jerusalem, The Father’s Tale, Eclipse of the Sun, Sophia House, Theophilos, The Fool […]