In the modern imagination, the difference between a complex machine such as a computer and a living thing such as a dog … is merely one of degree”, writes Michael H. Storck in his chapter, “Brother Wolf or Robo-Dog?” The various authors of The Glory of the Cosmos reply to this failure of the modern imagination while addressing the broad topic of the human imagination and the cosmos. They depict the validity and depth of the Catholic imagination for the environment, and elaborate on how this imagination shows the way to a proper relationship with the created order. 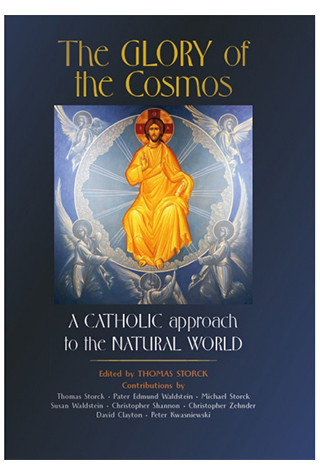 Though the writers address a range of issues, they share the belief that modern, Cartesian philosophy—not the Biblical call for man’s dominion over creation—ultimately paved the way for our terrible ecological situation. The traditional Catholic imagination, as expressed by ancient and medieval thinkers, judges creation as good and urges us to start treating the created order as good in itself and not as a meaningless resource to be exploited. From the Catholic view, the environmental crisis signifies a spiritual and theological crisis, as the contributors make clear.

The authors contrast holistic with partial views of reality. By breaking things down into ever-smaller component parts, modern science loses sight of the larger picture. The parts seem greater than the whole. The Catholic vision asserts the opposite: When looking at whole substances, ranging from an atom to a human or a galaxy, “the whole is prior to the part” according to Storck. By its actions, science denies that an oak tree, a bird, or a human possesses an essence that cannot be broken down. Yet Storck notes the sensibility of a holistic perspective:

The unity of a living thing is a fundamental fact of our experience, a starting point rather than a conclusion. Because of this, all the parts of a living thing, ranging from atoms and cells to heart and brain, cannot be present as substances; they must depend on the whole living thing.

This counters the Darwinian view: natural substances are not simply a random collection of components “that just happens to act in a regular way.” The Aristotelian-Thomistic discussion in Storck’s argument provides a philosophical foundation without bogging us down in concepts and abstractions.

The Glory of the Cosmos is often inspiring, though it also refers often to what we seem to have lost. The Greek-inspired medieval understanding of the cosmos followed a long line of thinkers, from Boethius to the School of Chartres to Dante and Chaucer. Boethius’ discussion of the quadrivium laid a crucial foundation stone in the productive fusion of Greek philosophy and Christian theology. Regarding Boethius’s imagination of the cosmos, David Clayton notes the notable role of aesthetics: “human beings are hardwired to pick up information presented in accordance with the pattern of the divine mind. Nature appears beautiful because we recognize in it the thumbprint of the Creator.” This examination of the symbolism of nature according to ancient and medieval Christians shows us what a contemplative relationship with nature is. Even greater weight on this topic would have strengthened the entire book given how practical and inspiring it is.

A key theme is the meaning of nature’s beauty. The spiritual and philosophical meaning of nature’s beauty includes the often-neglected topic of number symbolism, which powerfully appeals to the human imagination. Clayton helpfully cites Benedict XVI’s poetic musings on the ancient pagan understanding of the “intelligent mathematical movements of the heavenly bodies.” This understanding, contemplative and theological in nature, was borrowed by Christians, for whom, according to Benedict XVI, “perceiving the ‘music of the cosmos’ thus becomes listening to the song of angels.” For the ancient and pre-nominalist medieval mind, whether pagan or Christian, mathematics did not pursue a cold analysis of the mechanics of the universe in order to exercise power over nature. Mathematics encouraged a contemplative appreciation of the universe.

Christopher Shannon’s chapter on Romano Guardini’s Letters from Lake Como provides a fascinating discussion on the vital role of beauty for the pre-industrial contemplative imagination and the connection of beauty both to nature and culture. Guardini saw culture as offering a solution to the growing alienation between humans and nature. This points to the fact that economics is a spiritual issue, as economics concerns the right and balanced management of resources and a natural relationship with nature. This balance contrasts with what Guardini saw as an increasingly unnatural relationship that was promoted and pursued by industrialization and consumerism. Shannon repeats Guardini’s call for a rejection of the consumerist mentality because it harms us spiritually and pollutes the Earth.

Many of the book’s authors discuss the fallout of Cartesian philosophy and its divergence from the Aristotelian-Thomistic outlook. Cartesian philosophy undermined the view of nature as God’s creation overflowing with symbols that point to ontological truths. Nature became disenchanted and came to possess no higher metaphysical significance, as Edmund Waldstein O.Cist. describes:

The outside world becomes the featureless res extensa (extended thing), the object of Cartesian mathematics. This Cartesian world is totally lacking in ‘natures’ as intrinsic principles of motion toward an end. It is without purpose, and without any interior activity. All motion is seen as the effect of external forces. This world does not even have any of the qualities known to our senses.

Unsurprisingly, Cartesian philosophy led to the alienation of the western spirit and imagination from nature, as many of the authors of this book explain.

Even religious leaders and theologians have been affected by this disenchantment of nature. For example, the Church has failed to speak out strongly and clearly enough against GMOs, according to Peter Kwasniewski in a particularly memorable chapter. He refutes the common claim that GMO technology is needed in order to save the starving world. Neo-imperialism is really to blame for food shortages in parts of the world. He shows how metaphysics, specifically substantial form as taught by Aristotle and St. Thomas, can provide us with a clear grasp of the issue. The concept of substantial form undermines the case for GMOs: “to manipulate the material elements of a thing is an assault on its formal integrity. On Aristotelian grounds, no one can actually modify a substantial form.” The author characterizes nature as sacred, calling “the genetic structure of living things … their inner sanctum”. Kwasniewski ends with the observation that the traditional Catholic perspective defined nature in metaphysical terms since it expresses God’s beauty.

The authors don’t simply focus on where we have gone wrong, but instead re-imagine nature and our proper place in it. This includes acknowledging the hierarchy that is inherent to creation. Susan Waldstein in “Hierarchy in a New Natural Science” argues that “there is radical discontinuity between man and beast, even the highest primates.” The author notes the gap between thinking and sensing: “Thinking … involves grasping the universal natures of things, while sensing is awareness of particular sensible bodies.” This thinking-sensing distinction is simply part of the ordering from “less perfect to more perfect beings in nature”, which the author helpfully elaborates on. This hierarchical view challenges Cartesian-Baconian science, which levels all creatures and elements. A hierarchical ordering of nature is essential to perceiving it in metaphysical terms. Perhaps more in this chapter (or elsewhere) on late medieval nominalism and how it challenged the traditional worldview in the West could have provided much-needed insight into why our culture eventually became so anti-hierarchical in the first place.

The authors of The Glory of the Cosmos reflect on the theology behind our concept of the cosmos. Poor theology and catechetics results in a deficient understanding of the natural world and of our place in it. Thomas Storck, editor of the volume, observes that deism, or the assertion of a watchmaker god who creates the world and then leaves it to itself, is still widespread. While modern science asserts itself as the ultimate voice over nature, our perception of the cosmos is actually a theological matter. Unfortunately, contemporary theology is not necessarily up to the task of challenging science.

In the Epilogue Peter Kwasnieski ties a declining theology to a declining metaphysics, which in turn comes from a philosophy of nature in a similar condition. This latter is moribund because “natural history, that is, carefully paying attention to natural things in their natural environments, is moribund; and this so, because men are no longer looking and listening to the world, but watching television, reading newspapers, bending like slaves over the work desk or popping instant dinners into the microwave.” Lifestyle choices reflect a certain spiritual and philosophical foundation that impedes a connection to creation.

The book’s authors provide no easy answers. They mainly discuss the historical origins and development of the environmental fix in which we find ourselves. Passing environmental laws or establishing protected spaces for nature may seem like solid steps in the right direction. However, the analyses offered here shows that such steps are ultimately inadequate if not accompanied by deeper changes. Industry and scientism will keep grinding on until all of nature is under their power no matter how many environmental protection laws governments enact.

The various authors of The Glory of the Cosmos address the human imagination for nature, and where this vision comes from. We can re-imagine our relationship with nature largely by re-imagining nature itself. The book’s concern for the environment includes a focus on economics. Wrong-headed economics has brought much environmental destruction. And behind economics lies a wrong-headed spiritual disposition that has roots in misguided philosophy. A philosophy of being is fundamental to a rightful spiritual disposition. This rightful disposition towards the environment would follow Aristotle’s contemplative view of science, which would mean a contemplative relationship with the created order in the human imagination.

The Glory of the Cosmos: A Catholic Approach to the Natural World
Edited by Thomas Storck
Arouca Press, 2020
Paperback, 150 pages.