I have often commented to my students that the fact that an idea is self-evident nonsense will not keep large numbers of people from believing it and sometimes doing countless damage thereby. The past century provides numerous examples, from lobotomies to Maoism.

Yet there is one obviously wrong idea that has already proved to have a longer lifespan than either of those disasters and shows no sign of easing its grip on the moral imagination of Western society: expressive individualism. This is the idea that we are, at our most fundamental level, that which we feel ourselves to be inside. And that authenticity is therefore to be found in being able to act freely in a manner consistent with those feelings.

Expressed in such a way, many readers might wonder at why this is problematic. Well, it is problematic because of the anthropology—the general philosophical understanding of the self of which it is a facet. 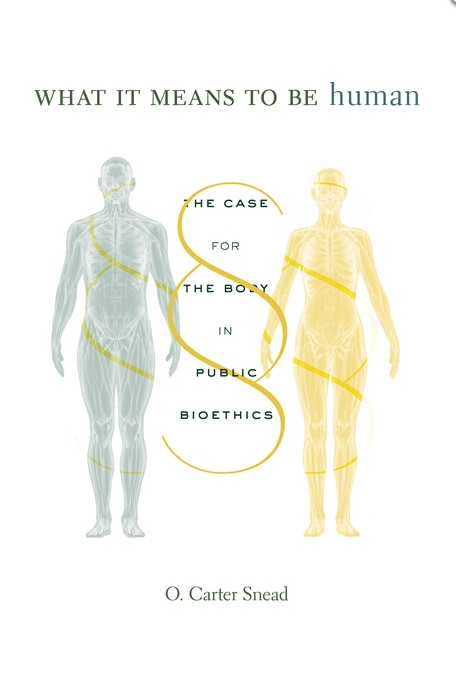 This absurd though seductive anthropology is captured in the phrase with which Rousseau begins his essay on the social contract: ‘Man is born free but everywhere is in chains.’ It is absurd because it is obvious human beings are not born free. In fact, when compared to other species, we are born utterly dependent upon our parents for a remarkably long period of time. A child aged five is scarcely more capable of fending for itself than a newborn. But for all of its absurdity, Rousseau’s idea is very seductive. This is because it appeals to our intuitive sense of freedom and to that human, all too human, tendency to imagine the universe exists with us at its very center. And that has played a large part in making this the normative view of human selfhood in modern western society.

O. Carter Snead, the distinguished Notre Dame bioethicist who is also a member of the Pontifical Academy for Life, places this incorrect but powerful notion of selfhood at the center of his narrative and analysis of modern bioethics. Offering both a brief history of the emergence of bioethics in American political culture and an analysis of three specific areas—abortion, reproduction, and death—Snead demonstrates how the dominant logic of the bioethics establishment assumes expressive individualism as fundamental. But he does more than this: he also offers a vision of how a different understanding of selfhood might lead to varied and more humane approaches.

Snead’s account of how and why bioethics came to be a matter of public interest makes harrowing reading and goes to the heart of a number of the deeper and darker pathologies of American culture, not least those of race and poverty. But the books real contribution lies in Snead’s anthropological proposals regarding the way forward.

Two important assumptions lie at the heart of expressive individualism. First, individual human happiness is the ultimate criteria for decision making. Second, the body tends to be regarded as instrumental to that happiness. Thus, abortion is legitimate if bearing a child inhibits the mother’s happiness. The baby in the womb is, after all, either a mere part of the woman’s body or an alien presence in the woman’s body. Either way the termination of the pregnancy makes sense on the basis of the anthropological assumptions of expressive individualism.

As an alternative to this, Snead asserts the centrality of the body to human selfhood, a move that he connects with the work of his colleague Alasdair MacInytre. MacIntyre argues that human beings are dependent, rational animals, and Snead identifies our bodies as central to that. Precisely because I am a body, the whole notion that I am born free is nonsense. At birth, I am thus dependent upon my mother for milk and my father for physical protection. As I move through life, I am always, to a greater or lesser degree, dependent upon others for my survival. And as I approach the end of my life I am once again as acutely and directly dependent once again on others for an increasing number of things. We are born dependent on others and remain so. Snead’s point—which, because of its basic anthropological claims, has applications well beyond the area of bioethics—is that this must lie at the heart of any truly human and truly coherent ethical discourse.

Snead applies this idea to three specific areas of bioethics: abortion, assisted reproduction, and end-of-life care. On the first and third, he spends time addressing the Supreme Court’s rationale in the two key 1973 abortion rulings, Roe v. Wade and Doe v. Bolton. Both judgments were predicated on the notion of the supreme sovereignty of the atomized individual, something which receives even more explicit sanction in Anthony Kennedy’s bizarrely mystical definition of personhood in Planned Parenthood v. Casey. In a manner anticipating the later pro-abortion thinkers such as Peter Singer, the Supreme Court assumed as foundational a notion of the self as that which involved self-consciousness and the ability to make free decisions without reference to any unchosen obligations. And in doing so it allowed for both the absolute priority of the woman’s health over that of the baby in the womb and an ever-expanding psychological notion of what constitutes a woman’s health in such circumstances.

A moment’s reflection on such logic indicates the arbitrary and somewhat terrifying implications of such a view: it really offers no protection either to newborns, to infants, or to the mentally impaired. As I read Snead’s analysis, it seemed to me that the fact this legal logic has not yet been applied to killing such is more a function of the current tolerance levels of public taste than anything else. Snead’s alternative is to press home the dependency of us all upon others, and thus a notion of the selfhood which removes decision making autonomy from the center. Instead of being constituted by rights, the self-conscious decision-making individual is constituted rather by obligations. And that changes everything. The woman does not have the right to choose; she has an obligation of nurture and protect.

The same lack of limits applies to end-of-life care. Snead’s analysis of assisted suicide laws shows that the logic cannot be restricted to, say, extreme cases of pain and terminal illness. Already such laws are being used to kill those with autism, depression, and a sense of meaninglessness. In addition, such a culture of euthanasia will exert a gravitational pull on health resources that may well lower the criteria for deciding which illnesses and what age groups are unworthy of serious treatment.

I suspect that most Christians have generally sound views on the matter of abortion and on euthanasia—although maybe less so on the latter, given instinctive sympathy for those who are suffering and incurable. Given this, Snead’s book will help give a solid and clarifying foundation for our intuitions. Where I believe his work proves most helpful (and likely controversial) for such Christians is in his treatment of artificial reproduction. The problem is obvious: the desire of a married couple for a child is a good thing; and when they are unable to have a child, that can be heartbreaking. So does the great good of bringing a child into this world not trump all other concerns? Are there limits to what a Christian couple may do to accomplish this great good? And, if so, where are these limits to be set?

In his treatment of this area, Snead again demonstrates how the current legal situation in America, along with many of the guiding principles of the culture of artificial reproduction, are predicated on the notion of the production of children as a means by which the parents are able to find personal fulfillment. This then tilts the moral imagination favorably towards such things as genetic screening of embryos, reinforces a culture of abortion for comparatively trivial reasons, and at base makes the child a commodity, something to enhance that feeling of personal well-being which is the ethical priority of the expressive individual.

The collateral effects are dramatic: among other things, we now have a world where vast numbers of embryos are in storage, human life has been made into a commercial transaction, and there is a growing market for surrogacy which in its very essence denies the importance of the mother’s body for the child. These are all morally significant issues but—and here is the rub—our world legislates bioethics on the basis of a culture of expressive individualism. As with abortion and euthanasia, this precludes any significant role for the dependent nature of human life and the idea that we are first defined by our obligations to others and not by our individual rights. Snead is careful not to press too many prescriptions in this most sensitive and pastorally difficult of contexts, but he provides plenty of material for Christians wrestling with infertility to think through.

A review of this excellent book can barely touch on the insights and ideas it contains. Snead convincingly demonstrates that the current state of the law in each of these three areas—abortion, reproduction, and euthanasia—is at root a function of our culture’s commitment to the nonsensical notion of the expressive, autonomous individual. That is in a sense depressing. The problems he notes in the law are so deeply embedded in our social imaginary that there is no simple solution. And while he is correct to call for a new, very different anthropology, one cannot simply legislate such a thing. It first has to grip the moral imagination of society as a whole and that will be a long, difficult process, if it succeeds at all.

In the meantime, however, the Christians can benefit immensely from this book because it lays out with grace and power a vision of human flourishing that can at least be realized by the Christian community of the church. And by doing so, we will be able to witness to the world around us that yes, there is a better way.

What It Means to Be Human: The Case for the Body in Public Bioethics
By O. Carter Snead
Harvard University Press, 2020
Hardcover, 336 pages.

About Carl R. Trueman 3 Articles
Carl R. Trueman teaches humanities at Grove City College in Pennsylvania. He is the author of the recent volume The Rise and Triumph of the Modern Self (Crossway).