Vatican City, Dec 15, 2020 / 02:00 pm (CNA).- Since it was unveiled last Friday, the Vatican’s nativity scene in St. Peter’s Square has elicited diverse reactions on social media, many of them strongly negative.

“So the Vatican presepe has been unveiled….turns out 2020 could get worse…” wrote art historian Elizabeth Lev in a post that went viral on Twitter. “Presepe” is the word for manger scene in Italian.

But Marcello Mancini, a teacher at the art institute where the ceramic nativity set was made, defended it, telling CNA that “many [art] critics have appreciated this work” over the years.

“I’m sorry about the reactions, that people don’t like it,” he said, emphasizing that “it is a nativity scene that must be framed in the historical period in which it was produced.”

Since the 1980s, the Vatican has displayed a nativity scene in front of St. Peter’s Basilica for the Christmas season. About a decade ago, it became the custom for the scene to be donated for display by different Italian regions.

This year’s nativity comes from the region of Abruzzo. The 19 ceramic figures, which include the Virgin Mary, St. Joseph, the Christ Child, an angel, the three Magi, and many animals, come from a set consisting of 54 pieces made over the course of a decade in the 1960s and 1970s.

The display in St. Peter’s Square was inaugurated together with an almost 100-foot-tall Christmas spruce on Dec. 11, and immediately, two unusual figures in the scene caught the eye of onlookers.

Referring to a helmeted figure with a spear and shield, Rome-based Catholic tour guide Mountain Butorac said “in no way does this horned creature bring me Christmas joy.”

In another tweet, Butorac described the whole nativity scene as looking like “some car parts, kid toys, and an astronaut.” 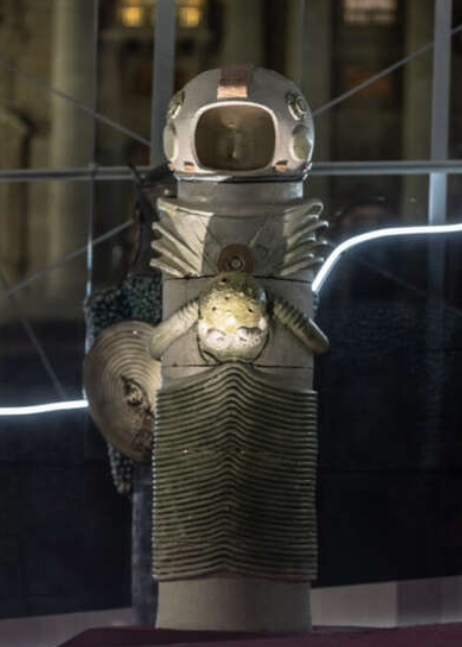 The soldier-looking statue is a centurion and signifies a “great sinner,” explained Mancini, a teacher at the school where the nativity set was made. He is also vice president of the F.A. Grue Institute of Art, which is located in the town of Castelli in central Italy and also serves as a high school.

He noted that the astronaut was created and added to the collection after the 1969 moon landing, and was included in the pieces sent to the Vatican at the behest of the local bishop, Lorenzo Leuzzi.

Castelli is famous for its ceramics, and the idea for the nativity came from the then director of the art institute, Stefano Mattucci, in 1965. Different teachers and students of the institute worked on the pieces.

The 54-piece set which exists now was completed in 1975. But as early as December 1965, the “Monumental Nativity Scene of Castelli” was exhibited in the town square of Castelli. Five years after that, it was shown at Trajan’s Market in Rome. Later it also made its way to Jerusalem, Bethlehem, and Tel Aviv for exhibitions.

Mancini recalled that the work had also received mixed reviews in Castelli, with people saying “it’s ugly, it’s beautiful, it seems to me… it doesn’t seem to me…” He commented: “It doesn’t embarrass us.”

About the reactions to the scene being at the Vatican, he said, “I do not know which criticism to answer, the school has allowed the exhibition of one of its historical artifacts.” He also pointed out that it was not made by artisans but by a school.

“It is rich in symbols and signifiers that offer a non-traditional reading of the nativity scene,” he explained.

But people look to the Vatican “for the tradition of beauty,” said Lev, who lives in Rome and teaches at Duquesne University. “We keep beautiful things in there so that no matter how awful your life is, you can walk into St. Peter’s and that’s yours, that’s part of who you are, and it reflects who you are and the glory of who you are,” she told the National Catholic Register.

“I don’t understand why we’d turn our back on that,” she added. “It seems to be part of this strange, modern loathing and rejection of our traditions.”

The Vatican department responsible for organizing the nativity each year is the Governorate of Vatican City State. It said in a press release that the artwork was influenced by ancient Greek, Egyptian and Sumerian sculpture.

The Governorate of the Vatican City State did not respond to a request for comment on Tuesday.

In his speech at Friday’s unveiling, the president of the department, Cardinal Giuseppe Bertello, said that the scene helps us “understand that the Gospel can animate all cultures and all trades.”

A Vatican News article Dec. 14 called the scene “slightly different,” and said that those with negative reactions to the “contemporary nativity scene” may not have understood its “hidden story.”

The article quoted Pope Francis’ 2019 letter “Admirabile signum,” in which he said it is customary “to add many symbolic figures to our nativity scenes,” even figures “that have no apparent connection with the Gospel accounts.”

In the letter, which means “Remarkable sign,” Francis goes on to mention figures such as a beggar, blacksmith, musicians, women carrying jugs of water, and children at play. These speak “of the everyday holiness, the joy of doing ordinary things in an extraordinary way, born whenever Jesus shares his divine life with us,” he said.

“Setting up the Christmas crèche in our homes helps us to relive the history of what took place in Bethlehem,” the pope wrote. “It does not matter how the nativity scene is arranged: it can always be the same or it can change from year to year. What matters is that it speaks to our lives.”

“Wherever it is, and whatever form it takes, the Christmas crèche speaks to us of the love of God, the God who became a child in order to make us know how close he is to every man, woman and child, regardless of their condition,” he said. 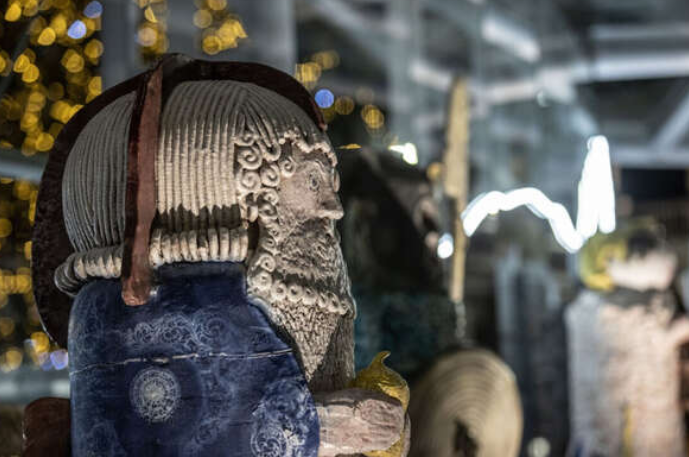