I recently started looking into nihilism… but then I realised it was pointless. For some, that joke is enough to expose the absurdity and illogic of a philosophy that holds that there is no meaning or purpose behind our actions, our world, or our universe. Yet nihilism has held tremendous power over many public intellectuals. Albert Camus comes to mind — he wondrously mused that nihilism opens a world where “everything is possible.” Cormac McCarthy in turn asserted: “The point is there ain’t no point.” Flannery O’Connor noted: “If you live today, you breath in nihilism … it’s the gas you breathe. If I hadn’t had the Church to fight it with or to tell me the necessity of fighting it, I would be the stinkingest logical positivist you ever saw right now.” 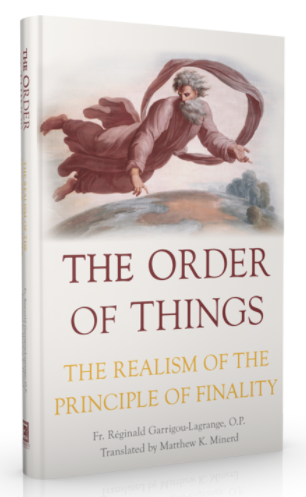 A cursory knowledge of philosophical truth is valuable for Catholics, making them capable of explaining why there is indeed meaning and purpose not only to our own existences, but to everything we see and experience. Certainly such knowledge serves an apologetic function. Yet it also confirms in the mind of the believer that his or her faith rests on solid intellectual ground, that it is indeed reasonable. One who well understood this was Fr. Réginald Garrigou-Lagrange, O.P., the French twentieth-century Thomist theologian who influenced, among others, a young Karol Wojtyła. Garrigou-Lagrange’s The Order of Things: The Realism of the Principle of Finality recently translated by professor of philosophy and moral theology Matthew K. Minerd, offers an excellent aid to those seeking logical clarity to bolster their faith in a deeply illogical world.

There are many foundational philosophical concepts worthy of memorization. Two that Garrigou-Lagrange expends great energy helping us understand are the principles of noncontradiction and finality. Both, the French Thomist argues, are required for making sense of ourselves and the world. Both are also self-evident. In an age increasingly skeptical and indifferent to faith, it is vital we be able to comprehend and effectively articulate them.

The Principle of Noncontradiction

The principle of noncontradiction, argues Garrigou-Lagrange, is the “fundamental law of thought and reality.” This law holds that contradictory propositions cannot both be true in the same way at the same time. In other words, the two propositions “A is B” and “A is not B” are mutually exclusive. I cannot claim to be of Polish descent and not of Polish descent, and you cannot claim at this very moment to be both reading and not reading this sentence. Minerd defines the moderate realism endorsed by Garrigou-Lagrange in this way: “being is not non-being; that which is is and cannot at the same not be. There is more in that which is than in that which becomes and does not yet exist.”

To reject the law of noncontradiction results in embracing nonsensical absurdities, such as claiming that you are John and also not John, from Detroit and also not from Detroit, breathing and also not breathing. Those who attempt such silliness, argues Garrigou-Lagrange, cannot be “taken seriously for a long time. They have become sick willingly. They have fallen into mental illness and would have us believe that it is wisdom.”

Another way of articulating this is to say that there is an essential difference between becoming and non-becoming, or being. This difference matters in reference to the argument for God’s existence based on motion, or change. Garrigous-Lagrange explains: “If a first source of action did not exist at the summit of this subordination, no subordinate causality would exist and neither would any effect. Therefore, there must be a supreme agent that has no need of being premoved and, thus, its own action.” In other words, that being and becoming are ontologically different necessitates the reality of a being that is pure act, who doesn’t become. Such a being is a supreme agent that is “Being Itself, Pure Act.” This is Aquinas’s “First Way.”

Teleology, or finality, is the principle that “all that is done is done in view of an end,” or, phrased slightly differently, “every agent acts for its end.” Aristotle affirms this idea in his Metaphysics, while Aquinas affirms it in both the Summa Theologiae and his De potentia. We see finality at work in nature that has its own intentions. Acorns tend to form oak trees. Birds build nests in which to lay eggs. Eyes are for seeing, ears for hearing. Garrigou-Lagrange argues that finality is self-evident, because we inherently and automatically perceive that things are for something.

Indeed, without finality, nothing has any intrinsic value, nor can one determine what is good, fitting, useful, or delightful. Even the fact that we employ the word “chance” — the accidental cause of something that rarely occurs, outside the intention of nature or of man — suggests that we implicitly understand there is such a thing as order and finality. Explains Garrigou-Lagrange: “If you reduce everything essential to the accidental, you destroy every nature — that of water, air, and fire. All that then remains are chance encounters and nothing which could undergo such encounters. We must choose between radical absurdity and finality.” Put more bluntly, if there is no finality and everything is accidental, nothing would exist.

Finality also illuminates the difference between humans and other animals, all of which lack intellection: while not all engineers build the same bridges or painters the same portrait, various animal species do the same thing. You will encounter no rebellious, avante garde bee who decides instead of hives and honey to build nests or dig in the ground for acorns. Moreover, we as humans uniquely perceive the finality in the fact that even small children incessantly ask “why,” precisely because they presuppose there is reason and intelligence behind all things.

In this regard, we can appreciate how finality clarifies another proof for the existence of the divine. Aristotle in his Metaphysics argues: “It is not likely that the order and beauty that exist in all things or are produced in them has the earth or some other element of this kind as their cause…. To attribute these admirable effects to chance, to a fortuitous cause, was far too unreasonable.” Aquinas in turn argues in the Summa: “Now whatever lacks knowledge cannot move towards an end, unless it be directed by some being endowed with knowledge and intelligence; as the arrow is directed by the archer. Therefore, some intelligent being exists by whom all natural things are directed to their end; and this being we call God.”

Finality underlies the first principle of practical reason: good must be done and evil avoided. This is because things act towards their ends, and those ends are for their good. The bird naturally acts towards the end of building the nest to lay eggs to create offspring. It doesn’t, alternatively recklessly dive-bomb turtles in the nearby pond. Of course, humans do act in ways that do not facilitate their good: betraying loved ones, engaging in addictive behavior, and otherwise harming themselves. Yet in all of these cases humans act out of a misplaced understanding of the good — the alcoholic takes another drink not to kill himself but to bring comfort or distraction from something bad. The drink is perceived, albeit wrongly, as good.

In the introduction to The Order of Things, Garrigou-Lagrange argues: “many histories of philosophy present us with nearly all teachings as though they were situated at the same level. In them, the most foolish of such doctrines seem to have the same value as those that are the wisest, merely because such foolish thoughts are proposed in a somewhat original way.” If this is true of anything, it certainly is true of much contemporary academic philosophy that rejects absolute truth. One wonders, if the skeptics are right, what’s the purpose of studying anything?

While Aristotle, Aquinas, and Garrigou-Lagrange help us recognize the common-sense of noncontradiction and finality, philosophies of skepticism only lead us to doubt the things we naturally perceived as children. As adults we should be maturing into a deeper understanding of reason and teleology, not devolving into some bizarre species incapable of identifying its own good. The Thomists declare Omne agens agit propter finem: “Every agent acts for an end.” A world as confused as ours is in desperate need of hearing and understanding those words.

The Order of Things: The Realism of the Principle of Finality
By Fr. Reginald Garrigou-Lagrange, O.P., Translated by Matthew K. Minerd
Emmaus Academic, 2020
Hardcover, 392 pages

A Saintly View of Vatican II: On St. John Paul II and the Council

Editor’s note: This essay, which originally appeared at CWR on May 31, 2020, is reposted in honor of St. John Paul II’s feast day. “By canonizing some of the faithful, i.e., by solemnly proclaiming that […]

Thanks to the fine work of Matthew K. Minerd a score of previously untranslated essays by Réginald Garrigou-Lagrange, O.P. (1877-1964) are now available in English. The collection, entitled Philosophizing in Faith: Essays on the Beginning […]