Perhaps the second best-known martyrdom in the history of the Anglophone world is St. Thomas Becket, killed in Canterbury Cathedral during Vespers at the hands of four knights motivated by King Henry II of England’s ranting that the archbishop was a traitor whom he wished to be rid of. That Becket and the king had once been close friends, that Henry wished for one of his allies to become primate of England and that the future martyr’s elevation to that position was followed by his transition to a holier mode of life and by a staunch defense of the Church against royal power are also matters of common knowledge. 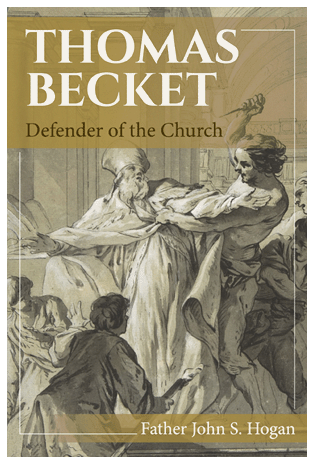 Those who have done even cursory research into the topic will be aware that popular perceptions of it include a high proportion of myth, much of it derived from the Jean Anouilh play that bears the martyr’s name and served as the script for the movie starring Richard Burton and Peter O’Toole. But those reading Father John Hogan’s Thomas Becket: Defender of the Church will, unless they have already made a more serious study of that saint’s life, be surprised by the full extent to which the Becket legend is filled with misunderstandings and misrepresentations.

Among the most egregious errors corrected in this book is the one claiming that Becket, despite being a deacon, was sunk in a life of immorality before his selection for the episcopate inspired a dramatic conversion. In reality, the worldliness of Becket’s early life concerned matters of perfection and prudential judgments rather than intrinsically grave sin. His love of luxury and ostentatious magnificence was joined to strict chastity and financial charity for the poor that could be as lavish as his own lifestyle. The real change he underwent after being selected as archbishop was the rejection of minimalism in favor of a seriously devout life. Although, his devout life was grounded in the spiritual formation he had received from his mother during childhood and a basic commitment to Catholicism that had never left him.

Even one of the early Becket’s very real flaws, his willingness to assist encroachment on the autonomy of the Church, is open to exaggeration. The best known conflict between chancellor Becket and England’s Catholic hierarchy concerned a tax that was not new and that did not directly target the Church. What Beckett did do was enforce a neglected law in which landholding knights legally liable to military service could pay a fee for hiring professional substitutes, changed a graduated scale of fees to a flat rate that hit the lesser knights hard and applied the law to lands in the hands of clergymen. Another notable case was grounded in a conflict of jurisdiction between a diocese and an abbey, Becket working on behalf of the latter in obedience to a king intent upon using the issue to weaken episcopal authority.

But even during the years when Becket was most closely cooperating with Henry he was still willing to stand up to him over ecclesial issues. At one point the king, wishing to gain control of Blois, insisted upon a marriage between his cousin and the heiress of the land’s recently deceased ruler—an heiress who was also an abbess entirely opposed to asking for a dispensation from her religious vows and to leaving her convent. When Henry decided to have her kidnapped, Becket condemned him to his face with all the vigor he later showed as primate.

Becket later intervened on behalf of the secretary of John of Salisbury (at the time secretary to Archbishop Theobald of Canterbury) whom Henry had decided to charge with treason. Salisbury was saved, becoming one of the more prominent thinkers of the age, a member of Archbishop Becket’s inner circle and author of one of the martyr’s first biographies. Salisbury’s biography of Becket stressed that the chancellor was commonly at odds with his royal master and concerned about the latter’s more tyrannical tendencies well before there was any question of elevation to the see of Canterbury. True as it is that the Becket chosen to replace Archbishop Theobald was still something of a king’s man, he was hardly the king’s lackey. He also had a background closer to that of men commonly chosen for the episcopate in his day than is usually realized.

The seminary system as we now know it (with precisely delimited courses of studies followed by priestly ordination) was a creation of the reform movements associated with the Council of Trent. In the twelfth century men simply became members of the diocesan clergy, being admitted to the non-sacramental minor orders and then rising based on their education, sanctity, demonstrated abilities and the needs of their dioceses rather than in accordance with any set program.

Both before and during his years as the king’s chancellor, Becket also held the office of archdeacon of Canterbury—a senior diocesan administrative post. Archdeacons often knowing more about running a diocese than many parish clergymen, it was unremarkable for them to be chosen as bishops despite never having been priests. That, his experience as chancellor, and the fact that he was an expert canon lawyer rendered Becket highly qualified for the primate’s duties as an administrator. This role made him responsible for the Church throughout England. His lack of advanced theological training (for which he quickly made up) and his mode of life (which he quickly reformed) meant that he seemed set to be a bureaucratic archbishop rather than either a spiritually zealous or a scandalous one.

Of course, Henry II got a very different new primate than the one he had expected. While telling the true story of their conflict generally involved only the addition of fuller details rather than revising the broad picture, a brief mention of the real roles of Pope Alexander III and King Louis VII of France is in order. The latter did not use Becket as a political pawn but was sincerely sympathetic both to his stand for the Church and to him personally as a man, though he did sometimes compromise his inclinations for political reasons. The former was a reforming pontiff loyal to the program of the great Pope St. Gregory VII, one whose occasional vacillation was motivated by a desire to avoid Henry II dragging England into schism in alliance with the notorious Frederick Barbarossa—who supported a series of anti-popes, periodically conquered parts of Italy and forced Alexander to spend much of his pontificate in exile.