Did you know the Catholic Church has officially ruled that we’re not to try and fix a date for the arrival of the antichrist? The decree was composed in 1516, at the Fifth Lateran Council, under Pope Leo X. It says: “We command all those who exercise the function of preaching or will do so in the future, not to presume, either in their sermons or in their affirmations, to fix a date for future evils, whether for the coming of Antichrist or for the Day of Judgment.” 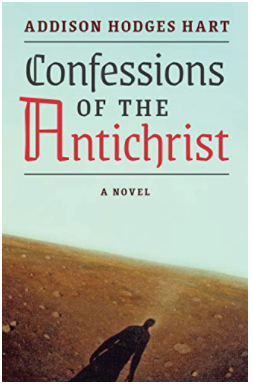 That certainly hasn’t stopped the figure of the antichrist and his war on the Church filling the imagination and moving the pen of popes like St. Pius X in his first encyclical, or St. John Paul II when still cardinal, saints, mystics, theologians, and novelists down the centuries. Confessions of the Antichrist, by Addison Hodges Hart, is among the latest additions to a well-established genre of dystopian, antichrist literature.

Author with an axe to grind?

However, Confessions of the Antichrist bears little resemblance to more established and respected literature. Published at the start of this year, it reads as a vehicle for the author to vent his spleen, through the plot and characters in the novel.

It’s generally considered poor form to embark on ad hominem critiques, but the figure of the author is relevant. Addison Hodges Hart was an Anglican clergyman who joined the Roman Catholic Church in 1997, and was ordained to the priesthood. However, in 2011, he left the Catholic Church.

In a sort of ‘departing note’ in the form of a blog comment left on his brother’s blog (also an Anglican clergyman) on new year’s eve 2011, he dismisses the dogma of papal infallibility as an invention; rejects the eucharistic dogma of Transubstantiation as an “illusion” and “scholastic nonsense”; the Immaculate Conception of Mary as an “unnecessary and unverifiable belief, if ever there was one;” and also rejects her bodily assumption into Heaven. For Hart, “Anglicanism is doctrinally sound and blessed with great forms of worship. Rome is neither.” His note drew the attention of priest and blogger Fr. John Zuhlsdorf.

Writing a first-person perspective novel on the antichrist is a clever and intriguing idea, but is obscured and never reaches fruition, because Hart persistently imposes upon the lips of the characters his own grievances and objections against the Catholic Church.

Biblically, parallels are drawn between the beasts and horns in the prophecy of Daniel 7, and those seen in Apocalypse 13. Then there’s several references to antichrists in the epistles of St. John. The writings of the church fathers are also awash with speculation, predictions, and biblical extrapolation on the antichrist.

In May 2020, the antichrist received a mention in an interview style biography of retired pontiff Benedict XVI, written by collaborator Peter Seewald:

“Modern society is in the process of formulating an ‘anti-Christian creed,’ and resisting it is punishable by social excommunication. The fear of this spiritual power of the Antichrist is therefore only too natural, and it truly takes the prayers of a whole diocese and the universal Church to resist it,” said Benedict.

The main character in the novel, Mr. President, is a former chief of the World Bank turned secretary general of the UN turned two-time president of the US. Satan has been hanging around for centuries disguised as a cardinal, grooming Mr. President to be the antichrist. Satan has him kidnapped by Vic (Mr. President’s barber who is really a senior clergyman and disciple of Satan), and brought to his secret lair, and sets out his motives and plan with the final decision to take up the role or not, left to Mr. President.

In Hart’s novel, Satan has been living within the Catholic Church for centuries, calling himself Cardinal Fieropasto (Italian for ‘vicious meal’, and found in canto 33 of Dante’s Inferno). The Church hierarchy, once it realized who Cardinal Fieropasto really was, decided to “shield one of their own.” Satan is now a “respected” cardinal, which is a “matter of ongoing acceptance, concealment, and even amusement” among the cardinals.

Hart tells us that Satan has kept the hierarchy at bay for the last 500 years, “tied up with matters of theology and canon law and preoccupied with its own survival,” rather than Jesus’ true teachings, which read like a tired anti-Catholic trope used by any number of Protestant start-ups. The antichrist-designate ponders and reinforces Satan’s boast: theology exists to get around the sticky problem of Jesus’ teaching, he says to himself.

In other parts of the novel, there appear subtle insights into the deceptiveness of evil. For example, Cardinal Fieropasto (a.k.a. Satan), holds forth on his views of Jesus as intriguing, admirable, a messiah figure he wanted to help with his triple temptation in the desert, but ultimately a figure of ineptitude with high ideals which have proved impractical and soppy. With the preparation and appointment of the antichrist, Cardinal Fieropasto wants to give the world the true peacemaker-savior, who rules with power and governance, rather than the sentimental ideals of Jesus.

However, wicked cardinals on the side of Satan, recourse to Christ’s temptation in the desert, and a supposed desire for a universal kingdom of peace all bear a striking similarity to Dostoyevsky’s grand inquisitor in The Brothers Karamazov. The grand inquisitor (generally a bishop or cardinal, with the most famous being a Dominican friar) has Jesus arrested, put on trial and berated for refusing the temptations of Satan in the desert. The inquisitor then confesses that ‘they’ (the leaders of the Church) have been on the side of Satan for eight centuries, accepting the triple offer which Jesus rejected, with the ultimate aim of a universal kingdom of peace. Coincidence with Hart’s portrayal?

Hart redeems Satan and the masons?

In a disturbing, but clearly theologically motivated move, Hart gives the reader something of a detailed explanation of Origen’s writing on apocatastasis, specifically an understanding of salvation that would include the restoration and salvation of Satan and the devils. Scholars still debate whether or not Origen held this view.

However, in this novel Jesus agrees with author Hart. In the closing chapter, Hart, speaking to us through Jesus, tells us that at the Second Coming, Jesus is going to be the “tempter” of Satan and offer him the chance of redemption, whom he refers to as “the prodigal.” All this is weird, and done to push a theological agenda, but comes as little surprise.

Addison Hodges Hart is no other than the brother of David Bentley Hart, perhaps the leading universalist theologian in the world, and author of That All Shall Be Saved: Heaven, Hell, and Universal Salvation, and even provides a written endorsement of his brother Addison’s novel.

Saving Satan not being enough, Hart also wants to attempt another unexpected act of redemption. Our antichrist-designate, a freemason no less, tells readers that the Catholic Church’s fear of secret societies is “hysterical and overwrought, as freemasons are about as conniving and dangerous as the boy scouts”, even though several centuries of papal teaching, Vatican condemnations, history, confessions by ex-masons, and scholarship, would suggest otherwise.

Then there’s the unfortunate caricature in Br. Antonine, OP. He’s portrayed as a young, old-fashioned, traditionalist Dominican, who thinks Vatican II is a mistake, rejects the current pope’s liberal tendencies, and works for the Congregation for the Doctrine of the Faith – a veritable king-size bagel of clichés. And of course, Br. Antonine reads St. Thomas Aquinas and Fr. Reginald Garrigou-Lagrange, OP. Br. Antonine is all the things Hart has come to reject as an ex-Catholic.

What’s more, Br. Antonine is tasked with striking a deal with the antichrist: encourage him to take up the antichrist role, knowing full well the catastrophe that awaits, but please,  spare the Church and its property, bargains Br. Antonine. Of course, young trads are only really concerned with reading the right books and preserving nice church buildings, or so Hart wants the reader to think?

More established literary works readers might find of more interest and use include The Pope and the Antichrist, by England’s Cardinal Edward Manning, based on lectures given in 1861; Lord of the World by Msgr. Robert Hugh Benson, published in 1907; and the two-part Father Elijah: An Apocalypse (1996), and Elijah in Jerusalem (2015) by Canadian Michael O’Brien.

There’s also Russian philosopher and theologian Vladimir Sergeyevich Soloviev, whose final book before his death in 1900 was The Three Dialogues and the Story of the Antichrist. It was he who popularised, via the late Italian Cardinal Giacomo Biffi, the figure of the antichrist as a pacifist, environmentalist, and ecumenist who is elected president of the United States of Europe (remember, his book was published in 1900). Like Bishop Fulton Sheen’s 1947 radio broadcast on the antichrist, it’s the sort of thing we’d call ‘prophetic’ in describing the lay of the land today in terms of geopolitics and the values touted by civic and religious leaders.

Reading Hart reminded this reviewer of elementary school fiction writing, which came with the teacher’s warning to the class not to end stories with, “and then I woke up and it was a dream” – a common sin among eight-year-olds.

The opening chapter begins with a dream – Prague, racing around on a scooter, a mysterious woman, an actor who played Dracula in a film – all very forgettable as the story continues, and seemingly having little relevance to the rest of the book.

The cliché sandwich continues, with closing chapters filled with sudden black-outs, a car skidding on ice and a march through the snow with Vic (copying Dante and Virgil’s trek through the ice of Canto 34, out of hell, perhaps?), and then we’re suddenly and mysteriously transported to the Middle East for an encounter with Jesus.

The author packs in as many clichés as each sentence will allow: Jesus is wearing sandals (of course), and has a flock of sheep nearby (what a surprise), offers our protagonist some bread (symbolic!). Deciding that he doesn’t want to be the antichrist, the protagonist and Vic whip out a couple of cigars and light-up to celebrate, reminiscent of that Catholic classic, Top Gun.

But if all that wasn’t enough, the protagonist then suddenly wakes up in bed – again! Has it all been a dream, did he really meet Jesus, where is he now – and will readers care? To boot, there are several examples of misuse of Our Lord’s name throughout the book.

There will continue to be no shortage of writers yearning to vent their spleen through the plots and characters they concoct, in the spirit of Hart. And the figure of the antichrist and his war on the Church will continue to fill the imagination and move the pen of popes, saints, mystics, theologians, and novelists down the centuries, until we arrive at the “Love that moves the sun and the other stars.”

Confessions of the Antichrist (A Novel)
By Addison Hart
Angelico Press, 2020
184 pages

The Prefect of the Secretariat for Communication of the Holy See has a communication problem. Specifically, he has a hard time telling the truth. […]

From Temptation to Transfiguration

Weeds, Seeds, and the Kingdom of Heaven