Sister Theresa Aletheia Noble, F.S.P. is a former atheist who is now a religious sister with the Daughters of St. Paul. She lives in Boston, where she serves as an editor for Pauline Books and Media, and is herself the editor of the Memento Mori prayer book series focusing on the four last things of death, judgment, heaven, and hell. 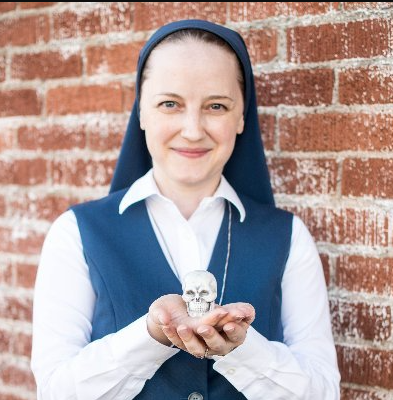 I recently interviewed Sister Noble by email about the topic of death, a traditional focus of Catholic prayer during the month of November, and its role in our current post-COVID world. The transcript of our interview is below.

CWR: During the month of November, Catholics traditionally pray to and for the dead, visiting cemeteries in addition to celebrating All Saints and All Souls Day. Why do Catholics focus so much on death in this way?

Sister Theresa Aletheia Noble: For Catholics, death is illuminated by the life, death, and resurrection of Jesus Christ. Christ has overcome death. So, Christians don’t just remember the dead, we believe that our prayers make a difference in the afterlife. Pope Emeritus Benedict XVI wrote, “That love can reach into the afterlife … has been a fundamental conviction of Christianity.”

So, I wouldn’t say our focus is on death per se, but that’s how it can appear. For us, death is pregnant with life and with love because of what Christ has done for us. Our prayers for the dead reside in this paradoxical place of Christian hope in death and the source of their efficacy is in the power of the Cross.

CWR: The ongoing COVID pandemic has increased anxiety among people about death. How might praying with death help us overcome our fears about it?

Sister Theresa: Whereas we might normally be able to ignore death and push it from our minds, reminders of death are now ever-present. It’s a quality of human existence to experience the anxiety of death and the pandemic has raised this anxiety to the surface of everyday life. This is not necessarily a negative consequence of the pandemic. Exploring our fear of death in the context of our faith can be a great opportunity for grace. Fear of death is understandable; our existence is good and, as St. Ambrose wrote, “Death was not part of nature; it became part of nature.” Death comes from sin. We would be foolish not to fear death at least in some sense. However, at the same time, in On the Incarnation, St. Athanasius describes the disciples of Christ as those who “despise death.” So the question becomes, how can we move from this natural fear of death to this fearlessness that is the mark of a Christian? We can only despise death and lose our fear of it by meditating on our inevitable death regularly in the context of what Christ has done for us.

CWR: This year, we may be grieving not only the death of our pre-COVID routines and relationships, but the death of our illusions of political unity. In what ways might praying with death help us accept the imperfect reality of our country being about equally divided on the Biden-Trump election?

Sister Theresa: In my view, the political division we are experiencing is the result of the natural decline of a relativistic society that is struggling to find ways to discover truth together. However, no matter where this division leads, our assurance is not in the stability of our country’s government; it’s not in our nation’s privileged status in the world, and it’s not in any political candidate. The only rock and refuge in our lives is God himself. Meditation on death can root us in the stability and firmness of the love of God and this helps us to navigate the troubles of this life. The practice of memento mori or meditating on one’s death is a practice that puts life in perspective. St. Elizabeth of the Trinity wrote, “We see the true value of things by the light of eternity. Oh, how empty all is that has not been done for God and with God! I beg you to mark all your doings with the seal of love; it is the only thing that lasts! . . . What a serious thing life is!”

CWR: How do you pray with death in your own life during this difficult year of quarantines?

Sister Theresa: I am on my third year of praying with my death each day and I definitely have felt my inadequacy this year. Since my journey with meditation on death has been quite public, people have turned to me for wisdom and guidance this year but I still feel very much like a beginner in this practice. What I have learned over the past three years is simply that, although it’s very powerful, meditation on death is not magical. It has changed my life in many ways but, like the rest of the spiritual life, there are valleys and hills in meditation on death and traversing the valleys is just as important as climbing the hills. But I think embracing those moments of humiliation and fear is part of this practice. We die to ourselves and to our pride in the process of praying with our death in order to really give ourselves over to grace.

CWR: How have your own beliefs about death changed since you returned from atheism to Catholicism?

Sister Theresa: I was a materialist atheist for over a decade. For example, I did not believe in the immortal soul. But I was also an animal rights activist and often was unsettled by the implications of this worldview taken to the extreme. I was a strict vegan, but I could never accept what many animal rights’ activists argue, that speciesism—a blind prejudice for one’s own species—is the only reason human life is inherently more valuable than animal life. I wrestled with this problem and others for years until I had a conversion experience while I was traveling in Costa Rica. My experience of God in that moment eventually led me back to the Church and then into the convent.

Intellectually, I accepted the teachings of the Church around the afterlife after I entered the convent but it really was through the practice of memento mori that I began to understand and embrace it more entirely. Not everyone has my background but I think many Catholics are practical atheists, especially in terms of the afterlife. So I think this practice can be helpful to many people in order to really mull over and digest the mysteries of our faith.

CWR: If you could pick a patron saint of death, who would it be and why?

Sister Theresa: I could choose so many. All of the saints were focused on their death in some way because they were focused on living for union with God. Our sisters, the Daughters of Saint Paul, are beginning a podcast and our first full episode is actually going to be about “memento mori saints.” So I hope people will check it out! They can find out more about what our sisters are up to online at thedaughtersproject.com and they can find the podcast on any streaming platform under the name “The Daughters Project.”

CWR: Other than placing the dead Jesus on a cross at the center of our worship spaces, what’s distinctive about the Catholic perspective on death?

Sister Theresa: The Catholic faith is very incarnational. I would argue that this allows us to more effortlessly see spiritual realities in the material than other faiths. Our faith makes it easier to understand that the material ending of our body—which leads to death, decay, and rot—has a further ending in the resurrection: “Thus, says the Lord God: Look! I am going to open your graves; I will make you come up out of your graves, my people” (Ez 37:12).

CWR: What do you hope people take away from your work in death?

Sister Theresa: The phrase “memento mori” has become more and more familiar to Catholics in the past few years, in part maybe because of my efforts to talk about it publicly online and in my books. My concern, however, is that for some Catholics memento mori is a trendy phrase rather than a real spiritual practice. Daily meditation on death is not glamorous or cool; it’s penitential. Actually taking up the cross of daily meditation on death is far more difficult than talking about it but it also has far more spiritual fruits.

About Sean Salai 13 Articles
Dr. Sean M. Salai, D.Min, is the culture reporter for The Washington Times. A former Jesuit, he holds a doctorate in evangelization and digital media from The Catholic University of America and is an author of multiple books on Ignatian spirituality.

There is no need to belabor the awfulness of the year of lockdowns, shutdowns, and other downers that began in mid-March 2020. Among the failures that will bear serious scrutiny going forward are those of […]

The End of the World Again

We used to keep death close, even stare it in the face: the skull on the desk beside the book, the graveyard right next to the church, crypts under the floors where we knelt. We […]

A Time to Read Nicolas Diat’s “A Time to Die”

In the age of COVID-19, death has become a daily subject around the dinner table, in the grocery store, and at a social distance even at the gas station. We are now constantly reminded in […]