America is in crisis. Beyond the trials and tribulations associated with COVID-19, there is rioting in the streets and calls for the “rebranding” of the United States in terms of identity politics. These are times in which the very history of America is being questioned and in which heroes, such as those who founded the nation, are being demonized and derided. The very meaning of what it is to be an American is being questioned. 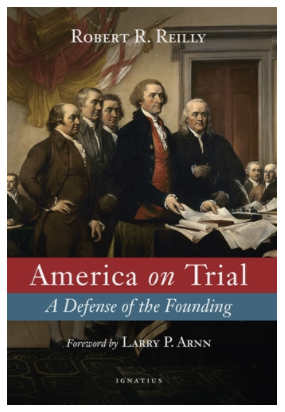 In the shadow of these attacks on the integrity of the United States, a leading scholar and former special assistant to the president has stepped forward to defend the American founding. Seeing the founding principles of the United States as part of natural law tradition, dating from the ancient Greeks, Robert R. Reilly has shown how the Founding Fathers saw themselves and the nation they were creating as part of the living tradition of Western civilization.

Robert Reilly is uniquely qualified to comment on the current crisis. He is the director of the Westminster Institute, established in 2009 to promote individual dignity and freedom for people throughout the world. He also has 25 years of government service. Reilly has served as director of Voice of America, was senior adviser for information strategy to the secretary of defense, and has taught at National Defense University. He has written and published widely on American politics and foreign policy. His books include The Closing of the Muslim Mind: How Intellectual Suicide Created the Modern Islamist Crisis.

In the following exclusive interview with The Epoch Times, Mr. Reilly, author of America on Trial: A Defense of the Founding addresses, by email, the issues that have been ripping the nation apart.

Joseph Pearce: Mr. Reilly, your book has been published at a time when many people are questioning the very foundations of the United States. How would you respond to those who see nothing worth celebrating on the Fourth of July?

Robert R. Reilly: I would respond that they are committing colossal acts of ingratitude and impiety. By what standard of worth would they find nothing worth celebrating in the very thing that provides them with their freedom?

Mr. Pearce: At a time when statues are toppling, including statues of the Founding Fathers and of former presidents of the United States, how can we make a reasoned defense of the founders and of the founding principles of our nation?

Mr. Pearce: Much of the identity crisis that many Americans are experiencing is due to the acceptance and embrace of relativism and the demands for radical self-autonomy, which is a logical consequence of relativism. What do the Founding Fathers say about relativism?

Mr. Reilly: Moral relativism is antithetical to the American founding, which relies on transcendent, immutable truths as in “the Laws of Nature and of Nature’s God”—for its justification. “That all men are created equal” is articulated as a moral principle in the Declaration of Independence. Either that is true universally, at all times, for all peoples, and you can therefore have something like the American Republic, or it’s not, and you get something like Nazi Germany, the Soviet Union, or communist China.

Mr. Pearce: How would you respond to Justice Anthony Kennedy’s statement in Planned Parenthood versus Casey (1992) that “at the heart of liberty is the right to define one’s own concept of existence, of meaning, of the universe, and of the mystery of human life”? Can Justice Kennedy’s understanding of liberty be reconciled with the concept of liberty expressed in the Constitution?

Mr. Reilly:  The founders would have found completely objectionable Justice Kennedy’s misunderstanding of freedom. The idea of freedom as contentless choice was totally alien to them, as would be the idea that liberty is the right to define one’s own meaning of the universe. For them, the meaning of the universe originates not in ourselves but in “the Laws of Nature and of Nature’s God.” Man’s obligation is to conform himself to those laws. That is what leading a moral life means. The Founding Fathers were unanimous in saying that the success of the American Republic was wholly dependent on the virtue of the American people, and that it could not survive without it. Much less could it endure the erasure of the distinction between virtue and vice, which is what Justice Kennedy’s nonsensical statement achieves.

Mr. Pearce: You write that the whole crisis is based on two opposing conceptions of reality, whether it’s constituted by reason or by will. What’s the difference between these two conceptions and why is it so important?

The key issue, including in theology, is: Does the will follow reason, or does reason follow the will? Everything hinges on the answer to this question. Either the intellect directs the will, and the will then acts in accord with reason, or the will is in charge and reason becomes the servant of the will. There are huge political ramifications to this issue. As French writer Bertrand de Juvenal said, “The man who finds in God before all else will and power, will be disposed to the same view of human government.” If reason is primary, you get things like natural law and the rule of law as reason. If the will is primary, you get things like tyranny.

Mr. Pearce: You quote Robert Bellarmine as saying that “a bad law is not a valid law.” If this is so, what constitutes a good law? How is the validity of the law to be judged?

Mr. Reilly:  The validity of law is judged in accordance with its conformity to natural law. Another way to state this is that a bad law is not reasonable. Let me expand upon this from my answer to the preceding question. If God in his essence is Logos or Reason, then one must have reasons for law because law is Reason at the very source of creation. Therefore, the constitutive element of law is not will, but reason.

Reason is obligatory in man’s behavior and in his laws because it exists in nature’s order and as the law of God’s essence. That’s why bad laws are defined as unreasonable. Bad laws are a reflection of the primacy of the will over reason.

Mr. Pearce: John Locke, who was a major influence on the founders, stated that “the taking away of God, even if only in thought, dissolves all.” What did he mean by this? How important is it that the United States remains “one nation under God”?

Mr. Reilly: In the “Second Treatise,” Locke wanted to demonstrate the inviolability of the human person as God’s property. “For men being all the workmanship of one omnipotent and infinitely wise Maker; all the servants of one sovereign Master, sent into the world by His order and about His business; they are His property, whose workmanship they are, made to last during His, not one another’s pleasure.”

Like his predecessors, Locke believed that human life is sacrosanct because of its provenance. Obviously, man’s life cannot be sacred unless there is a God to sanctify it, which is why Locke was so adamantly insistent on God’s existence. This also helps explain Locke’s revulsion at atheism: “Those are not at all to be tolerated who deny the being of God. Promises, covenants, and oaths, which are the bonds of human society, can have no hold upon or sanctity for an atheist.”

Locke maintained that “the belief of a deity is not to be reckoned amongst purely speculative opinions, for it being the foundation of all morality, and that which influences the whole life and actions of man, without which a man is to be counted no other than one of the most dangerous sorts of wild beasts and so incapable of all society.”

The “infinitely wise Maker” is also the guarantor of man’s equality, as no one is any less the workmanship of God than anyone else. This is the sacred basis of equality in Locke, as well as in the Declaration of Independence.

I would only add that the Declaration mentions God four times. It is no exaggeration to say that American independence was based on dependence on God. When I mentioned that the American founders were unanimous on the necessity of virtue, I should have also said that they all agreed that religion was the principal source of virtue. Should Americans today think that they are autonomous, no longer dependent on God, then they should prepare for what prior attempts at total human autonomy have produced: the Great Terror of the French Revolution and the charnel houses of the Soviet Union, Nazi Germany, and communist China.

Mr. Pearce: You claim that “failure is written into the DNA of the modern project.” What do you mean by this, and why is it a cause for hope?

Mr. Reilly: Radical modernity and its project for man’s total self-sufficiency is parasitic. It will fail to the extent to which it succeeds. It cannot survive its own erasure of natural law and Christianity. Paradoxically, the loss of faith and reason is a cause for hope. It proved the downfall of the Soviet empire, which imploded from its own hollowness. The West’s moral, social, and political implosion proceeds apace for similar reasons. Yet we can avoid the cataclysm anytime we choose to, by returning to reality, to reason, to “the Laws of Nature and of Nature’s God.” Reality is resilient because, as Plato said, it is “what is”—not whatever one fancies. Logos wins in the end.

(Editor’s note: This interview was originally posted on The Epoch Times site and is reprinted here with kind permission of that publication.)