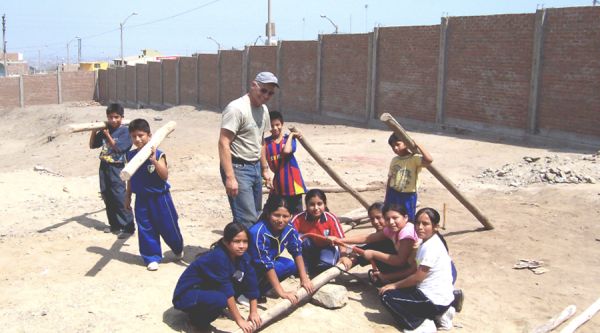 Denver Newsroom, Sep 10, 2020 / 12:23 am (CNA).- Boise, Idaho is one of the fastest growing boomtowns in the U.S. The state as a whole is increasing in population by 2% or more each year as more and more people come for the relatively cheap cost of living and natural beauty of the state.

But that population and prosperity boom is coming at a cost. Home prices and rents are soaring, and some residents teeter on the brink of homelessness as a result.

For Ralph May, executive director of St Vincent de Paul of Southwest Idaho, helping the poor is a task in which he finds great joy— and one which has brought him and his family to some of the most poverty-stricken areas of the entire world.

“I've always been driven by the Gospel message of 'Loving your neighbor as yourself.' It's just been a driver in my life, and I have felt inadequate at times, not even being able to come close to fulfilling that. But I've always been able to feel and touch God through other people, and particularly the poor,” he told CNA.

“That's a tenet of the Society of St. Vincent de Paul— that we need the poor to teach us, that we need to be taught and understand God through the poor. I guess I've felt that strongly from the very beginning, and I've been blessed to have had the opportunity to do something about that at times.”

Ralph is a cradle Catholic, born and raised in the small town of Wendell, Idaho. After getting a degree from the University of Idaho— where he met his wife— Ralph returned to Wendell to start a joint farming venture with his father. He and his father eventually built their partnership into a successful 1,100 acre farm.

At the same time, Ralph was very involved with their local Catholic parish, and also got involved in Cursillo, a Spanish lay community founded in 1944.

In 1997, Ralph heard about a Catholic orphanage in Tijuana, Mexico, that was in dire need of aid— a building falling apart, and many children suffering from disabilities and various illnesses, including a few that were HIV positive.

While many people of good will might be moved to pray or donate to try and help, Ralph had other ideas.

He remembers thinking at the time: “There's no other choice. We have to go.”

As soon as the school year ended, the whole May family, including the kids, drove down from Idaho to Tijuana, working for five days at the orphanage doing as much as they could to help.

When they left to head home, Ralph said they vowed to come back the following October, which they did, leading an extensive renovation of the entire orphanage upon that second visit.

Ralph even worked out a deal to bring the sisters and kids from the orphanage to Idaho for Christmas one year. He estimates he made nearly 30 trips to Tijuana over the next six or seven years.

It was around this time that Ralph realized he had the heart of a full-time missionary. So he left his farming partnership with his father, and he and his wife, Theresa, set about changing their career paths.

Ralph and Theresa wanted to learn Spanish, so they moved the family to Cochabamba, Bolivia in 2003 for a three-month intensive language course.

Eventually, the family landed in a very poor area of Peru, near the large city of Trujillo. The area was very dangerous at the time, with high crime, no paved roads, most houses having only a dirt floor, and water available only once a week.

In terms of the Catholic community, there were 180,000 people living within the local parish boundaries, which had one main church and 5 small chapels spread throughout the area. Ralph started building gardens at all of them, and Theresa did a lot of youth ministry and music ministry work for the parish.

A large Catholic school, run by Spanish and Peruvian nuns, recruited Ralph to teach horticulture classes to the kids three times a week, which he did for the next two years.

Eventually Ralph paired up with another Catholic to form a nonprofit in Peru. He would go house to house to figure out the most critical needs for each poor family, and then recruited services to come in and help the poor neighborhoods. He also liased between university students who wanted to do service and the poor neighborhoods that needed their help.

His organization supported working mothers, teaching them skills such as cooking, and classes on how to build businesses. They also launched seven medical campaigns, bringing in doctors, dentists, and psychologists to poor villages and neighborhoods.

Another project they undertook involved the hiring of local people to collect garbage and plant over 2,000 trees in the community.

After a brief vacation in Europe, the family returned to the Peruvian jungle in 2011, and bought a dairy farm there which eventually became very productive and successful.

“It was such a beautiful experience to be with these humble people in their time of need,” Ralph said of his time in South America.

Family matters— including Theresa’s mother being diagnosed with cancer— led the family to come back to the U.S., to Boise, in 2015.

Teresa began working as an accountant, and Ralph took a “vacation” of several months, laying low and working in their garden.

Eventually, he started volunteering with the Red Cross, helping with disaster assistance, rising to the position of logistics manager for the region.

Then, in 2016, Ralph met a woman who was volunteering with the Red Cross as a nurse, who was also the incoming president for the Society of St. Vincent de Paul (SVDP) for the area.

St. Vincent de Paul has around 4,400 locations across the U.S., falling into two main categories— conferences, which are associated with parishes; and councils, which are organized roughly at the diocese-wide level and tend to be bigger operations with more partnerships.

Ralph started doing some special projects for SVDP, starting a ministry for men and women coming out of prison— a ministry he had never done before, but which he very much enjoyed.

‘We can do something about this’

In southwest Idaho, Ralph says, a lot of people are new to the area and don't have community ties or friends to support them, which provides a good opportunity for SVDP volunteers to act as good neighbors for those in need.

Ralph says even though he has been away from South America for five years, his experience working with the poorest of the poor there has given him valuable perspective.

When he approaches the poor in the United States, his knowledge and experience from working in Peru “allows me to continue to roll up my sleeves and say ok, we can do something about this.”

The poverty he encountered in South America is “so much graver” than the poverty he generally encounters in the US, he said. In Peru, there are fewer resources available in the communities, and it is much more difficult to make a real difference.

In contrast, there are many good people and nonprofits in Idaho that are willing to answer SVDP's pleas for resources. That simply didn't exist in Peru, he said.

“I have never felt despair here, working with the poor. There's a lot of poor, and in their circumstances it is grave. But I think that perspective has been a very strong thing and a very good thing in my life.”

At SVDP, Ralph says, the biggest things they do is rental and housing assistance, working to prevent homelessness. They also provide clothing and household goods, and do home visits to the elderly— though during the pandemic they have adapted to doing patio visits or regular phone calls.

SVDP also runs five food pantries throughout the state that serve some 1,500 families a month. When COVID-19 hit, Ralph says their pantry converted to drive-thru service.

Ralph says SVDP Southwest Idaho has provided at least half a million dollars in direct aid in the last year, handling some 40-60 calls per day.

Despite the continued challenges of the coronavirus and changing demographics, “we're on a great path these days,” he said.

Springfield, Ill., Jun 18, 2018 / 02:16 pm (CNA).- For Catholic high school students on their way to college, faith runs the risk of being lost in the shuffle of new roommates, classes, studying, and activities.