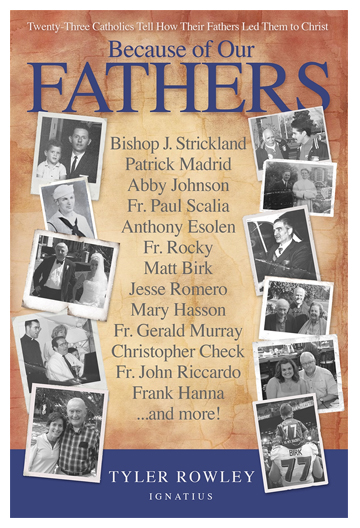 You never would have guessed those things about my father because, as a Christian, he cared far more about others than talking about himself.

My father grew up Catholic, the son of second-generation Polish Americans. A child of the Sixties, he developed a lukewarm relationship with the Church. I think the suffering he both experienced and witnessed firsthand finally led him back. In the 1980s he became what he called a “born again Christian,” and he and my mother began attending both Evangelical and Catholic churches. In the 1990s, my parents made a clean break and we were thereafter an evangelical Protestant family.

As I grew up, Jesus increasingly became the centerpiece of my father’s life. I remember that every morning he would go into the darkened family room, get on his knees, and pray for his family. He and my mother began attending (and then leading) their own Bible studies. He devoured Christian literature and swapped his classic rock radio station for Christian radio. He sought to evangelize anyone who would listen, including his physical therapy patients.

God was everything to him. My mother and I were a close second. In the 1980s he abandoned his very successful private practice, one that would have made him a millionaire in a few short years, in order to spend more time with me. Practically every weekend he was pitching baseballs to me in the front yard. He was proud of my academic and athletic successes, but merciful and compassionate in my failures. He had many personality flaws, but he worked hard to blunt them and was a faithful husband to the day he died of cancer at age 63.

I thought much about my father when reading Tyler Rowley’s new book, Because of Our Fathers: Twenty-Three Catholics Tell How Their Fathers Led Them to Christ. In the introduction, Rowley reminds us of the critical importance of fathers. He wisely quotes the angelic doctor St. Thomas Aquinas: “The father is the principle of generation, of education, of learning, and of whatever pertains to the perfection of human life.” He cites St. John Paul II in Familiaris Consortio: “In revealing and in reliving on earth the very fatherhood of God (c.f. Eph. 3:15), a man is called upon to ensure the harmonious and united development of all the members of the family.” The great Polish pope was himself raised by a devout Catholic widower.

Rowley also reminds us of how terrible things often go when fathers are absent or negligent. Fatherlessness leads to increased rates of suicide, abortion, immoral sexual behavior, crime, adolescent pregnancy out of wedlock, and domestic violence, among other vices. Moreover, according to an oft-cited study from Switzerland, if fathers are not regular church-attenders, the likelihood their children will be religious drops precipitously—even if the mother is devout. And we have been witnessing that crisis play out in the United States for a long while. Since 2000, more than fourteen million Catholics have left the faith, parish religious education and Catholic school attendance have tanked, infant and adult Baptism numbers have dramatically declined, and the number of sacramental Catholic marriages have been almost cut in half.

If those numbers aren’t emblematic of the widespread failure of Catholic fatherhood, I don’t know what is.

Thus Rowley’s compendium of twenty-three stories by Catholics about their devout Christian fathers is most welcome. There are names many Catholics will undoubtedly recognize: Bishop J. Strickland, Patrick Madrid, Abby Johnson, Fr. Paul Scalia (son of the late Supreme Court Justice Antonin Scalia), and Anthony Esolen. And then there are stories of less famous members of the Church, such as a married mother of two who works in finance at Michigan State University. All are worth reading, because they provide narrative proof of the data: children who grow up witnessing their fathers being devout and moral will be far more likely to exemplify those traits themselves. “Without my father, I would not be writing these words now,” says the prolific Esolen. You and I both!

When fathers invest in their children, not only with their time, energy, and emotions, but with a humble spirit of Christian piety, they make an investment that simply cannot be calculated. Do you think Karol Wojtyła Sr. had any idea his son would become one of the most influential, most beloved men of the twentieth-century, and perhaps one of the greatest popes the world will ever know? What he did know was that his allegiance to God and to his family demanded he offer himself as a gift to Christ and his children. Thank God he fulfilled that obligation.

Of course, that’s a remarkable example. But being a godly father is remarkable, even if often “normal”. What the stories in this book indicate is that without the humble, persevering witness of Christian fathers, our society will continue to crumble. We need fathers to raise men who become great priests like Fr. Paul Scalia, Fr. Gerald Murray Jr., and Fr. Hezekias Carnazzo. We also need them to raise pro-life writers like Alexandra DeSanctis, stay-at-home mothers-of-four like Megan Collier Reilly, and Catholic book writers like Tyler Rowley himself. Saints come in many shapes and sizes.

“Ponder your ancestors,” Rowley exhorts the reader. “Think about the lineage of devout men that spans your ancestral tree…. Why are you letting that faith fade, not just from your family’s tradition, but more importantly, from your children’s lives?” Perhaps because of my love of the past (I’m a former high school history teacher) and because of my Southern identity (for better or worse we tend to honor and mythologize our ancestors), that question deeply resonates with me. Sadly, I think Rowley and I are rarities in a culture that sits in illogical, self-defeating judgment of our forefathers, what I’ve elsewhere called America’s odium patrum. If we don’t outright condemn our Catholic heritage as patriarchal oppression, we shrug our shoulders and say “that’s just not for me,” and get back to watching the game or bingeing on Netflix.

Men must overcome not a few obstacles to realize the true kind of manhood and fatherhood exemplified in Rowley’s book. Public education and the media condemn men for their “toxic masculinity,” a sure-fire way to shed their ever-thinning skin. Corporations exploit mens’ loneliness and declining sense of self-worth by getting them addicted to pornography and video games (both of which, ironically, reinforce those negative feelings). Many seem to think, bizarrely, that the greatest threat to America’s well-being is the confident, heterosexual male.

Perhaps, then, this book isn’t only an exhortation for men to “play the man” and discover true, authentic, masculinity. It is also an apologetic to those who think conservative, Christian men are the problem, rather than a solution to our current distemper. For those who blame America’s problems on “the patriarchy,” I’d be happy to direct them to what the future of an America bereft of godly Christian men looks like. Just go to any riotous, secular college campus, or better yet, watch the street violence that, even when police are pulled back, continue to plague our cities.

George Will once observed: “Parents who have raised sons understand that civilization’s primary task is to civilize adolescent males.” Thank God my father understood and executed that mission, however imperfectly (readers, I suppose, can judge for themselves). I pray, in turn, to do the same for my now two sons. St. Joseph, and every other godly father, pray for us!

Because of Our Fathers: Twenty-Three Catholics Tell How Their Fathers Led Them to Christ
Edited by Tyler Rowley
Ignatius Press, 2020
Paperback, 206 pages