One of the aims of the original New Formalism (now nearing forty) was to reclaim some of the ground ceded by the poetry of the last two centuries, which has been dominated by the brief lyric. Verse, it was argued, is capable of much wider utility than is currently on offer. The capacity for storytelling sticks out as one of the biggest losses as the novel replaced the poem as the popular narrative medium sometime in the mid-19th century. Apart from the use of meter and rhyme, narrative poetry is a major hallmark of New Formalism. 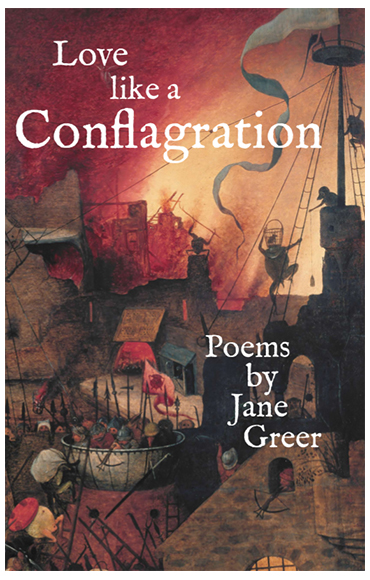 However, there are still more as yet under-explored modes. Jane Greer offers us one such exploration in Love Like a Conflagration. Though this collection contains many elegant lyrics, it prefers to challenge the reader with didactic and devotional poetry. Even as Christian publishers are taking an increasing interest in poetry, there is a conspicuous lack of true and high-quality devotional poetry. Greer’s collection is refreshingly free of constant doubt and tortured confessionalism. However, when she points the finger at others, which is often enough, she does not spare herself in the condemnation. A good many of these poems have a discernible “moral.” This is a risky move and it will surely ruffle the feathers of readers who wish to be delighted without instruction. Greer pulls this off more often than not, but when she fails it can sound something like punditry-in-meter. Consider the opening poem “Micha-el,” whose would-be prophetic tone is dampened by blunt, clunky haranguing:

Don’t act as though the game’s been played unfairly:
He’s never skimped on prophets since he breathed you
out of the mud and on your way to Heaven—
yours for the asking—

but you were too intent on what you’d crawled from.
You can’t begin to dream what you’ve rejected,
what we would give to need his fierce salvation,
require his dying…

The poem is saved somewhat, but not enough to count, by its speaker being St. Michael and not the poet. This still does not give license for lines like “Yes, say your prayers now.// This is your Precious Moment, I it’s angel.” This lack of taste and compassion is unfortunate as it is uncharacteristic. The title of the book comes from this poem and it is meant to evoke a kind of purging love (“Our God is consuming fire”). Contrast “Micha-el” with “The Adulterer in Hell.” Sure, the title is a bit on the nose, but so is Inferno. Here Greer moves with a high lyricism, charity, and understanding that marks the best of this collection.

Those were enchanted years
when love was reason enough for love,
and dreams were prodigal without remorse.
What was there left to have

Save heaven? We would yield,
But slowly, make delicious Death
court us even as we caught our breath
at the joy Death held.

Here we have a nonce form (invented by the poet) of stanzas of varying line length (three feet followed by four, five, then three). Though why the rhyme scheme established in the first stanza is not followed (it changes from ABABA to ABBA), I cannot say. These opening stanzas announce the book’s main preoccupation—love and lust in their varying guises. Greer shows us how the damnation of these two lovers begins, not at their judgments, but during their affair. In C.S. Lewis’ vision, hell begins on earth and is carried into eternity.

Sensual, fecund words pop up on almost every page, “stepping inside is what/ I desire, more than anything, to do”; “Her Green Desire” is “a wet green paradise”; after drinking bourbon she wonders “Whose supple lover on a silk pillow/ seizes the blood in a blaze like this.” In the poem “Her Green Desire” she takes as her guides through this particular circle of hell Francesca and Paolo, Dante’s famous damned lovers. In “Rodin’s Gates of Hell,” an ekphrastic poem after a relief sculpture depicting scenes from Inferno, Paolo and Francesca “fall/ eternally though they cling and clamber,/ lust and unfaithfulness their pall/ passion their torture to remember.” Dante, of course, gives his damned characters punishments reminiscent of their crimes, hence the term “poetic justice.” Greer takes her cue from Dante, but shows us what this punishment looks like on earth, how lust is a pall to carry even now:

Maybe he’s married, too; they could
deny the rude surging of their blood
for long, delicious months, suffer
gladly their secret pain…

There are also glimpses of grace, as in “In the Hot Courtyard”:

She touched his shoulder as we waited
thirsty as hell. He frowned. He balked.
But yes was transubstantiated,
water to wine, as we talked.

Judgment becomes mercy because they are both operations of the same love. For Greer, lust is hell because it is a poor imitation of heaven, the wedding feast. God is a pining lover in these poems, much like in the book of Hosea. We see this most clearly in the final stanza of “The Adulterer in Hell”:

All that’s left is the Word:
distant, sorrowful beyond measure
He who is Guest and Host at every pleasure
took our snubbing hard.

Love Like a Conflagration is refreshingly free of the claptrap that too often bogs down New Formalist writing. It is vernacular but not chatty. That is to say, it has the courage of its convictions; Greer summits Parnassus and is not ashamed of it. There are a few sonnets—that much-abused form—in the collection, but they don’t stick out. The book is probably too long, but this has more to do with the way books are sold these days than any choice made by the author. If we look back to the classic poetry collections of the last century, they have around thirty to forty poems. This one has sixty. With so much content vying for the reader’s attention, it is difficult for the best poems to stand out, to be lingered over, and to be gone back to. One poem in particular, “Holy Thursday,” risks being passed over. It is a litany reminiscent of ancient Irish prayers. Meditating on the foot-washing ritual, Greer is determined to see Christ in everyone.

Christ the child in the treehouse crying
Christ her daddy and his bad touch
Christ the losers who do not love me
and also those who love me too much
Christ the young brutes who bully my child
Christ all those who really mean well
Christ the serial killers and senators
and everyone I’m sure will rot in hell.

Greer understands the outrageous nature of the Divine Mercy as well as the high stakes involved in our choices—both to reject one another and to reject Christ, which as we see in this poem are one and the same. This poem risks being overlooked because of its baldness. Is it even a poem? It rhymes (sometimes) and is roughly metrical but it does not do much of what we expect a poem to do. There is no metaphor or metonymy nor is it highly lyrical. It does some things that poems are not meant to do. It is didactic and unambiguous. For its poetry, it relies solely on its truth-telling. It is a challenge to the way we define poetry. It is a radical carrying forward of the mission of “expansive poetry.” It is a prayer the reader might actually choose to pray. All this would be more evident if it wasn’t swimming in a thick soup of accomplished but less important poems. A book of poems is consommé, not chowder. “Holy Thursday” does have a few technical tricks to it, most notably in its last three lines:

Christ the communist Christ the queer
Christ the many who live to annoy me
Christ the sorry face in my mirror.

The poet signs her name (at one remove), as in the poetics of pre-literate societies, in the poem itself. The face in the mirror is Jane Greer, which rhymes more perfectly with “queer” than does “mirror.” Brava.

It is a rare thing for a poet to get a second debut. Though Love Like a Conflagration is technically Greer’s second book it is preceded by Bathsheba on the Third Day, which was published in 1986. In 1986 Ronald Reagan was president, a saint was pope, New Formalism was still new, and the present reviewer was not yet born. It is a different world. It is as if Yeats published nothing between The Wanderings of Oisin (1889) and The Second Coming (1920). The difference is we have nothing like the literary revolution Yeats witnessed. In our time, modernism continues to atrophy, producing nothing but shadowy carbon-copies of itself. We have no Waste Land to contend with, except the wasteland that is contemporary poetry. Greer’s book offers a corrective to the boredom that we have inherited. In ceding most of the function of our craft to other media, we have nothing left to do but stare at our navels and type up new (worse) ways to “Make it New.” Greer, in Love Like a Conflagration, has made new old forms. Use them.

Rediscovering the Form of Things: On My Work To Date

I would like to recall a scene of almost two decades past. I was in my first year of doctoral work and was studying, at home on a bright Sunday afternoon. I found myself reflecting […]

Speak, Memory: A review of All That Will Be New: Poems

The poet, literary biographer, and Catholic spiritual writer, Paul Mariani published his last book of poems, Ordinary Time, in 2019. Much of it written in the aftermath of his recovery from a brain tumor, the […]

The Best of Christmas Poetry: A Festive Garland of Verse

If I were to package together all my favourite Christmas poems, wrapping them up for my friends and placing them under the tree, which would I choose? Having asked myself this question, I set about […]