Historical fiction is an honorable literary genre and there is no shame in writing it. Unfortunately, America’s Revolutionary Mind by C. Bradley Thompson has been marketed as a genuine American history, rather than the libertarian fan-fiction that it is. 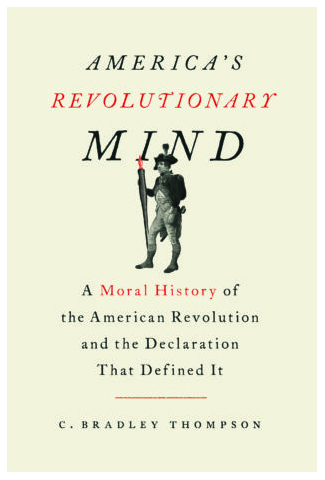 Thompson, a professor of political philosophy at Clemson University, could have written a good, or at least tolerable, history, but his ambition and ideology overtook his scholarship. Since his book was published last year, he has worked to keep it in the public eye, promoting his thesis that the “American Revolution and the Declaration that expressed it were the existential embodiment of the Enlightenment’s highest ideals.” Specifically, he argues that “America’s revolutionary mind is virtually synonymous with John Locke’s mind.” And, since Thompson sees the Constitution as a fulfillment of the Declaration, this means that the full Founding era is to be understood through Locke.

As is typical of historical fiction, there is some truth in this, but Thompson exaggerates and distorts Locke’s influence in order to construct an ideal libertarian version of the American Founding. That Locke’s thought influenced the colonial leaders of independence whom we now call the Founders, especially Jefferson, is not in dispute. One need only look at the famous opening passages of the Declaration of Independence, which Thompson does, interminably. But many other elements were also in play, with the Founders often engaging in a sort of political syncretism. A variety of sources—including Christianity (mostly Reformed), the English common law heritage, a long tradition of colonial self-government and an admiration for classical republicanism—informed colonial resistance to British rule and the subsequent establishment of the United States of America.

Thompson could have explored the role of Locke’s ideas amidst this multiplicity of influences. Instead, he reduced the complex history of American independence to a single philosophical narrative, defined by the Declaration, which in turn he defines as Lockean liberalism. For Thompson, the trick is to ignore or minimize other intellectual currents that shaped American independence and the Founding. In cases where this disregard is impossible, he seeks to absorb non-Lockean factors into his narrow narrative. This one-sided history obscures as much as it illuminates, and Thompson’s methodological sleights-of-hand are apparent long before the reader finishes slogging through the nearly 400 pages of text.

Consequently, Thompson gives his readers an inaccurate impression of American religion during the Founding era. He quotes sermons that include Lockean reasoning, but he passes over a multitude of examples that would complicate his narrative, such as praise for God’s providential guidance of the American cause and calls for the people to repent of their sins lest God withdraw his favor. As can be seen in Ellis Sandoz’s excellent collection of political sermons from the time, these themes of sin and providence were common. Most Americans were not Jeffersonian deists. Rather, they believed in an intervening, judging God who expected collective righteousness from His people in America. But Thompson seems uncomfortable with this reality and eager to write religion out of his account of American life. He does not discuss Reformed covenant theology and practice as an influence on American ideas of social contracts. And, perhaps most egregiously, Thompson excises Christianity from his discussion of the abolitionist movement, reducing it to Declaration-inspired libertarianism.

Likewise, Thompson downplays the influence and inspiration of classical republicanism on American leaders. References to antiquity abounded during the Founding period. The moral outlook of the Founders was Christian and classical, not Lockean, but Thompson ignores the Christian influences and only acknowledges the classical ones in passing. Colonial writers regularly adopted Latin pen names, most famously in the case of the authors of the Federalist Papers—which are full of references to Greek and Roman history, and almost devoid of Locke, who is not even mentioned by name, though other modern thinkers like Montesquieu are. This enthusiasm for antiquity spilled over into our government: we have a Senate not because it is demanded by Lockean political theory, but because Rome had one.

Thompson treats factors that he cannot ignore—such as the Americans’ common-law heritage, commitment to the rights of Englishmen and history of self-government—as merely preparatory for a Lockean consummation in the Declaration of Independence. In his telling, though the Americans may have begun by defending their ancient rights and liberties from British imperial encroachment, they became full-fledged Enlightenment liberals under the tutelage of Locke’s ideas, which they increasingly turned to as the confrontation with England escalated.

The Declaration itself is Thompson’s primary evidence for this revisionist thesis. He argues that the Declaration “brought together ideas and assumptions that had hitherto been incomplete, unclear, or discordant” and he therefore describes the Declaration as an “ideological road map” from which he is able to construct a “near-unified system of thought” that defines “America’s revolutionary mind.” Still, although he engages in extended exegesis of the document, he neglects its actual composition, the details of which undermine his case. Jefferson did not write it as a carefully-crafted philosophical treatise, but cranked it out on deadline, borrowing heavily from George Mason’s work while probably having a few drinks. Thus, interpreters should not overlook the possibility that, in some passages, Jefferson just winged it and wrote something that sounded good. Thompson is horrified at the thought, but there is indeed some “manipulative propaganda” in the Declaration.

Furthermore, had John Adams not handed the Declaration’s drafting off to Jefferson, the Americans would have still declared and fought for independence without the Lockean rhetoric Jefferson included. The purpose of the Declaration was not, as Thompson asserts, to “declare certain self-evident truths.” Rather, it was to declare independence. And though Thompson sometimes treats the Declaration itself as the cause of conflict with Great Britain, writing that its signers “heroically assumed full responsibility for the war that was sure to come,” he knows that it was not drafted until over a year after the war had begun.

Thus, a Lockean exegesis of the Declaration is insufficient to prove Thompson’s case. Perhaps sensing this, he undertakes extensive efforts to demonstrate that Locke’s political philosophy was the dominant mode of patriot thought. But aside from Jefferson and a few minor figures such as Ethan Allen (whom Thompson attempts to elevate as “one of America’s leading thinkers”), there is not much evidence that the Founders were “unadulterated Lockeans.” Thompson presents scant evidence that the likes of Washington, Madison, Franklin and Hamilton were committed to Locke’s philosophy. He does make a case that John Adams was impressed by Locke as a young man, but he has little evidence that Locke dominated Adams’ later thinking. Indeed, Thompson is reduced to purporting to discern a “disguised Lockeanism veiled in the more traditional language of English constitutional jurisprudence” in the revolutionary-era Adams.

It is true that Locke’s ideas were part of the intellectual mix of the time, and the references add up—here a sermon, here a pamphlet, here a newspaper article, here a speech—but what they add up to is less than Lockean hegemony during the Founding era. Thus, Thompson attempts to bolster his case by presuming that statements that sound Lockean were inspired by his philosophy and by treating favorable reference to Locke as an endorsement of his whole philosophy. Thus, he describes a group of “hardscrabble yeoman farmers” as “Lockean purists” even though they had likely never heard of Locke.

Perhaps, in Thompson’s mind, the principle of hermeneutic charity means reading everyone and everything in as Lockean a way as possible. But not even those who cited Locke as an authority necessarily understood his philosophy. Then as now, many Americans made a habit of referencing figures they little understood.

Additionally, not everyone who used phrases similar to Locke’s meant the same thing he did; there were many sources besides Locke for ideas about the rights of man, the nature of happiness, and the laws of nature and nature’s God. Most were more traditional than Locke, but a few were more radical. For instance, Thomas Paine’s Common Sense was more widely read and immediately influential than Locke’s work. But Thompson seems uncomfortable with Paine’s radicalism, as most Americans also came to be, especially when its implications became clear as the French Revolution devolved into terror and borderline genocide.

Perhaps Thompson views Locke’s philosophy as providing a golden mean between radicals such as Paine and the more conservative American patriots who saw themselves as defending their traditional rights, liberties and practices of self-government. But a golden mean is not the same as a dominant influence. Regardless, Thompson’s ideological reach exceeds his historical grasp. This is why the esteemed historian Gordon Wood, who has spent a career exploring the complexities of the Founding, provided the most diffident of back-cover blurbs, writing that Thompson’s book is a “bold new interpretation of the political and moral theory of the American Revolution. It is sure to be provocative.” Well, yes.

The provocation is not just the historical inaccuracy. Thompson’s project is history in service to ideology, and he exhorts his readers to embrace the libertarian or classical liberal ideals that he argues the nation was established upon. While Thompson’s ideology is less dangerous that others, it is still unsound. If the United States of America was founded on Lockean ideas, it was built on a philosophical foundation of sand whose collapse will likely lead to something worse.

The dangers may be seen in Thompson’s assertion that in the long-term, the Revolution’s effect “was to liberate men from unchosen obligations to each other.” Fortunately, this Luciferian independence and pride was far from typical of the Founders, who were neither moral libertarians nor believers in “radical individualism.” Moralistic legislation in the early United States was accepted and even expected; Americans did not believe in guaranteeing “to each and every person the freedom and the right to pursue happiness as he defines and seeks it.” Rather, they believed not only that the pursuit of happiness required virtue, but that government had a duty as a moral instructor and a restraint on evil, sometimes including prohibitions on private wickedness.

It must also be noted that Thompson’s Lockean liberal or libertarian ideology is not benignly neglectful of potential rivals. Liberalism is not neutral with regard to competing conceptions of the good. Thus, when Thompson concludes with an a epilogue that is indebted to the late Claremont scholar Harry Jaffa, it is a warning, as an examination of Jaffa’s work reveals that his liberal theory endorses the violent suppression and disenfranchisement of non-liberals. Political liberalism cannot keep its promise of neutrality between different worldviews. Locke, at least, was honest about the limits of toleration within his system (Catholics, for instance, were not included) in a way that his current apologists like Thompson are not.

Fortunately, America was not founded as a nation dedicated to Lockean ideology. We may enjoy the benefits of our liberal practices, such as the right to trial by jury, knowing that they have deeper roots than the shallow soil of liberal theory.

America’s Revolutionary Mind: A Moral History of the American Revolution and the Declaration That Defined It
By C. Bradley Thompson
Encounter Books, 2019
Hardcover, 584 pages

About Nathanael Blake 18 Articles
Nathanael Blake, PhD, is a Postdoctoral Fellow at the Ethics and Public Policy Center. His primary research interests are American political theory, Christian political thought, and the intersection of natural law and philosophical hermeneutics. His published scholarship has focused on Jean-Jacques Rousseau, Hans-Georg Gadamer, Alasdair MacIntyre and Russell Kirk. He is currently working on a study of J.R.R. Tolkien’s anti-rationalism. He writes from Virginia.
Xing