A new book by Christian Browne, The Pearl of Great Price: Pius VI & the Sack of Rome (Arouca Press), is a historical play that tells the true story of the invasion of Rome by Revolutionary France in 1798 and the arrest and capture of Pope Pius VI. Browne, an attorney and partner in a law firm based in Long Island, New York, recounts historical events, and his scenes are based upon first-hand accounts and actual documents published at the time. The book has been praised as “a literary pearl” by Joseph Pearce and a “very interesting and dramatic retelling of one of the most exciting events in the history of the Church” by Thomas Storck. 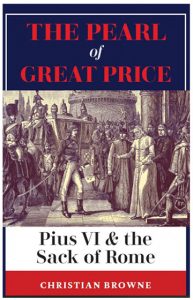 Christian Browne recently spoke with Father Peter M.J. Stravinskas about his book and the history that inspired it.

Father Peter M.J. Stravinskas, for CWR: Being an attorney by profession, how did you wander into the field of historical novels?

Christian Browne: I did not set out to write a historical novel. Like many other thinkers today, some years ago I became interested to consider how modernity became modernity. As I began to read and research, I was struck by how notions that developed in the Reformation and the Enlightenment eras plainly provide the foundations for so many of the assumptions that underlie the widely accepted modern worldview.

The French Revolution, especially, became a subject of fascination because in it we find the seeds of our modern life, both in the secular world and in the Church. In the wide sweep of the story of the Revolution, I discovered the amazing episodes concerning the lives of Pope Pius VI, and his successor, Pius VII. Their place in history is dramatic, shocking, and almost unknown today. I decided that I wanted to tell their stories and, thinking a bit about A Man for All Seasons, I decided to try my hand at doing it through fictionalized dialogue that was supported by accurate history from first-hand sources.

CWR: What captured your attention regarding this snapshot of history?

Browne: I was captivated by the idea that Revolutionary France had arrested and imprisoned two successive popes. This is hardly ever discussed, even within the Church. I realized that the Revolution’s attack on the Church was the first domino to fall, and it knocked over a series of others that lead us down to our own time. Pius VI not only faced an unprecedented assault—legal and physical—upon religion, but he also suffered his own arrest, exile, and death at the hands of these forces.

So here we find the concrete historical circumstances that led Catholicism in the 19th and part of the 20th centuries to adopt its “reactionary” character. It is easy to critique the Church of this era, as so many have, if one is ignorant of the actual calamities and violence that beset the Church from the time of Pius VI onward. Knowing his story helps us properly judge and understand our history down to the present time.

CWR: Would you summarize the plot?

Browne: The plot tells the story of the last two years in the life of Pius VI. It begins with a tragic incident, resulting from unrest, that causes the death of a French general living in Rome. The general was a friend and guest of Joseph Bonaparte, then the ambassador to the Papal States. His death provides a convenient excuse for the ruling Directory in Paris to carry out its desire to sack Rome, destroy the Papal States, and perhaps even put an end to the papacy itself.

Pius VI is placed in an impossible position. He is forced to accede to the French demands in the hope of maintaining peace, but, of course, the French quickly and mercilessly change their terms once they have gained a foothold in Rome. Ultimately, the French decide to expel the Pope from Rome. He spends about two years under house arrest in various locations until at last he dies in exile in the city of Valence in southern France (only a short distance from Avignon, as it happens) in August 1799.

CWR: Most Americans who know anything about the French Revolution have a rather romantic view of it, fed by the likes of Les Miserables. Might a more accurate image come from Dialogues of the Carmelites?

Browne: Yes, certainly. The French Revolution is not a movement to be emulated. It may have started with legitimate grievances, but it turned intolerant and violent almost immediately. The Church was its first victim, despite the fact that the curés, the parish priests, were instrumental in paving the way for reform at the Estates General. We see echoes of the Revolution all around us today in the worship of abstract principles, the implementation of “cancel culture,” and the aversion to religion. It is very dangerous. The legacy of the Revolution is the guillotine, and we must guard against it.

CWR: Who are the “good guys” and the “bad guys” in this story?

Browne: The “good guys,” I think, are the Pope and his faithful clerical assistants. Pius VI is not well known today and, even in his time, was thought of as more of a “worldly” than spiritual figure. He was the last pope to have a “Cardinal Nephew,” an office he revived after it had been abandoned by his immediate predecessors. But when the Church was under assault, he showed tremendous courage and unwavering adherence to the principles of religion. He was willing to compromise to preserve the peace, but he would not give way on what he saw as the patrimony of the Church, and that included the temporal power. He saw himself as a custodian—it was not within his power to give over the spiritual and temporal prerogatives of the Church. Here I think he exemplifies the notion of the servus servorum Dei.

The “bad guys,” I am afraid, are the forces of the Revolution. The Directory in Paris was firmly committed to the destruction of the Papal States and the papacy. They hated Catholicism and planned to replace it with something called “Theophilanthropy.” They used the excuse of the accidental death of a general to invade Rome and to destroy what was left of the States of the Church, the oldest kingdom in Europe.

CWR: What episodes or encounters would you highlight as most memorable and significant?

Browne: One of the most interesting encounters happens at the end of the play, after Pius’ death. The French would not allow the transfer of Pius’ body back to Rome, in accord with his final wish. Pius’ faithful assistant and companion, Msgr. Spina, remained at Valence for months after the Pope’s death, hoping to secure the return of the body. In October 1799, General Napoleon Bonaparte passed through Valence on his return from his wars in the east, marching towards Paris, where he would soon take full power as “First Consul.”
In Valence he meets Msgr. Spina, and the two enjoy a carriage ride in which they discuss the affairs of Church and State. Napoleon expresses sympathy with the plight of Spina and the tribulations of the Church; he indicates that he might assist in gaining permission for the removal of Pius’ body. The two men maintained a friendship thereafter, and Msgr. Spina, later a cardinal, became a key figure in mediating the complex relationship between Napoleon, the Church, and Pius VII, who would end up imprisoned 10 years after the death of Pius VI.

CWR: What is so stunning about the sack of Rome?

Browne: The sack of Rome is stunning for the flimsy pretext that “justified” it. The soldiers, once inside, plundered the city of art and treasure. They were ordered to deface religious buildings and physically to scrub the symbols of the papacy from churches and official places—a sort of damnatio memoriae. After only a short time in the City, the French occupiers proclaimed the foundation of a new republic to restore the ancient liberty of the Roman people, as in the days of Brutus or Cicero. In fact, they made the proclamation in the ancient Forum at the same time as the Pope and Roman Curia were assembled at St. Peter’s to sing the Te Deum in thanksgiving on the 24th anniversary of Pius’ coronation.

CWR: Conflicts with the state have plagued the Church from time immemorial: St. Ambrose and Theodosius; Henry II and Becket; Henry VIII and Thomas More; Henry IV and Gregory VII. Can you identify common elements in these conflicts? Was there anything unique in the one between Pius VI and Napoleon?

Browne: Yes, I agree that the struggle between Pius VI and the French was one in a long line of conflicts between Church and state. In the prior conflicts, however, the protagonists of the state were not anti-religion. The German Emperor or English King wanted to dominate the Church in some matters, such as the appointment of bishops, but they accepted the spiritual power of the Church and the papacy. In the Revolutionary Period, the state loathes religion itself. It wants not just to control it, but to transform it, even to eliminate and replace it: the papacy is a reactionary vestige of the unjust and unenlightened past that must be exterminated. The fundamental character of the struggle is different with the advent of the Revolution.

CWR: Are there any lessons for the Church today in the United States or universally?

Browne: I would say many lessons. As I already mentioned, the ideology unleashed by the Revolution is very much with us today. Those who know the history of the Revolutionary period are alarmed by what is happening now. We know that mania and frenzy, even when based in aversion to an actual injustice, can quickly lead to violence and the persecution of those deemed insufficiently loyal to an abstract, ill-defined cause. Hatred and haughty judgment of the past are also hallmarks of the Revolutionary spirit. Such feelings cause an unwarranted sense of moral superiority and are rooted in lack of proper knowledge, perspective, and humility.

For the Church, knowledge of Pius VI and Pius VII is critical for our self-understanding and our desire to emerge, at last, from the conflicts that have marked the period after Vatican II. We need a much broader perspective on the Church’s history than we usually see employed today, where the discussion is reduced to what might have been done or said in the years immediately before the Second Vatican Council contrasted against what was said or done in the years immediately after the end of the Council. Obviously, there is far more to Christian history than the events of 1962-1965 and, in truth, those events cannot be understood properly without knowledge of the Revolutionary period.

The events in the life of Pius VI put the Church on the road to its wild tribulations in the 19th century, to the rise of the all-powerful papacy, to Vatican I, to stern reaction against the modern world, and then to the counter-reaction that informed Vatican II and its aftermath.

It is a long, complex, and fascinating story that illuminates praeteritum, praesens et futurum (past, present and future), to paraphrase an old prayer of the Mass.