Catholics do not worship saints. While that may go without saying for most, if not all, of the present readership, this can be such a contentious point that there is no harm in repeating it, for the sake of absolute clarity. 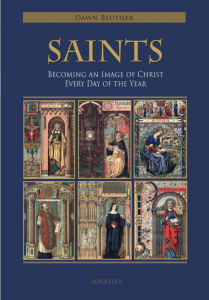 Catholics do, however, honor saints, revere them, and look to them as examples. There are many saints on the general calendar used by the Catholic Church, whose feast days are marked liturgically by the Church all over the world. But there are countless more saints, blesseds, and venerables to whom we can look for inspiration and guidance.

Dawn Beutner is a convert to the Catholic faith who writes regularly about the saints and how they can help us to lead holier lives. She has written a new book Saints: Becoming an Image of Christ Every Day of the Year (Ignatius Press, 2020), which looks at several holy exemplars on each day of the year.

Beutner recently spoke with Catholic World Report regarding her book and how the saints can be the example each of us needs in our striving for holiness.

Catholic World Report: How did this book come to be?

Dawn Beutner: I became a Catholic as a young adult when I met and fell in love with our Lord. But it was the saints who helped me translate my faith into everyday life. That is, as a new convert with almost no knowledge of the Bible, I had trouble relating to stories involving tax collectors and Pharisees. But I quickly connected to saints through stories about how they tried to deal with family members in a Christlike way, made vocation decisions, and even handled day-to-day issues.

Early on, I discovered a book which described one saint each day, and I read it daily for years. When I realized that there were even more Catholic saints than were in that book, I found and read more books about saints. Though I have a degree in engineering, I’ve worked as a technical writer for years, which puts you in the habit of mentally editing other people’s writing. I finally gave up simply reading saints’ biographies and began to write my own for the sake of my personal use.

CWR: Any given day has a dozen or more saints’ feasts (some of whom we have more information on than others). How did you choose?

Beutner: The short answer is that I chose saints who inspired me to become more like our Lord. That is, of the saints I chose, there was something in their lives that I wanted to remember throughout the day. For example, I know I need more of Saint Athanasius’ perseverance, and I would love to have a prayer life as deep as Saint Rose of Lima’s.

I chose saints that I believe could help anyone and everyone in their battle to become holy in daily living.

CWR: What was your research process like? Did you have standard sources you went to? How did you dig up the information?

Beutner: That’s the long answer to the previous question! My “research” into Catholic saints started with Butler’s Lives of the Saints, Concise Edition, Revised and Updated, edited by Michael Walsh, shortly after I entered the Church in 1990. I read it every day until the spine literally broke in two, and I had to buy another copy. My own book lists other resources I used, although I have to confess that I am inordinately fond of the priceless language in many entries of Butler’s Lives. My only problem with the complete versions of Butler’s Lives (there is more than one, and they’re four volumes long) is that there’s too much information to be comfortably read in a day, a problem I tried to remedy in my own book.

When I became serious about creating my own book of saints, I found the online resource CatholicSaints.info to be invaluable. Although the biographies on that site are short, they’re easy to access when you want to distinguish, say, one Saint Anthony from another Saint Anthony. NewAdvent.org (which contains the contents of The Catholic Encyclopedia from 1917) also has biographies of many great saints.

But it wasn’t until Ignatius Press had accepted my manuscript that I realized that almost every book about the saints that I’d read (including my own early version) had a major problem. That is, after Vatican Council II, many saints were given different feast dates in the Church’s liturgical calendar or were simply dropped from the calendar. The latest official Church list of saints, the Martyrologium Romanum, was issued in 2004 but is still only available in Latin. Many books about saints today use feast days from older calendars or even multiple older calendars, which makes it difficult to keep track of the true feast date for a given saint.

Learning about the Martyrologium was invaluable to me, as I reorganized my calendar of saints completely so that it would match the Martyrologium. That allows the reader to pray with and learn about the saints with the mind of the Church.

CWR: Were there any saints you wanted to include, but decided not to for one reason or another?

Beutner: Removing saints that were in my original manuscript but which weren’t included in the latest Martyrologium was painful. They are all so inspirational! It must also be said that just because the Church has removed a saint from nations’ liturgical calendars and/or the Martyrologium (which are two different things) does not mean that the saint is no longer a saint. It simply means that the Church prefers not to celebrate that saint liturgically throughout the entire world or in a particular country (in the first case) or perhaps may not have enough information to formally include that saint (in the second case).

As you said, there are anywhere from a half dozen to a few dozen saints on any given date in the Martyrologium Romanum, so there is no shortage of options. But since one of my major goals was to make all the entries for a given date short enough to be read in a single sitting, every day, it was necessary to omit many saints.

CWR: Was there anything particularly surprising or noteworthy you found in your research?

Beutner: Even in the age of the internet, it’s difficult to find information about many saints simply because their stories haven’t been translated into English yet. Saint Vincent Ferrer was a powerhouse preacher whose influence helped end a dangerous schism, but where are the books about him? There are even a few great saints who were so brilliant that they were named Doctors of the Church, such as Saint Peter Canisius, but not many of their writings are still in print. Even the stories of the multitude of great Irish saints have become hard to find.

Another conclusion that surprised me was that for almost every single day of the year, the Church celebrates a martyr, a group of martyrs, or multiple martyrs from different times and places. Even though it may sound gruesome to include a martyr every day in your morning reading, the reality is that this is a powerful reminder of the importance of our faith. Almost every day of the year, some man or woman woke up in the morning but was dead before evening simply because he or she refused to capitulate about believing in and/or following the commands of Jesus Christ. For the record, I found three dates in the Martyrologium Romanum for which there are no martyrs listed, but I decided not to publicize those dates in my book. God forbid that ISIS or some other enemy of the Church should decide to “fix” that for us.

CWR: The book’s subtitle is “Becoming an Image of Christ Every Day of the Year.” How can the saints help us do this?

My hope is that my book will help people the same way that reading about the saints has helped me over the years. Starting the day with a short lesson in holiness from the saints helps me re-orient my daily life before I enter into it. Take a typical date, such as March 30. On that date, the Church remembers a holy monk who wrote a spiritual classic (Saint John Climacus), a priest from a wealthy family who joined Saint John Bosco’s work and directed a college for poor, working men (Saint Leonard Murialdo), and a nun who was executed by the Nazis because she refused to remove crucifixes from hospital rooms (Saint Mary Restituta Kafka).

Even only knowing that much about them, don’t they make you think your daily “to do” list should be adjusted to include a bit more time for prayer, service, and standing up for the Gospel?

CWR: Do you have a great personal devotion to any saints in particular? Did you grow to love any saints during your research and writing of this book?

Beutner: Saints are just our friends in Heaven. I have some friends here on earth that I go to for my problems and joys—friends who’ve had cancer, friends who have kids the same ages as mine, and friends who are experts in subjects I don’t understand. I do the same thing with my friends in Heaven. I go to Saints Teresa of Jesus, John of the Cross, and Therese of Lisieux for advice about prayer. I learn daily about humility from the martyrs when I realize that my problems are trivial compared to theirs. Being a book lover, I have been studying the Doctors of the Church for years because of the light that they give to our faith.

But ever since I read Saint Louis de Montfort’s True Devotion to the Blessed Virgin and completed my first consecration to our Blessed Mother, I have seen the blessings of going to Jesus through Mary, in my own life. She is truly the Mother of God and our mother. There is another book that needs to be written to remind us that our Blessed Mother wants to lead us to her Son, every day of the year. Maybe that will be next for me.

About Paul Senz 109 Articles
Paul Senz has an undergraduate degree from the University of Portland in music and theology and earned a Master of Arts in Pastoral Ministry from the same university. He has contributed to Catholic World Report, Our Sunday Visitor Newsweekly, The Priest Magazine, National Catholic Register, Catholic Herald, and other outlets. Paul lives in Elk City, OK, with his wife and their four children.