Silent Angel is the hauntingly beautiful work of historical fiction, written by Antonia Arslan and translated by Siobhan Nash-Marshall, which tells of the Armenian genocide of 1915-23 in which 1,500,000 people were brutally murdered. It takes place in the plains of Moush, Anatolia, one of the valleys in the Armenian highlands. But this story does not dwell on the unspeakable horrors suffered by the Armenians. Rather, it concerns God’s goodness and the fruits of sacrifice. Silent Angel is a novella which weaves the tale of Armenian history together with the threads of five lives, miraculously spared, which band together to carry the Christian story, along with their own, out of the darkness of violent death. 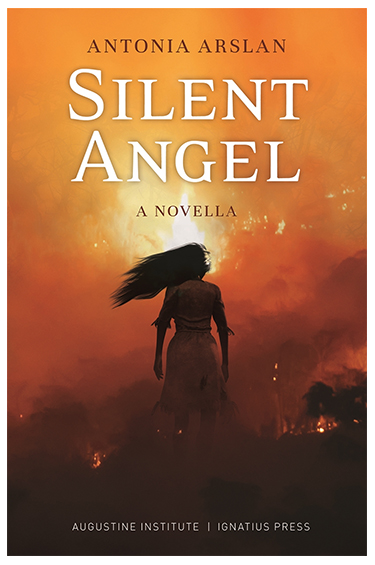 “The monastery was in flames.” This is how the story begins. After suffering humiliating losses to the Russians in the Caucasus, what was left of the Ottoman Third Army, in retreat, had systematically slaughtered the people of Moush; a ghastly march which culminated in setting ablaze the Holy Apostles Monastery founded by St. Gregory the Illuminator in 301. Burning atop the mountain, the monastery becomes an apocalyptic beacon which draws to itself the handful of people who managed to escape.

A remnant of five survivors trudge toward the monastery. Kohar and Anoush are two young Armenian women; friends who unwittingly escape the doom of their village by seeking refuge from the heat in an afternoon swim. When they return, they realize why they had the pleasure of bathing in solitude. The butchered bodies of those whom they love lie strewn in their homes and in the streets. Making their way through the carnage, the friends manage to rescue a young boy, Hovsep, who became an orphan as his family was tortured and murdered before his hidden eyes. Leaving their desecrated village behind, the three begin the climb toward the monastery, and along the way, encounter two Greeks who had made their home among the Armenians, Makarios and Eleni. Once childhood sweethearts whose love was thwarted, the two now enjoy a mutual respect and treasured companionship. They, too, are fleeing, leaving behind a beloved way of life. All five refugees meet accidentally at a stone basin fed by a small spring, which was used for centuries by pilgrims on their way to the great monastery.

Over the course of the narrative, this meeting develops into deep, abiding friendships; the bond among these fellow travelers will be one of profound solace. The ways Arslan expresses the affection which flourishes among them is truly touching: the brush of a cheek, the frequent holding of hands, the scent of a mother intoxicating to an orphan, all tell a story of their own about how real the needs are of the affective part of the human soul. As Arslan observes, “even in the most tragic moments affection is consoling.”

The five refresh themselves in the basin, not only to wash away the evils of the previous night but also to prepare themselves for the journey ahead. This cleansing serves as a sort of baptism. Just as Jesus comes to John to be baptized before facing the temptation in the desert in the gospel accounts, the five wash so as to prepare for their own trials. And like the angels who minister to Jesus once he defeats Satan in the desert, a Silent Angel accompanies the five on their journey, offering them both protection and guidance.

When they reach the monastery, the group confronts desolation and death. They find the monks murdered, and desolation hangs about the vestiges of the once glorious site. Each one of the refugees had harbored a faint hope that maybe some villagers escaped and took shelter in the monastery. “Now,” as Arslan writes, “they all feel the weight of total abandonment, an apocalyptic dream, the end of their world,” a sentiment shared by Jesus’ disciples after the Crucifixion. All their hopes had vanished, the sun had turned to black, and their confusion and sorrow left them disillusioned and disoriented.

As the adults consider their next move, the boy, Hovsep, drifts away following his instinct of hunger toward the monks’ chicken coop. Eleni, the Greek midwife, notices and follows. She watches from a distance as he advances toward the last remaining hen brooding in the back of the coop. The instincts of her trade tell her to stay his hand from seizing upon the egg, from disrupting nature’s beautiful course of a mother bringing life into the world. But Eleni decides otherwise. She reflects, “If there is no more future, no more hope in that land, for her and Makarios, who are Greeks and foreigners, then what kind of fate is being woven for a child of that damned race.”

This poignant scene signals a turning point in the novella. Arslan paints for her reader a picture of the passing away of an old order but does not linger over it in despair. Instead, she points to a new order emerging: one which only becomes possible through the workings of divine providence. The five have witnessed the death of the life they loved. Now they must look to God to provide a new one. Arslan reveals the providential sign of this in, of all things, the chicken coop. As Hovsep appeases his bodily hunger with the last egg, something magnificent appears which seeks to satisfy the ultimate human longing. Eleni spies it – hastily covered with straw by the monk who spent both his life and death preserving it – The Homilary of Moush, a medieval illuminated manuscript, a relic protected by the monks of the Holy Apostles Monastery for centuries. Gazing at it, Eleni is transfixed:

[F]igures that were filled with life, those illuminated capitals, the delicately interlaced decorations that seem, like enchanted animals, to flash along the margins of the pages, and the Armenian letters that stretch one after the other like a mysterious embroidery.… She looks at it as if it were a musical score, with its numinous letters that rise and fall on the lines, and she seems to hear the solemn chants of the rituals, the deep voices of the men who ask for God’s forgiveness.

It is this holy relic, with its history of mysterious healing powers, which will provide a new way of life, an apostolic way toward salvation. The five quickly recognize the book as proof of divine providence surviving seven centuries of destruction. All of them marvel at its beauty. But if the mission to preserve and protect the book makes itself clear – “by saving the Book, they will save themselves” – the difficulty of how this is possible is perplexing. The Homilary of Moush measures nearly three feet long and weighs sixty pounds. It will be too great a burden for even the strongest of them.

As children often do, little Hovsep offers the unthinkable solution that they split the book in pieces. Kohar sees the wisdom in this and agrees. They will divide it in two, a load to be shared by Anoush and herself. After the five lovingly clean and prepare it, Makarios slices the book in half, evoking an image of biblical sacrifice. Looking around the monastery, he finds the unmistakable elements of Jesus’ Passion – leather cords, wooden boards and sturdy nails – in order to fashion a “cross” which will evenly distribute the weight of the two segments of the book across the back of the two carrying it.

Here, it seems, stands a metaphor not only for the apostolic mission of all Christians, but more particularly for the Church of the present age. Like the monks of the Middle Ages who, with great care and devotion, preserved holy books and manuscripts amidst an often turbulent world, this odd collection of “ill-assembled creatures” is being called to bear the story of salvation history. Arslan articulates this mission:

There is a reason why it [the Homilary] has come into their hands. It means that the angels who watched over it decided to give it not to wise priests who touched it “with immaculate hands,” as the liturgy proclaims, but expressly to them, this small company of three women, a boy, and a man, fleeing toward the mountains, and united by chance among the ruins of the monastery.

Arslan’s special emphasis on the task of the women in the group bears a striking resemblance to the charge given to the first Christian women of the Gospels who made their way to Jesus’ tomb on Easter morning. The angel who greets them issues the charge: “go quickly and tell his disciples that he has risen from the dead…” (Mt 28).

In like manner, Kohar and Anoush carry out their mission, guided and guarded by their own Silent Angel who urges them on and shelters them along the way. With the protection of his sleepless eye, the women quite literally bear the burden of the good news of Christ’s resurrection away from the tomb of their beloved Armenians to the ends of the earth, or in this case, eastward toward Russia. In the twists and turns of Arslan’s tale, the pieces of the book suffer separation only to finally be re-united when they reach the Russian monks in the Holy Seat of Etchmiadzin.

As Arslan tells us at the end of the novella, the halves of the Homilary of Moush now rest together in the Matenadaran library in the Armenian capital of Yerevan. Her story finds its origins in the memories and legends embedded in Armenian consciousness and corroborated by published firsthand accounts and photographs. The courage of Kohar and Anoush is at one with the courage of the two historical women whose heroism both protected and transmitted an exquisitely illustrated, life-giving story.

Like every Christian story, the Homilary of Moush imitates the gospels which tell the saving story open to all with “ears to hear” throughout the ages. But woven into the Homilary are layers upon layers of individual lives grafted onto the story of the one whose life, death and resurrection makes sense of and redeems all others. As an illuminated manuscript, it draws its readers, and even the illiterate, into its exquisite garden:

Every detail, when inspected up close, is a joyful surprise; the elegant columns hover over the page, while the spaces they enclose are filled with lines and lines of Armenian letters, as though the writing itself were an essential part of a harmonious and complex figurative world, intelligible even to simple souls.

Copying and illustrating the stories of the Bible, the Armenian monks painstakingly left markings of their own lives in the margins, as they wrote down meditations and accounts of their own specific history woven into that of salvation history as a whole. And carrying that multi-layered story to safety, the two women give their lives for the sake of keeping the Armenian culture, rooted in Christian tradition, very much alive.

In a way, Arslan’s story is like the biblical one of Babel. Time and time again, the grave sins of humanity wreak havoc and ruin on God’s creation. That which is naturally intelligible and beautiful collapses under the weight of pride and wickedness. And yet, the storyteller collects the scattered fragments, re-ordering and re-presenting them, and offers it to her reader as a “fruit from Armenia.”

About Kelly Connelly 1 Article
Kelly Connelly teaches in the Philosophy Department at Manhattanville College. She earned a doctorate in Systematic Theology from Boston College and has taught philosophy, theology, and literature in recent years. She is a wife and a mother of six children.