In 1952 Evelyn Waugh visited Goa to attend celebrations marking the four hundredth anniversary of the death of Saint Francis Xavier. Impressed by the devout and traditionally orthodox but distinctly non-European religiosity of the local Catholics, he penned into his diary the simple entry “Belloc ‘Europe and the faith’ my foot.” While some have argued that the intended meaning of the pugnacious Belloc’s famous dictum was more modest than his choice of words, one can hardly fault Waugh for taking it at face value and roundly rejecting it.

And one can only imagine that, if he had lived to true old age, Waugh would have had a very different reaction to the more nuanced understanding of the relationship between Catholicism and European culture which the now pope emeritus Benedict XVI has been prominently articulating for over three decades and to which he now returns in Western Culture: Today and Tomorrow. 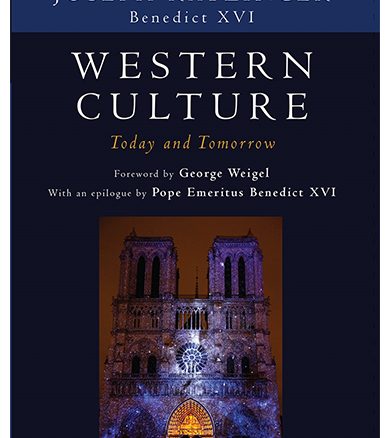 Benedict (and in this he is like Belloc) understands “Europe” primarily in religious and cultural terms rather than geographic ones. That is, all those societies which were predominantly Catholic at some point in their history, whose culture was shaped by a combination of Christianity with the classicism of the Greeks and Romans, which were first located on the landmasses surrounding the Mediterranean Sea until the Islamic conquest of North Africa and Mediterranean Asia, and finally spread throughout the geographic continent of Europe.

Where Benedict outclasses Belloc is in his ability to distinguish, or at least to articulate, the difference between the substance of Catholic belief and cultural accidents of Catholic Europe.

Despite the fact that Benedict is careful to allude to the foregoing distinction, and despite its importance for some of the topics which he analyzes, most of Western Culture centers not only Europe’s cultural accidents, how something like the totality of traditional European culture might be preserved or the relationship of Catholics to that totality. Its primary concern, rather, is too look at the religious and moral (as well as the irreligious and amoral) beliefs and presuppositions which form and are formed by the cultural and political life of Europe. In this it resembles Russell Kirk’s America’s British Culture, a work which, had it not been for a single chapter on literature, could easily have been titled “America’s British Political Culture” as it left aside British influences on such varied aspects of American culture as architecture, clothing, food, and sports.

In the case of Benedict’s book, such a fairly narrow focus has distinct advantages for readers in countries outside the European cultural world, plus a more limited one for those in western but non-European nations such as our own. Its reflections on many of the fundamental underpinnings of the life of society are easily transferable to such contexts. On the other hand, however, there is little material for those European readers interested in Benedict’s thoughts on the ways in which Catholics of their continent can relate to current developments in such areas of life as the arts.

Many of the more quasi-universal reflections inWestern Culture concern topics upon which Benedict frequently focuses—the formative influence exerted by Christianity on Europe’s historical way of life, the religious and moral presuppositions of politics, the dangers of secularism—complementing and amplifying various lines of thought which will be familiar to those with a basic knowledge of his work. Some, however, concern matters which only the most habitual readers of his writings are likely to have encountered elsewhere.

Perhaps the most unexpected of the latter is a vigorous defense of Catholic teaching on just war, specifically the teaching that war can at times indeed be justified. Benedict being Benedict, he does so with considerable intellectual finesse, distinguishing between practical pacifism in the contemporary world and absolute theoretical pacifism. If World War II provides convenient, predictable examples for reducing theoretical pacifism to absurdity, Benedict’s nuanced mind more adeptly reduces practical pacifism to irrelevancy—pointing out that arguments against war made on the basis of contemporary conditions can only concern war under precisely such conditions rather than war as such. He also, somewhat more implicitly, makes it clear that contemporary conditions can only have bearing on the question of initiating a conventional war between nations and their armies—stressing at some length the importance of using military force as a defense against the aggressive violence of terrorists. One can only wonder if such arguments were made with one eye towards disputes over the inherent (as distinct from circumstantial) legitimacy of capital punishment, similar logic applying in both cases.

Another topic to which Benedict gives more sustained analysis in Western Culture than I recall finding in others books of his is that of political conservatism. He argues that the idea of “conservatism” is unattractive to many people because it implies a sort of “immobility” devoted to the status quo and uninterested in working to improve society. The most intellectually serious conservatives will have considerable sympathy for such an analysis, much of “conservatism” being no more than unthinking acceptance of the ephemeral status quo, lacking the firm commitment to unchanging principles needed both to implement necessary positive changes and to reverse the negative ones by which we are plagued.

But I do think that broader attitudes against which Benedict has long battled—hatred of the past and of tradition, refusal to be bound by absolute moral principles, empiricist assumptions—are considerably more influential factors than the perception of immobile unwillingness to address real problems. Christianity is not so much rejected because it is associated with conservative immobility as conservatism is rejected because of what it shares with Christianity.