The papacy is a nearly 2,000-year-old institution. Catholics understand the papacy to have been founded during the earthly ministry of Jesus Christ, when he told Peter, “You are Peter, and on this rock I will build my Church” (Matthew 16:18). The Petrine office has gone through many changes since that time, to put it mildly. There were dizzying heights of temporal power, catastrophic lows of debauchery and sin. In the 20th century, the pope became a global source of m 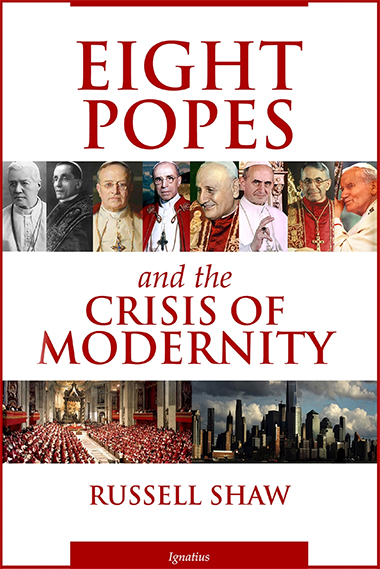 oral instruction unlike at any other time in history.

In Eight Popes and the Crisis of Modernity (Ignatius Press, 2020), Russell Shaw examines how the popes of the 20th century—from St. Pius X through St. John Paul II—tackled the issues facing the Church in the modern world. At the turn of the century, the pope’s temporal power was significantly diminished, but his moral authority was on the rise.

There’s Pope St. Pius X, who wrote against the modernists and promoted a deeper devotion to the Truths of the Catholic faith; Pope Benedict XV, who led the Church during the First World War; Pope Pius XI, who witnessed and fought against the rise of Hitler, Mussolini, and European totalitarianism; Pius XII, who led the Church for more than 19 years, including the turbulent years of the Second World War; Pope St. John XXIII, whose brief papacy included the “flinging open” of the “windows of the Church” at the Second Vatican Council; Pope St. Paul VI, who resumed the council and brought it to its conclusion, and guided the Church through the turbulence of the late 1960s, the sexual revolution, and more; Pope John Paul I, whose papacy lasted only 33 days; and Pope St. John Paul II, that towering figure who led the western world to defeat communism and bring the Soviet Union crumbling down.

Shaw recently spoke with Catholic World Report about his book, and the role the papacy has played over the past century, and what future popes can learn from these predecessors.

Catholic World Report: The chapters of the book started as articles for Our Sunday Visitor—how did they end up as a book, and what sort of changes did they go through?

Russell Shaw: I had committed to writing a series of short profiles of modern popes for Our Sunday Visitor. As I got into it, the thought occurred that with some expansion the profiles might make an interesting book. But I needed a unifying theme, and the obvious one was the end of modernity, which was also the title of a book by Romano Guardini. I read the book and got a lot of helpful ideas, including the insight that at the heart of the crisis of modernity is the human person—what a person is, what human rights and destiny are, how human persons ought to treat one another.

CWR: The articles for OSV went from Bl. Pius IX all the way through Pope Francis. Why did you focus on eight of these (St. Pius X through St. John Paul II) for this book?

Shaw: I stuck to the eight popes of the 20th century for two reasons. First, many writers, including Guardini, situate the end of the modern era in the 20th century, and we are now said to be in the postmodern age. Obviously you can’t say the modern era ended on some particular date, but you can say the crisis was a process that extended through much of the last century and covered the pontificates of these eight popes. The second reason is distancing—we are too close to the pontificates of Pope Benedict XVI and Pope Francis for me to feel comfortable speaking definitively about either.

Shaw:  From 1969 to 1987 I was in charge of media relations for the National Conference of Catholic Bishops and United States Catholic Conference—the predecessors of today’s USCCB. During that time, I was press secretary for the US delegates to several synods of bishops in Rome and for the American cardinals at two papal election conclaves, a consultor of the Pontifical Council for Social Communications, and writer several documents for that body as well as several papal statements. All that gave me a pretty good acquaintance with the Holy See.

CWR: Did you find any of these popes more challenging to write about than others?

Shaw: At the start I didn’t know much about the pontificate of Pope Pius XI. What I found out was that it was long—seventeen years from 1922 to 1939—and highly complex in that it took in the rise of fascism, Nazism, and Soviet communism, the Great Depression, the violent persecution of the Church in Mexico and Spain, the drift toward World War II, and the early stirrings of the revolution in moral values that erupted with a vengeance two decades later. Pius XI had to deal with all those things. Not an easy story to tell, but a fascinating one.

CWR: Was there anything that pleasantly surprised you in your research?

Shaw: I was pleased, though not terribly surprised, to find that Pope St. John XXIII had a lot more intellectual substance than the popular image of “Good Pope John” would suggest. Yes, Pope John really was good. But he was also, if I may use the expression, a smart customer with a wealth of practical experience.

CWR: You write that Benedict XV “is often said to be an unknown pope, but he deserves better.” Out of the 20th-century popes, he and Pius XI are probably the least well-known. Why is that?

Shaw: There are several reasons why Benedict XV isn’t better known. For one thing, although he was an active, intelligent, and courageous pope, he was not a dominant personality with a media-friendly presence. Furthermore the media of his day tended not to view the pope as a significant player on the world scene and so weren’t all that interested in the papacy.

CWR: Each of these popes confronted the problems of modernity in unique ways. Do you think any of them were particularly successful, or any particularly unsuccessful?

Shaw: The pontificate of Pope St. Paul VI was in some ways a tragic story. Paul certainly engaged the big issues of his times and received an enthusiastic response at first—the reaction to his famous “no more war” United Nations speech illustrates that—but the good feelings and the enthusiasm came to an ugly end with the vicious reaction to Humane Vitae and its reaffirmation of the condemnation of contraception. Pope Paul has been vindicated by events since then, but at the time he was widely written off.

CWR: The Second Vatican Council gets its own chapter in this book. What is different about Vatican II’s approach to “the crisis of modernity” from that of the two popes of Vatican II, Sts. John XXIII and Paul VI?

Shaw: As a matter of fact, I see more similarities than dissimilarities between Vatican II and the popes you mention. Gaudium et Spes, the Constitution on the Church in the Modern World, is often criticized for being too optimistic, taking too sunny a view of the modern world, and I suppose there is some of that in its rhetoric. But the Council also saw many grievous problems and abuses in modern times, and it wasn’t hesitant in pointing them out. And the same might be said of the popes. All three—the Council, John XXIII, and Paul VI—were shrewd observers and serious critics of the world around them.

CWR: What can Pope Francis (and his successors) learn from these popes?

Shaw: Continuity. Popes do well to accept and build on the legacy of those who came before them. Adaptation—“development,” in Newman’s sense—is always needed in response to changing circumstances. But authentic development—and Newman insisted on this, too—is never at the expense of what is essential in the tradition. That is a cardinal rule for Pope Francis or any pope to bear always in mind.