King Richard II (1377-1399), in the 14th century, formally dedicated England to Mary, giving the country into her care as her Dowry. This has long been of great importance for Catholics in England. A painting, known as the Wilton Diptych, shows the king kneeling before Our Lady, with a parchment in his hand which reads “This is your Dowry, O pious Virgin”.

Some historians believe that the tradition goes further back, with claims that the original dedication was made by St Edward the Confessor, our last Saxon king before the Norman Conquest. What is clear is that the traditions runs deep—it is associated in the minds of many Catholics with the great beauty of our countryside, lush and green, especially in springtime around the time of the feast of the Annunciation—and with the great number of churches dedicated to Mary.

And this week (Sunday, March 29th) the Bishops of England and Wales are formally re-dedicating the country, through the faith of its people, to Mary, in a long-planned act for which people have been preparing for the past eighteen months.

But no one could possibly have foreseen the extraordinary circumstances in which this re-dedication is taking place. Instead of crowds gathered at Walsingham, there will be online sharing of prayers. Instead of large congregations at cathedrals, with choirs and special music, there will be simply each bishop, united in prayer but physically standing alone, making the formal dedication, all at the same time and across the country, surrounded by the silence of the national lockdown enforced by the authorities because of the Coronavirus.

To say that the situation is unprecedented is to state the obvious. To explore the background is rather intriguing. The idea of a re-dedication has been something long cherished by enthusiasts, led by Catholic laywoman Antonia Moffat. Her prayerful, courteous, and persistent efforts brought a response when the bishops decided to take action and a nationwide program of prayer and preparation was rolled out. She believed that God was calling Catholics in England to re-dedicate our nation to Mary, and repeated this message by every quiet means—and it got through.

A leading figure in all this is Mgr. John Armitage, rector of the national Shrine of Our Lady of Walsingham. This shrine will mark its 1,000th anniversary in 2061. Its origins lie in the uncertain final years of the reign of Edward the Confessor, immediately before the Norman Conquest of 1066. With militant Islam abroad and political uncertainty at home, the royal manor of Walsingham— it lies some six miles from the North Sea, on the eastern coast of England—became the focus of an extraordinary Marian devotion. The lady of the manor, Richeldis de Faverches, said that the Virgin Mary had appeared to her, and asked her to build a replica of the holy house at Nazareth. People would be able to come on pilgrimage there, at a time when Nazareth itself was closed to them.

Nazareth is of course where the Annunciation took place, where the Incarnation happened. Walsingham as “England’s Nazareth” is central to the story of the Faith in England. Destroyed under Henry VIII, revived in the 19th century, Walsingham thrives today. And the re-dedication of England to Our Lady, in this extraordinary time of national lockdown, now adds a new chapter to the story—and one that over the next years will likely become almost legendary.

Our poor country so badly needs Mary’s protection. The heart-breaking collapse of marriages, the killing of unborn children by abortion, the cruel imposition of vile propaganda under the guise of “relationships education” in schools, the nonsense promoted on “transgender” issues—all these cry out the need for a new evangelization.

So it quite extraordinary and providential that the re-dedication of England should come at this time, when it is most needed. It could have happened in the late 19th century at the height of the Catholic revival, Newman’s “Second Spring”. It could have come during World War II, with the sense of national need in the hour of Britain’s peril. But it comes now, when the streets are silent, churches and schools and shops closed, and even everyday neighborly contact is restricted—when the whole nation is somehow locked into nothingness, with a grim intensity for which the word “lockdown” is horribly accurate.

You can tune in Walsingham at any time—there is prayer throughout the day, Mass at 9.30am and at 6pm, and talks and other devotions. The message is one of hope and confidence. The Angelus, the prayer celebrating the Incarnation, holds special significance at Walsingham. On a normal Spring Sunday, there would be good numbers at Mass and preparations for the great pilgrimages of the summer, when long processions wind their way down the Holy Mile chorusing “Ave Ave Maria” and huge marquees are erected in the neighboring fields for Mass and for youth gatherings. Instead, even Sunday Masses are said by a priest standing alone.

The angel spoke alone to Mary at Nazareth two millennia ago. The Wilton Diptych shows Richard II kneeling silently before Our Lady in prayer. In the stillness that surrounds the re-dedication of England as Mary’s Dowry, there is a sort of drama. “O Mary, conceived without sin, pray for us who have recourse to thee.”

• Related at CWR: “Her Immaculate Majesty: The Other Queen of England” (March 1, 2020) by Joseph Pearce 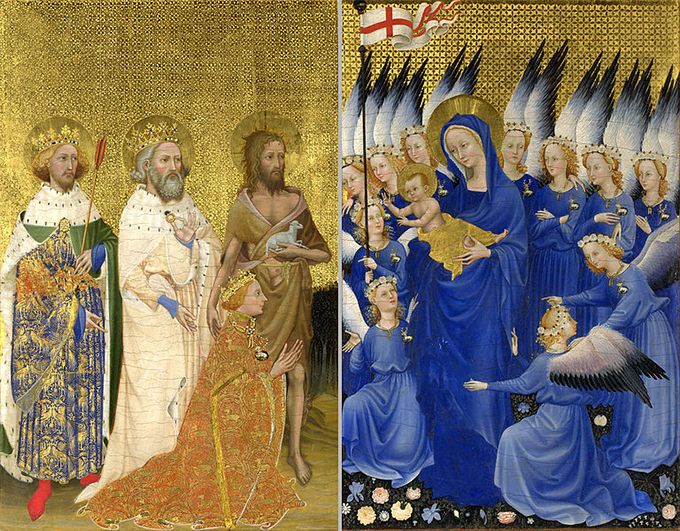 About Joanna Bogle 77 Articles
Joanna Bogle is a journalist in the United Kingdom. Her book Newman’s London is published by Gracewing Books.